Ecuador’s alternatives on Assange’s asylum. What would be the consequences? 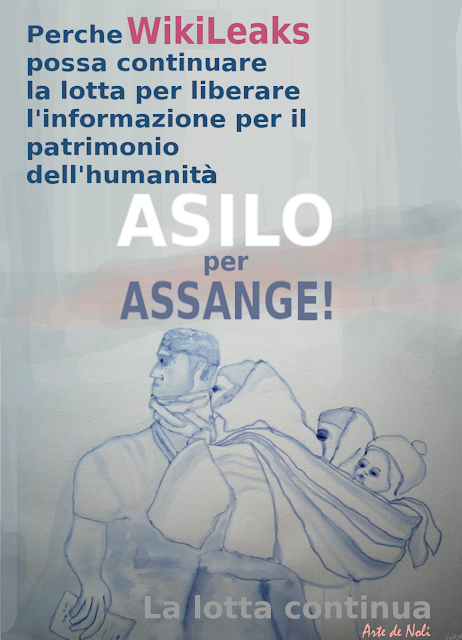 Alternative One: Ecuador does accept the request for asylum

Assange packs his belongings in the company of the Ecuadorian ambassador, Ana Albán, out of the diplomatic representation in London. Escorted by Scotland Yard goes to Heathrow Airport. Then Assange is off for Quito, on a plane sent by the Ecuadorian Government.

Once in the capital he meets with President Rafael Correa, who is backed by a number of prominent personalities worldwide . . .

That would be the best scenario, both for the country and for Assange. But for that to happen, first the government must give the Australian political asylum. Also, Britain should grant safe conduct to enable Assange moved from the Embassy to the airport.

The diplomat Abel Molina believes in the principle of extraterritoriality. He explains that the embassies, consulates, planes, ships and warships abroad are considered national territory of they country they come from, so the British authorities can not intervene or interfere.

One option raised by Molina is that England give save-conduct (transit pass) to Assange if Ecuador accepts asylum. This kind of pass is given in cases when the State granting asylum, in this case Ecuador, accepts the asylum request. The [procedure should be] then: The Ecuadorian Ministry of Foreign Affairs would deliver a document that certifies [the asylum has been granted to Assange] and then they would ask formally the safe-conduct.

England simply could not answer that request from Ecuador, and that would force Assange to stay at the Embassy for an indefinite time, even years. And that is a situation that, according to diplomatic sources, Ecuador wants to avoid at all costs.

Molina explains that although Assange is considered “political criminal”, who categorizes “the crime” is the country that analyses the request for asylum. Further, Ecuador's constitution has a humanistic spirit and guarantor of [human] rights. Just under this principle is that Ecuador hosts thousands of Colombian refugees in the country.

According to the diplomat, the extradition to Sweden is just a façade [covering] the political intentions of the U.S. government, who has been exposed [by WikiLeaks].  Besides, In the Swedish legal system is not need evidence to take a person to trial, such as in the case of Assange’s alleged violations.

This view was confirmed by a member of Anonymous Operations Sweden (worldwide group of "hacktivists, Sweden version) in an interview via Twitter.

"The Swedish government is working closely with U.S. (...); If [Ecuador] refuses the asylum, the last ray of hope for truth and justice will be ending. At the moment there is a country that stands out: Ecuador", said the representative of Anonymous in the Scandinavian country.

If Assange lives in Quito, Ecuador's capital will become WikiLeaks world headquarters. The Australian has said he wants to continue his mission in this country, which would give international prestige to Ecuador. In practice it would be a great political scoring for the government, which would leave the allegations of restriction on freedom of expression groundless.

But in terms of international relations, things would complicate. American hawks would pressure their government to punish Ecuador.

The Washington Post has already called for ousting Ecuador from the trade-preferences list, and the president of the Intelligence Committee, U.S. Senate, Dianne Feinstein, would push in that direction.

And if a Republican candidate would become President, the U.S. sanctions against Ecuador would be a real threat.

Alternative Two: Ecuador does not accept the request for asylum

The Ecuadorian Government says no to Julian Assange and he must leave the Embassy in London. There, Scotland Yard arrests him and a few days later he is extradited to Sweden. In that country, [Assange] is imprisoned for an undetermined time, or he is eventually sent to United States of America where he could spend the rest of his life behind bars.

In the best of cases, a) Sweden do not file charges against Assange -- he is freed; b) the U.S. does not pursue Assange’s extradition. However, at this point, that [scenario] seems unlikely: Dianne Feinstein, the chairwoman of the Senate Intelligence Committee has already asked for the Australian to stand trial,  is prosecuted and the Department of Justice confirmed that the country investigates [Assange] on the WikiLeaks matter.

According to the expert in international law, Renata Avila Pinto, Assange fears being extradited to Sweden and then to the United States is not unfounded. This is because Sweden has extradited since 2000 all who have been required by the Americans. In addition, the Swedish government has a lousy record due to [the secret] renditions to the U.S. when two refugees where sent to Egypt, where they faced torture.

"Sweden and the UK are military allies of the United States. The documents released by WikiLeaks had an enormous positive impact on reducing the military presence and the resurgence of civil movements around the world. However, to reduce armies and weapons has an adverse impact to those who benefit from the huge conglomerate of the defense industry worldwide," said the expert.
Marcello Ferrada de Noli, one of the founders of the Revolutionary Left Movement (MIR), organization that was active during the Pinochet dictatorship, supports the position of Avila and considers four aspects that Ecuador would have to think if they decide to reject the asylum application of Julian Assange: a) the actual situation of Julian Assange as a prisoner in Sweden, b) his situation regarding the possibility of Sweden opening a legal process against him, c) the position of Assange in terms of "legal security" and eventual infringements of his human rights, and c) the risk of extradition to the U.S., which can be a legal issue or "extra-legal" issue.

The Latin American Information Agency (ALAI) said that a trial for which Assange [would be eventually] required lacks evidence, because the two women who have accused Assange agreed to have sex with him. What is most striking, as the representative of ALAI said, is that when the original prosecutor, Maria Kjellatrand found no evidence of the alleged violations, the accusers’ attorney and spokesman for the Social Democratic Party, Claes Borgstrom, sought a prosecutor from among his contacts. That was Marianne Ny, who issued the arrest warrant and the Interpol alert about Assange while he was at his residence in England.

ALAI members believe that if Rafael Correa denied the request for asylum, he would lose the reputation it has earned during his term at the different social movements worldwide.

Precisely, photography of Assange outside the Embassy and shortly after being handcuffed by the British Police would become a burden for the Presidency of Rafael Correa.

The recognition from social movements that Correa has won in 5 years of would vanish in minutes. In short, his leadership would be weakened.

However, as one of the members of Anonymous who declined to give Sweden its name to this Journal, "I think Ecuador has already dealt with the U.S. before and won. "