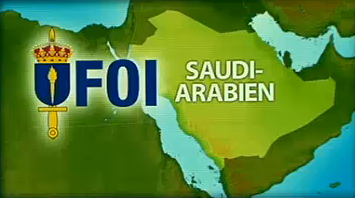 Former FOI Research Director Dick Sträng accuses today Swedish Defence Minister Sten Tolgfors of "not telling the truth" about the FOI project in Saudi Arabia. Dick Sträng's statements today's in Dagens Nyheter ("Tolgfors talar inte sanning om projektet"): "The Defence Ministry had been informed about the project to help Saudi Arabia to build an arms factory", "I was asked (ombad) by the then FOI General Director to open the (fake) company". ["FOI" stands for Swedish Defence Research Agency – state institution subordinated to the Ministry of Defence]. Also SvD reports today that the establishment of the fake company "Swedish Security and Technology Innovations, SSTI" was done "at request" (uppmaning) of former FOI's General Director.

---
Bo-Göran Bodin and Daniel Öhman, the two journalists that disclosed in Ekot the Swedish arms-technology deal with the Saudi dictatorship, told today 7 of March at a the TV program Gomorron Sverige that they were interviewing high officials at  Defence Ministery about the subject during their research for the report breaked in Ekot. This revelation fits well with the hypothesis yesterday in Professors blogg, on that FOI possibly knew that the exposure would come and perhaps the Attack of FOI against WikiLeaks 29 February may have been a diversion maneuver (see down below). Curiously, when the journalist started to list in the TV program the proofs they had on the veracity of the affair, they were - as appeared -  rapidly taken out from the broadcasting (the anchors move forward to the next, completely different subject). On other developments, Defence Minister Tolgfors denied today that Sweden is currently building an arms fabric in Saudi Arabia, but he acknowledged that Sweden had made available to the Saudi dictatorship "consult" assignments on the issue.

FOI, the Swedish Defence Research Agency – subordinated to the Ministry of Defence of “Neutral” Sweden, was yesterday reported of helping in complete secrecy - totally behind the Swedish public and Parliament (according to declarations of the Vänster Party chairman Jonas Sjöstedt) – the building of a missile factory on behalf of the notorious dictatorship in Saudi Arabia. The breaking news emerges just few days after FOA ungrounded accused WikiLeaks founder and editor Julian Assange of illegal actions against Sweden. Professors blogg asks, FOA, Who was in fact transgreding the Swedish laws?
By Marcello Ferrada-Noli
March 7, 2012

Economic, geopolitical or other government's interests have apparently finally seized control of the information in the Swedish media about this scandalous affair.  In today's soffa-program "God Morning Sweden" the two journalists that made the disclosure (in the radio program Ekot) were interviewed to answer some questions about their scoop, which Öhman and Bodin extended by also explaining the political context of such operation. Perhaps that was not expected. In a given moment the interviewing journalist asks, "But FOI's General Director, Mr Lind, have denied this, what indicates that he is wrong and you are right?" [Vad är det som säger att ni har rätt och han har fel?] But then when journalist Bo-Göran Bodin started to review the list of documents or proofs they have gathered for their disclosure, he just "disappear" from the screen in the middle of his talk - as if the program suddenly "blackout" - the program logo is shown instead in the screen, the camera moved to other set and the interviewing journalist changed to a complete other subject (on literature and entertainment). No one cares to give an explanation; No one cares to asks for an explanation. 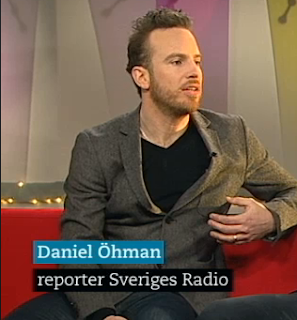 Also, the State television had announced earlier today that a major reportage on the events was due to be transmitted in the in-depth News program Aktuellt of 21.00. However, the broadcasting was not, as usual is, made available on-line (I checked last time at 22.20. SvT showed instead the Aktuellt program of an earlier day!). [Update 8/3, 10.00: On-line now].

In this Aktuellt program FOA chief Jan-Olof Lind stated clearly that there is no Swedish participation in a factory building in Saudi Arabia. He says also that he closed down the fake company project (bulvan företag upplägget) led then by a FOI official for two years ago (Dick Sträng, picture at right).

But when Lind was asked by reporter Kerstin Holm if he would have done that (closing down the project) by order from the government, Lind said so it was not case, that it was his own initiative after reviewing the situation.
It was revealed today in a new report by Ekot that the very Swedish top-authority in charge of the arms control export  (Inspektionen för strategiska produkter, ISP),  Mr Andreas Ekman Duse, participated in the secret negociations and dinners with the Saudi Arabia delegation and the FOI officials, during the discussions of the weaponry technology agreements.  ISP is  the authority entrusted by the Swedish people precisely to control that such deals should NOT occur outside the constitution! 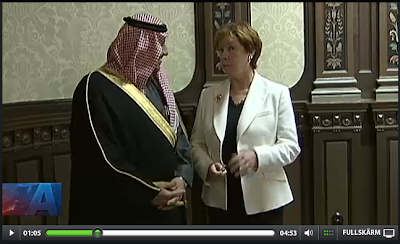 The agreements were first made in 2005 by the Social democratic government of Göran Persson.Here in the picture at right the former Defence Minister (in the social democratic government) Leni Björklund and the Saudi envoy.
While some pro-official journalists, in line with he lies of government officials, have already started to question the veracity of declarations made by the former Research Director of FOI Dick Sträng (Sträng told yesterday FOI had ordered him to buy and register a fake company aimed to implement the contacts with the Saudi dictatorship behind Parliament control - no journalist have occurred to ask Dick who otherwise paid the 100 000 Swedish Kr that such transaction demanded. 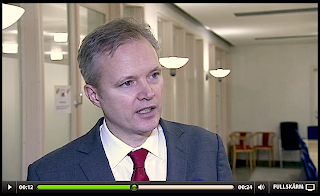 Defence Minister Sten Tolgfors (above), politician of the Moderate Party (right-wing conservative), most known for his vehement advocacy for a further military collaboration with the U.S., said yesterday (March the 6t, 2012) in SvT:
"I cannot totally confirm the picture as given by the media today".
Tolgfors has the supreme institutional command over FOI (the Swedish Defence Research Agency) agency which - as known in the latest news - established a fake company in order to implement the secret agreements with Saudi Arabia; The name of the company is Swedish Security Technology and Innovation, SSTI. In this way FOI thought the operation it could not be traced by the Swedish Parliament. Namely, "none of the committees of the Swedish Parliament was never informed och such operation" (statement of the Vänster Party's chairman in the SvT evening news 6 March). 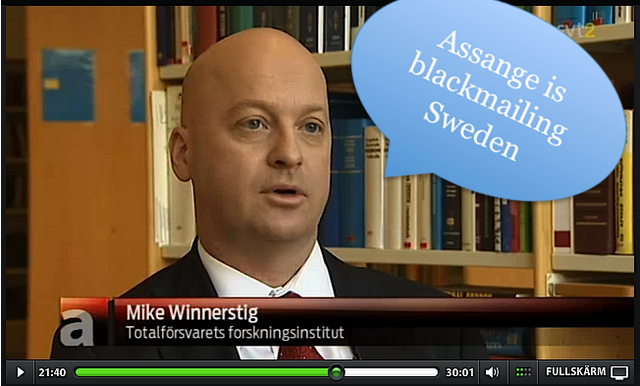 During a recent radio debate in which Professors blogg was invited to meet Expressen's editor-in-chief's opinions (Radio1, aired 3 March 2012) on WikiLeaks, Mr Thomas Mattsson dismissed any explanation pointing to a coordinated media campaign as nonsense. During the acid polemic which have ensued between WikiLeals and Expressen, the tabloid has been signalled as a megaphone of the Moderate Party - or going "hand-in-hand" -  as Julian Assange recently indicated.
The Swedish military collaboration with the Saudi Arabia dictatorship commenced under the previous social democratic government of the pro-Bush PM Göran Persson and his Justice Minister Thomas Bodström -- the main partner in the firm Bordström & Borgström which instigated the reopening of a process against the WikiLeaks founder.


According to TV4 News 6 March (19.00) The chairman of such Constitutional Committee has already declared that the above it will not be considered in any case before year 2013. This because their agenda is fully booked for this year! 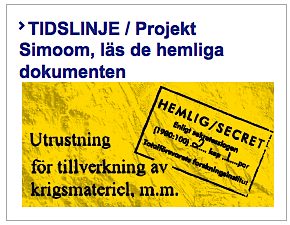 Posted by Marcello Ferrada de Noli (Italy) at 12:01 am

very important post: finally we begin to see a little light in the country that was the country of Olof Palme.
thanks Professor! Grazie Professore.