Foreign Affairs Minister Patiño on the accusations in Sweden against Julian Assange: “Personally, I think this is hilarious”. Professors blog has said it all along from the beginning: This is a political case, not other. 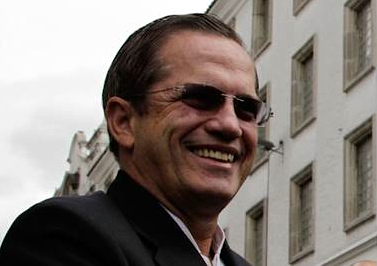 All Swedish mainstream media is publishing the above quoted expressions that Ricardo Patiño Aroca declared to AFP, and referred in Sweden in a cable by TT.
Aftonbladet, in the sad article “Det är dråpligt” (5th of July - the title is the translation of “It is hilarious”) tries to counter Patiño’s assertion by simply throwing some misleading characterizations of Julian Assange – however avoiding to comment the “condom evidence” or other flawed procedures hinted in the AFP/TT report. Aftonbladet says for instance that the “crimes-suspect" Julian Assange “fled” to the Ecuadorian Embassy.  The article refers also the WikiLeaks "duo" Jennifer Robinson and Kristinn Hrafnsson, giving some impression as if "Bonnie and Clyde" were in a tour.

When describing circumstances or reasons for Assange seeking asylum, the Swedish media acts without any regard to décor or decency: while they almost invariably refer Assange as “escaping” of “fleeing” to the Ecuador embassy, in the same articles they would instead often refer the celebre case of Jozsef Mindszenty in the terms of "Mindszenty asked for asylum” (sökte asyl) or “taken protection” (tagit skydd) at the U.S. embassy in Budapest . . .
On the other hand, the tabloid was among the very few media referring the Almedalen conference with the main participation of "spokesperson Kristinn Hrafnsson and lawyer Jennifer Robinson", and the only one - to the best of my knowledge - announcing their press conference.  Following, Aftonbladet asked the “objective” opinion of Claes Borgström, of the law firm Bodström & Borgström that represent the nominal accusers of Assange in Sweden.


But to call Bodström & Borgström a "political" firm would be also accurate:
Claes Borgström has been during long time official spokesman for gender issues of the social democratic party and also the government-appointed gender-equality Ombudsman. Thomas Bordström is a former minister of Justice under the Bush-docile government of Göran Persson, and that become particularly known after the exposures of collaborating in the secret prisoner-renditions to the CIA. It was about immigrants held in Sweden and referred by the U.S. of being terrorists, for which Sweden secretly facilitated the transport of the prisoners from Sweden to elsewhere, where they were brutally tortured. WikiLeaks cables have denounced numerous episodes of marionette collaboration from the part of Sweden’s Ministry of Justice.
Further, there is a fact the Swedish press – to the best of my knowledge - has never mentioned in reference to the Sweden’s by proxy political case against Assange: Thomas Bodström is a top politician among the social democratic “Brotherhood movement” (Bröderskapsrörelsen), an internal structure within Sweden’s social democratic party formed by a group of   Christian “fundamentalists”. This organization was the one inviting Julian Assange for lecturing in Uppsala. In addition, the political secretary of the said organization “Brotherhood movement” is, according to their Wikipedia article, the same woman that appears as one nominal accuser of Assange --and of course legally represented by Bodström & Borgström.
Claes Borgström have acknowledged in a Guardian article [1] being the instigator of the reopening of the case against Assange after it ha s been dismissed by the first Chef Prosecutor. Whereas Thomas Bodström – as previously reported in Professors blog – has taken pride in acknowledging the accountability of Bordström & Borgström as a whole in representing the plaintiffs against Assange (said by Bordström’s own words in his blog “Bodström’s society” as I have referred in Newsmill. [2]
Aftonbladet, an ideological right-wing tabloid posing from time to time as sympathetic to social-democratic top politicians, has given in the past ample coverage to Bodström & Borgström. For instance when Thomas Bodström defended the plaintiff in a case against political refugee Tito Beltrán (also an international celebrity - a famous opera tenor) and easily managed to get a conviction from the politically appointed judges in spite no evidence was presented against Beltrán. Aftonbladet reported triumphalist on the Court verdict. The verdict stated:

"According to this court, we found the plaintiff's story credible and that fully meets the requirements to form the basis for a conviction".


The "evidence" mentioned later in the verdict against Beltrán referred to declarations of two friends of the plaintiff which would "have heard" an account from the part of the plaintiff after the alleged happenings. Also in this case, it was not the plaintiff who have made a complaint to the police against Beltrán. It was another woman (Monica Dahlström-Lannes, known in Sweden as activist and campaigner  concerning sexual-offence cases) who after her own private investigations and interviews on the case filed the complaint to the police - nine years after!
Dahlström-Lannes was a board-member of the same organization, ECPAC, in which  the social democratic politician and former minister of Justice Thomas Bodström was also a board-member. However, Bodström denied in the court hearings that he knew Dahlström-Lannes.
The above background might explain why Aftonbladet is asking Borgström to provide Swedsh readers with an “objective” opinion in facing international criticism of their flawed legal system. This were the arguments, or absence of arguments, put forward by Borgström in “debating” Minister Patiño’s assertive opinions:
– “I become very, very much upset. Most of all, on behalf of these two women (the accusers). It has been very strange comments under the years that passed, but this breaks all the records. He (Patiño) does not know anything about the facts-on-debate, he says” [3]
And Borgström continues,
– “He is a minister in a government, he must think what he says. I just regret that Ecuador has a foreign minister that is considered as a clown”
That said by this Swedish lawyer recently filed upon the Bar Association for alleged infringement on the ethic codex – for implying in declarations published by Aftonbladet that Assange was practically a convict.

Posted by Marcello Ferrada de Noli (Italy) at 12:15 am

And the place in Gotland is called Almedalen.

Thanks for your interesting blog, it's needed for sure.

I thank you kindly