By Marcello Ferrada-Noli
“Evidence of PTSD occasioned by rape (or RTS) is not a scientifically reliable means of proving that a rape occurred. PTSD is simply a diagnostic category created by psychiatrists, it is a human construct, an artificial classification of certain behavioural patterns . . . It was not developed or devised as a tool for ferreting out the truth in cases where it is hotly disputed whether the rape occurred” (US Court statement in Spencer v. General Electric Co. 1988, at 1075) [21]
Part I    Pseudo-Science in Swedish Rape Trials. With an Introduction on the Origins of State-Feminism in Sweden
Part III A forensic scenario in the Swedish case against Assange
Part II
In this second part of the series Pseudo-Science in Swedish Rape Trials [22] I further introduce the inquiry into the scientific value of PTSD-diagnosis (posttraumatic stress disorder) at the Swedish courts, concretely as been issued by the "Emergency Clinic for Raped Women in Stockholm" (Akutmottagning för våltagna kvinnor - AVK, Söder sjukhuset) [23]. The analysis as such (to be publish in PART III) is made in the context of potential developments in the Assange case in Sweden. Several sources have elaborated on the eventuality that one woman-accuser of Julian Assange would have been “interviewed” at the said Stockholm rape-clinic for the purpose of documenting and certificate-issuing. The assumption derives from the fact  - as informed in the main Swedish newspaper Dagens Nyheter on July the 7th 2011 - the AVK clinic have issued forensic expert-statements (rättsintyg) at rape trials in "most of the rape cases in the Stockholm area" [24]. Secondly, the documentation and certificate-issuing done by the AVK includes areas of expertise far away gynaecology. They even issue psychiatric diagnoses!
The powerful role of this clinic in the course of Swedish rape trials can be measured by the huge number of expert statements the clinic issues every year to the courts, and which correspond to nearly 50 per cent of all cases processed by the clinic (265 out of 579 new cases in 2010) [24]. The Stockholm Clinic for Raped Women (AVK) started activities year 2005. After that very same year of 2005 the convictions for rape in Sweden increased from an average of 103 per year (period 1975-1980) to 220 per year [25]. The institution of the clinic has clear correspondence with the new Swedish legislation (2005) that widened the rape-concept.
Indeed, the Swedish politicians’ original initiative regarding the establishment of the AVK aimed to provide unbiased medical assistance and psychosocial support to women that have been victimized amid the horrors of rape and physical abuse. It was - and still it should be - a noble, progressive and needed enterprise. However, the hospital facility AVK has become notorious in the Swedish public instead for the following items: 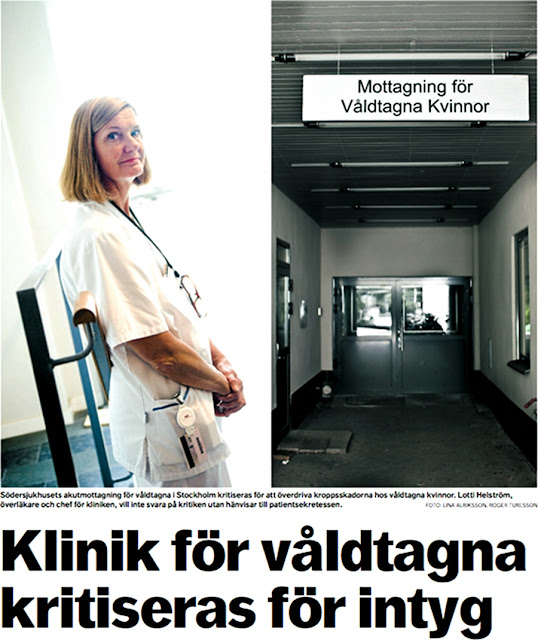 Further, Dr. Helström’s excursions in the field of public health and psychiatric epidemiology – while talking to the media or through other means in addressing the Swedish public or colleagues – have been various, erroneous and dangerously misleading. For instance, I will here comment her inaccurate statistical presentations on “violence of men against women” [27], in psychiatric populations [28] or her picture on the epidemiology of traumatic resulting in PTSD [29].


This is the the advice doctors should give give to the immigrant brides, according to the cited program authored by Karolinska Institute’s Assoc. professor Lotti Helström:

"Blood on the sheet can be achieved in different ways. Most effective is that she immediately after intercourse goes to the bathroom and stick herself in the inner labia. The stinging must be practiced at home in advance so that she should know how hard she must puncture and how much it hurts. (For) Which is worse: to be murdered or to puncture oneself? Hide the needle in the toilet bag, or in the wedding gown (pretending) it was left behind by the seamstress. In case of emergency use a safety-pin that can be hidden in the vagina or rectum.”

According to the article's author Ewa Ture, the counseling is contained in the Program ""Care-managment of women with virginity problem" (Omhändertagande av kvinnor med oskuldsproblematik) published 2004 by the SEASM unit at the Karolinska University Hospital.

The exact quote from the information included in the DN's article:

Continues. . . in Part III
Notes and References
21. The full text of the quote is:
“Evidence of PTSD occasioned by rape (or RTS) is not a scientifically reliable means of proving that a rape occurred. PTSD is simply a diagnostic category created by psychiatrists, it is a human construct, an artificial classification of certain behavioural patterns. RTS was developed by rape counsellors as a therapeutic tool to help identify, predict, and treat emotional problems experienced by the counselor’sclients or patients. It was not developed or devised as a tool for ferreting out the truth in cases where it is hotly disputed whether the rape occurred” quote found in “page 42 Restrospective assessemnts of mental states in litigation.” Robert Simon & Daniel Shuman

22. M. Ferrada-Noli. Pseudo-Science in Swedish Rape Trials. With an Introduction on the Origins of State-Feminism in Sweden. The Professors blog, 29 July 2011