A major update to this post has been published 1st November 2011 in "THIS IS WHY" ("why Sweden is so revengeful against Julian Assange?") 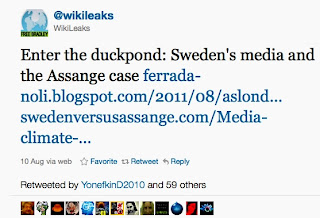 Karin Wasteson is a Swedish journalist based in London.  She took contact with me recently while working with an article on the Swedish media reporting of the Assange case, for which she had interviewed several sources.
These were her written questions, followed by my answers, in which I insert here some links for the readers of the Professors blog.

1. Why do you think there has been an overall negative reporting of the case by Swedish media?
There are two main reasons that might explain the negative reporting of the Assange case in Sweden, one is of a political nature and the other has to do with traditions of Swedish journalism.
A. The political aspects
In its turn, the political aspects determining or influencing the reporting appear being twofold:
On the one hand we have the change in the foreign policy and military-strategy main perspective of the Swedish government, namely, abandon of the neutrality-stand and identification with NATO and the geopolitical interests this organization represents. In this line, the government would demonstrate - as they have done in the Afghanistan and Libyan cases - that Sweden is a “loyal partner” and long away from the late Olof Palme’s policy of alignment with the Third World countries.
It is worth to note that changes in those regards started already by the times of the former social democratic government of Göran Persson. This can be illustrated with secret agreements on cooperation with USA services which otherwise had became known through the rendition-flight episodes (political refuges in Sweden handed over in secret to the American services to be transported to interrogation centres elsewhere, as in the case of the Egyptians refugees). During these events, exposed to the pubic by a documentary in the private network TV4 (update: episode also commented in an editorial by DN 12/8 2011), the social democratic politician and former minister of Justice Thomas Bordström was signalled a main actor in the operation. Eventually an investigation on his role was held upon the Swedish Constitutional Committee – with no further consequences, useless to add. 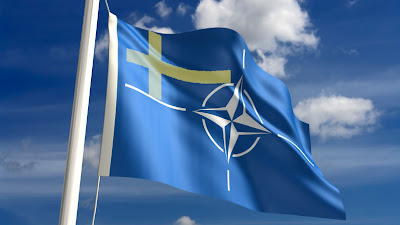 Sweden's acting in the apprehension of a USA’s number-one enemy - as Julian Assange is characterized - might be a confirmation of the above.

For these ends, the government have naturally got the support of all the political parties favouring the NATO approach, including the “opposition” (mainly the social democratic party).

Although is natural and legitimate that a Swedish government - as the USA or any other sovereign country - decides the foreign policy they think it best would serve their national interests, the problem here is of another kind. It has to do with important decisions that have been adopted in secret by government officials and hidden to the Swedish Parliament and the public. It is about the transparency issue.

Yet another issue is whether that "double play" from the part of the Swedish government is really necessary in the interest of Sweden's foreign policy (DN-debatt 10/12 2009).
On the other hand, the government has also got the support of the leftist parties and organizations in their case against Assange. This through highlight the “pro-feminist” aspects of the case, all which has served as a symbol for the radical feminism in Sweden in their campaign for moving forwards an even more advanced legislation in the gender-perspective. Assange is presented as the ultimate male-in-power-perpetrator and sexual abuser of Swedish women-victims, a construction that would mirror the “patriarchal” structures of the power constellation in Sweden and elsewhere, according to the radical feminists.
It is worth to mention that the Assange accusers, and notably members of the prosecution and police apparatus that have actively pursued or dealt with the Assange case are members of the same radical-feminist organizations or share their ideology.
In sum, the Swedish crusade against the WikiLeaks founder Julian Assange has shown being compact and having the characteristic of a national cause.
The above have generated a strong populism-factor around the case, and hence also a profitable source for other political or cultural opportunists in the Swedish forum, in the blogosphere and others authors not previously known as embracing political correct positions. The critical voices on the Assange case in Sweden have became fewer, and had to pay a high price for their objective and ethical stand.
B.  The Swedish journalist traditions 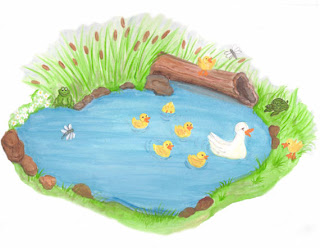 As I have previously developed in Newsmill, the “duck-pond” phenomenon in the Swedish journalism consists partly (there are yet other principal factors explained in the article, such as hegemonic nationalistic ideology or media monopoly) in that Swedish journalists, generally referred, do not exercise critical analysis of the wrongdoings of corporate power or government, particularly in cases of “national emergencies”. In these cases, their role has basically been to repeat communiqués released by the authorities. International correspondents have previously observed this phenomenon during past “national crisis” or where the Swedish “prestige” has been in focus, such as the riots of Gothenburg or the alleged Soviet submarine-incursions in Swedish waters.
2. Do you think it has altered the judiciary process of the case in Sweden and Britain?
Yes, indeed.
3. Have you analysed British and foreign media as well?
I have not conducted such analyses myself, but others have done that, for instance regarding the biased reporting of the Guardian. Guardian had to recognize in a given moment it had censorship against references to articles published in Professors blog on the case Assange. These have been articles also authored by Naomi Wolf or Andrew Craig, not only those of my own.
4. Are you disappointed by the biased Swedish press, or was this to be expected?
I would have expected some repetition of the cultural and political nationalistic phenomena mentioned above, but not to the solid extend in which this have now shown in the Swedish case against Assange.  For reasons I have otherwise a high identification with Swedish societal and cultural values, of course I feel disappointed, as very many other academics around the world regarding the Swedish managing of this case. And the attacks of the media have been such biased and also at times detrimental not only through vulgar personal attacks to Julian Assange but also to the few that have dared to criticize the main stream in the reporting of the case.
5. Do you think Assange can expect a fair trial in Sweden if he is extradited?
No, sadly. Both the PM and high officials in the juridical system have already profiled the case with their public declarations. Yet, the main reasons behind are partly the national or strategic interests in play – as explained introductorily – and partly the trial by the media, which have been exercised against Assange in Sweden. Further, as it has been demonstrated in the juridical tradition of Sweden, women accusing men can get along with hard sentences against the men even without the need of presenting evidence, as it is in most of the western countries. One of these cases was the sentence to prison against the Chilean political refugee Tito Beltran [1] – also a worldwide celebrity as opera tenor - accused of rape on the basis of a Swedish woman's declaration made nine years after the episode in reference. No evidence was needed. The lawyer of the woman-accuser who obtained the sentence was the social democratic politician and former minister of Justice Thomas Bordström, mentioned above. This politician is the partner of the law-firm Bordström & Borgström that nominally pursue the case against Julian Assange.
And above all, because it has became a matter of prestige. This, I would say, is a sacred item in Sweden.

Svenska dagbladet, a main Swedish newspaper, illustrated its 17 Feb 2011  article “Idyllic picture of Sweden is darkened” with a montage showing the notorious criminal Göran Lindberg -- a world-reviled, convicted serial rapist (including the rape of a 14-year old child) – portrayed together with Julian Assange and his lawyer Mark Stephens. A conspicuous columnist of the newspaper Aftonbladet refers 13 Feb 2011 to Julian Assange as “a paranoid idiot who refuses come to Sweden to confront trial”.  The competitor newspaper, Expressen, describes 13 Feb 2011 in its cultural page “the sexual pleasure of Mr Assange is just an inescapable element for his severe compulsive needs that are beyond. . .” (text from Does Sweden Inflict Trial by Media against Assange?)
Notes

[1] The verdict stated: "According to this court, we found the plaintiff's story credible and that fully meets the requirements to form the basis for a conviction"-
The lawyer defending the plaintiff was the social democratic politician and former minister of Justice Thomas Bordström. The "evidence" mentioned later in the verdict against Beltrán referred to declarations of two friends of the plaintiff which would "have heard" an account from the part of the plaintiff after the alleged happenings. Also in this case, it was not the plaintiff who have made a complaint to the police against Beltrán. It was another woman (Monica Dahlström-Lannes, known in Sweden as activist and campaigner  concerning sexual-offence cases) who after her own private investigations and interviews on the case filed the complaint to the police - nine years after!

Dahlström-Lannes was a board-member of the same organization, ECPAC, in which  the social democratic politician and former minister of Justice Thomas Bordström was also a board-member. However, Bordström denied in the court hearings that he knew Dahlström-Lannes.
_______________________
At a later stage, journalist Karin Wasteson send to me the draft of her text in which she had summarized my statements. The text here below, added a minor update:
"Professor Marcello Ferrada-Noli provided a witness statement to the first court hearing. He has conducted an independent study of the media coverage of the Assange case and analysed all articles in Swedish from 11 January to 11 February 2011. According to his study, 56 per cent of the articles contained negative reporting. 38 per cent was about Julian Assange as a person.

He says: “In Sweden journalists follow a tradition of not questioning official policies, particularly on foreign-affairs issues. The mainstream media side with the government without being critical. As a results, most journalist-reporting in Sweden on those issues appear just politically correct or very naïve.”

Ferrada-Noli says: “Journalism is supposed to be a critical source of information of what the government is doing. It is supposed to observe, criticize and scrutinize power. This has not been done in this case because a constellation of political factors”, he says.  His thesis being that the Swedish case against Assange is politically motivated and has primarily to do with Sweden’s new alignment in the geopolitical scenario and he Swedish main-stream media is constrained because of ownership interests. Another political factor influencing the media reporting of the case, he says, is that “it has being used by the radical feminist movement flagging a further legislation on rape.”

He continues: “It's a Kamikaze attitude, and this is only hurting Sweden in the end. What happened with Assange was that the eyes of the world was turned to Sweden and everyone saw the flaws of the legal process regarding rape in this country.”
Other articles on the affair Assange in the Professors blogg
Wikileaks, J Assange, Assange,intressant, feminism
media, journalists
Posted by Marcello Ferrada de Noli (Italy) at 3:44 pm

Sadly, I don't think Julian Assange has a chance against the powerful forces mounted against him.

Hi! I've just read the article. I think is quite judicious, thoroughly written, and the "duck-pond" metaphor was especially smart! Good luck