CIA connections of Swedish "radical feminists" in the Assange-plot?

Is there a CIA connection in the Swedish Assange-plot?

Breaking news from the Italian News Agency RAI News-24 and the Cuban Prensa Latina - and that, needles to say, will not be accounted by the Swedish media - provide now extensive details on the reported CIA connection of a "Cuban woman" of name "Anna Ardin", and of her activities in Cuba and Sweden. She is also signaled in those news reports as one of the two women behind the accusations against Julian Assange.  The RAI article has the headline "Anna, accusatrice di Assange, 'spia della Cia'"

It is not likely that the Swedish media will investigate or at least comment in deep on these new aggravating informations. The Swedish prosecutor Marianne Ny have already denied any foreign initiative around the case and the radical-feminist lawyer Claes Bogström, self-confess instigator of the "rape" reopening case, have declared to the journalists that is just about two normal, average Swedish women and that nothing of it has to do with the WikiLeaks thing.  Swedish journalists have accepted that uncontested, and the news reports on the Cia-connection immediately discarded as "incredible stories".

Yoama Chappottin Ford, author of the article "USA behind the Crusade Against Wikileaks" published in CubaSi (full-text linked down blow) instead states: "Behind the alleged rape charges against the founder of Wikileaks Julian Assange, appears CIA's  collaborator Anna Ardin, a Cuban woman linked to terrorist Carlos Alberto Montaner".

The fresh reports - implying the CIA with the legal actions of Sweden against Assange  - were recently published in dispatches from respectively Rome, Italy (RAI-24 News) and Havana, Cuba (Gramma, Prensa Latina) and the U.S.A. (The Miami Herald, USA). Here is reported that "WikiLeaks founder Julian Assange's accuser has ties to Cuban dissidents". The possible Cia connection of Ana ardin has been reported before (as I have previously quoted in my article Assange buried the Swedish neutrality myth  published in Second Opinion 8/12).  These new reports  are more specific, bring further details and also  include primary sources from Cuba. They are News-agency dispatches and main newspaper articles. They are not "rumors in the net", as equivocally referred in a Swedish newspaper's editorial (Sanna Rayman "Absurditetsnivå gredelin är passerad för länge sen", SvD 10/12).

Strictly, even considering that the connection of the mentioned woman and the CIA would have indeed existed - directly or indirectly (read the information attached in the links below and have your own conclusions) - still that per se would not necessarily entail that a very special operation was set in motion by the CIA in Sweden, to get Assange.

However, the reports given on this "collaboration" with CIA published by solid News agencies as RAI or ANSA are so  detailed and emphatic,  and the possible impact at the base of the case of the Swedish establishment against Assange so aggravating, that in any other Western country it would most certain lead to an investigation from the part of serious and professional journalists. But not in Sweden; and the reason being quite simple: Swedish journalists ARE parts of that establishment. Further, many among them are also adherents - with different degrees of involvement - of the political ideology of feminist fundamentalism. Its notorious front liner, lawyer Claes Borgström, is the one who actually took the initiative in labelling the  case as "rape" and then pressed the reopening of the "rape" case against Assange).


In the context above it has to be noted that a variety of conspicuous and international known names in the front line of feminism, such as Noemi Wolf, Naomi Klein ("Rape is being used in the Assange prosecution in the same way that women's freedom was used to invade Afghanistan. Wake up!") and most recently Katrin Axelsson from the European group Women Against Rape have publicly questioned the misuse and instrumentation done in the Swedish case against Assange. In the words of Axelsson in a letter to The Guardian 8 Dec 2010 "Women don't take kindly to our demand for safety being misused, while rape continues to be neglected at best or protected at worst." She mentions also that "Sweden has the highest per capita number of reported rapes in Europe and these have quadrupled in the last 20 years" while convictions have actually decreased.

Whether that small Swedish fascist clique of self professed Christian fundamentalist-feminists has or not been instrumented by CIA in their case against Assange it will for sure remain as investigation stuff, world-wide. Nevertheless, the Swedish  political-financial establishment has enough strong reasons of their own for fearing WikiLeaks, or  revenge against Assange, or wish to neutralize him (and the Swedish Pirates, copy-right abolitionists, WikiLeaks activists, independent liberals and all creative intellectuals who are beyond their control).

Hence, it would be fair to assume that this establishment in power would very eagerly pavement the judicial way for the fundamentalist-feminists in moving forward their campaign for enhancing the rape criminal-concept (Borgström and companions), using Assange.  It is here where the Assange pilot-case fits in, a case devised to have a free ride in the celebrity locomotive of the recent, highly publicized Wikileaks episodes.

In this case, the Assange accusations would not need such a thing as “perfidy-minded” CIA inventiveness. Christian fundamentalist-feminists have a deceit manual of their own. In other words, Sweden is doing such an excellent job in the smearing-campaign against WikiLeaks and Assange that, in my opinion, CIA would think there is  no need at this stage for giving the Swedes an extra hand.

The only crystal clear thing in this affair is that the interests of USA (with or without CIA involvement), the interests of  the Swedish political establishment menaced and already hurt by Wikileaks, and the agenda of the Swedish fundamentalist-feminists, indeed converge perfectly in this nasty campaign pursuing the political killing, or just the killing,  of Assange.


Find the links to the mentioned articles, in full text, here below the RAI- clip 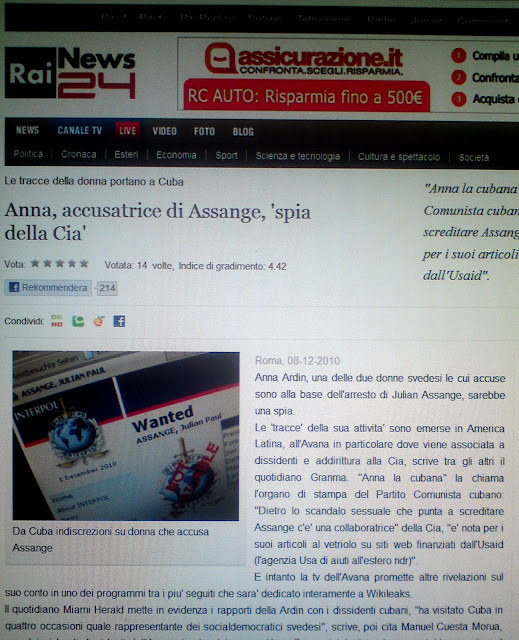 A GRANMA article (Spanish) published yesterday an article authored by the French-Canadian Jean Guy Allard and which is reproduced in full text in this site: http://radiomambi710.univision.com/noticias/article/2010-12-07/granma-montaner-vinculado-a-wikikleaks?refPath=/noticias/mundo/noticias/