Carl Bildt should be criticized because of his pro-NATO stand, for advocating the military intervention in Afghanistan, for had neglected, and then in fact contributed to discard, the foreign policy of Swedish neutrality and non-alignment. But not because he happened to communicate to his public - before Reindfeldt - that a terrorist act had been essayed in Stockholm.
Needles is to say that, being positioned deeply faraway towards the left-liberal bitter end, and being a warm supporter of an immediately pull-out of Swedish troops from Afhganistan, and of a neutral Sweden, I am not at all adherent of Carl Bildt's political stands. I feel however obliged in contributing to set some record straight in condemning some media-procedures I dislike, independent of their target's political colour.

Photo SvD - Scanpix
First we are informed by the Swedish media – around the Wikileaks disclosures - that among USA rulers it would exist consensus in estimating Carl Bildt as a political profile hard to deal with. Reasons? When it comes to international political doings he is for instance considered “too independent”. Another “wrong” thing with him is that he ostensibly favored dialogue instead of direct military intervention and somehow opposed initiatives of isolating Iran. “On top of everything” Bildt is criticized for having “such extensive network” among the decision-makers community, internationally that is.
Any individual with a normal political common sense, and independent of being left-wing or right-wing or whatever wing, would indeed consider those “wrong” features ascribed to the politicians of their choice as valuable ones. But apparently not in Sweden. And this is not explained solely on the base of the Swedish “jämte-lagen”.
Obviously, Carl Bildt does not everything what USA expects  him to do, he perhaps has “a Swedish agenda” it is said, or a “Bildt agenda”, in dealing with conflicts or volatile situations for instance in the Middle East or in the Arab scenario specifically.  So?
The Swedish public has been educated by the establishment’s media – or alienated, it would be a more proper concept – all along during the post-Palme era to accept and repeat, and go after uncritically, nearly everything coming from America. In politics, in culture, in fashion, in innovative health-enterprises (including fake diagnoses as “burn-out”, copycat utbrändhet). Not to mention political values and international stands. From time to time the media revives some painful and quasi-innocuous debates on the “Swedish culture”.  The conclusions are invariable. It is not possible any longer to characterize, in the main, a “Swedish” culture as such.
The situation of ideological-cultural dependency has reached such extremes, that the Swedish media and blogosphere, for the absolutely most part right-wing, are ready to pick on and criticize any one criticized by America’s right-wing, without reflecting about the true national interests of their own, or the reality behind the scenario.
To this can be argued by right-wingers that there is not such a thing as divergent or opposed interests between USA and Sweden, or specifically between Swedish and American right-wingers. But form the Nation's perspective surely there are - objectively - unique interests which collide with the interests of USA or other foreign powers. 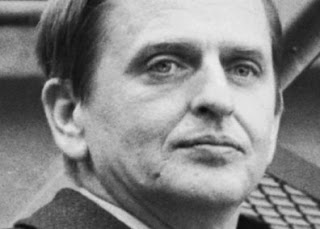 Further I believe, that Bildt have figured out (from his conservative perspective), as Palme strongly believed (from his socialist-liberal perspective), that beyond contingent peace-keepings scenarios there is a mankind-interest in the construction of  lasting worldwide inter-national understanding beyond the "easy" militarily achieved and short lived peace-treaties, armistices and so on. I base my assumption in Bildt’s diplomatic intervention during and in the aftermath of the Balkan wars.
No one - either from the left or the right wings - have said publicly that perhaps Sweden has not been target of terrorists actions before December 11 because of the relative good stand Sweden was enjoying in the diplomatic arena  of Third World and in the conflicting areas in which Sweden is not directly participating  as hostile factor. In other words the believe  that Sweden was some how still neutral "by heart and tradition" and trying to solve conflicts politically.

And instead of picking on Bildt for bagatelles, what about to recognize that  perhaps things would have been even worse without Sweden's “independent” voice trying to get some political agreement instead of further deep military interventions. Or at least "pretending" a Swedish neutral or pro-pacific stand.

It might be so, unfortunatelly, that the recent Wikileaks disclosures  have  definetely push down the balance to the wrong end. The world can not any longer ignore the true and deep colaboration of Sweden towards USA neo-imperialistic  military doings. In this regard, there is very little room for doubt concerning the motivation for possible hostile activities or even terrorist raids against Sweden. The  bomber in central Stockholm of December 11 put it very clear by his own message (assuming  it was his). Ergo,  the trigger factors in the recent Stockholm bombings were – as manifestly stated by the perpetrator – a) the military presence of Sweden in Afghanistan and b) the help that Vilks has got all along by the establishment’s media to insult and humiliate Moslems sacred icons. Sill the panorama could have been  far more devastating, and the acts of terror against Sweden of a much earlier debut.
In the last developments around the pro-America / anti-Bildt paradox, everybody in Sweden seems infuriated because Carl Bildt would have said from very early that a certain terrorist act was essayed in Stockholm, Saturday 11/12. To criticize this is simply ridiculous. In the first place what he stated it was true, in the second place the foreign public is expecting just the foreign minister of the target country to quickly explain what is behind the breaking news.
In the third place, Carl Bildt's saying-the-truth-as-it-was contrasts with the extraordinary play put up by nearly all the Swedish top establishment during that day of December 11 , as well as government officials and National Security people, with the exception of Anders Thornborg (head of Security Dept at SÄPO). See my comments in Afghanistan, Lars Vilks, bomb, Sweden .

In the context, Carl Bildt should be criticized because of his pro-NATO stand, for advocating the military intervention in Afghanistan, for had neglected, and then in fact discarded, the foreign policy of Swedish neutrality and non-alignment. But not because he happened to communicate to his Twetter public - before Reindfeldt - that terrorist act had been committed in Stockholm.

Further, those obsessed with "petitteser", should in the first place criticize Prime Minister Reindfelt because he waited an incomprehensible  time before to address his nation on the same issue.