The following facts, easy verifiable, are a formidable and pristine-clear illustration of double behaviour from the part of the Swedish ruling establishment towards its Swedish citizens. It is also about the information VS. desinformation war.

The International TV broadcastings of Sunday 12/12 shown invariably the Swedish Intelligence (SÄPO) Security Head Anders Thornborg, manifesting directly and in clear English during a press conference that the explosions in Stockholm were done by a person “because” of his disapproval of the military commitments of Sweden in Afghanistan and the affair Vilks-caricatures. He was telling the simple truth and this truth was broadcasted – simply and deprived o euphemisms – to the international public. 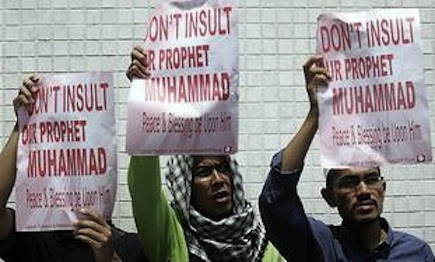 In astonishing contrast, the domestic, nation-wide TV broadcastings, exhibited invariably this remarkably  attitude (evening of the 12/12 2010):
In every occasion that the anchors or programe-host asked on the possible causes or motives of the bombing (news-programs Aktuell, Rapport, and the in-deph news program Agenda, of the Swedish National television, SVT) to politicians representing the government, or from the opposition, or “terrorism experts”, or political commentators from the main establishment’s newspapers, (Dagens Nyheter and Aftonbladet), invariably no one of those asked alluded in their answer either the Swedish presence in Afghanistan or the Wilks offensive-caricatures episode.
Further, SVT journalist Marianne Rundström - program leader in “Agenda” - gets the most incredible eluding answers, as if the interviewers are playing “dumb” or plainly do not understand the direct question, or simply they conceal a truth they perfectly know.

In one occasion the program-leader in Agenda asked Anders Danielsson, head of the Intellince Agency (national security police) a question with unequivocal direct meaning, that he could not have missed:
Direct question fom SVT-Agenda:
Is there anything that you could think it could have triggered the bombing-act  (kan du se någonting som kan vara utläsande?).
Answer:
“This is horrible. One cannot understand that the all thing has happened” (Detta är förskräckligt. Man kan inte förstå att detta har hänt). And then some words in absolute general terms like “what would happen happens”, etc., but not a word on the recent public revelations about Swedish involvements in the war against Iraq, the recent disclosures on the Afghanistan war and the deep collaboration between USA and Sweden, etc.

In another occasion during the SVT program Agenda 12/12 the program leader asked directly Karin Pettersson (Aftonbladet's editor in chief) whether the Afghan issue could have a relevancy or connection to the commented bombing. The eluding answer came directly. Karin Pettersson replied in essence  that “Sweden’s role in the Afghan war is a thing for the Sweden’s democratic institution to decide, and the discussion not be influenced in this or that direction by acts of this kind or as a response to those”. This is absolutely not what the journalist is asking her.  She also said that Aftonbladet have been critic to that involvment and she also mention the note send by the terrorsit/bomber but NOT relating this fact as the clear-cut motive in her interpretation (or abscence of interpretation).
Nevertheless, the world would say, jokingly, "that is Sweden in a nutshell, to play  not understanding" (“hacerse el sueco”, to play the Swede, as the saying here abroad). But the issues at stake are far much serious to record the above only as another anecdotic entry.
The all thing in trying to “guess” or “investigate” “wait until is clear” about the motivations of this particular terrorist is tragically ridiculous. Everybody abroad (here, for instance Italy) knows already - as independently from the government informed in Sweden - that the terrorist himself had send a note explaining (in English and Swedish, in written text and in an audio-file!) his clear-cut motives:
a) the military intervention of Sweden in Afghanistan, b) the affair Vilks
The facts and rationale that Sweden – and even SÄPO officials - admit for the public abroad,  why trying to consequently deny to their own Swedish public?
1.      Because that would immediately trigger an anew discussion not only of the Swedish political and military involvement in Afghanistan. In the aftermath of the Wikileaks disclosures on the secret agreements Sweden-USA, a new debate will certainly review the issue on the degree of dependency the Swedish foreign policy have secretly incurred towards USA interests.
2.      Because a discussion anew on the affair Vilks would put in evidence that the position of the Swedish establishment towards freedom of expression and publishing is ideologically conditioned. It will depend if serves or not the primary interests the establishment is due to serve, domestically and internationally.
In the case of bringing help to Lars Wilks in his vulgar provocative anti-Islam discourse all the doors of freedom of expressions were open and encouraged in Sweden. In the case of trying to neutralize denounces against Sweden's secret agreements with USA disclosed by Julian Assage's Wikileaks, and its participation in the Afghanistan dirty war, doors will be closed, accusations in-personae will be fabricated, and “freedom of expression” put in jeopardy without a blink of hesitation.

Honesty is not valued in Sweden! Lying is no shame here. Its the norm for swedish media, and of course politicians! Simple as that!

But when lies are the norm, everything disintegrates! Its the road to selfdestruction!

Not even the media are honest, and theyre supposed to scrutinize the politicians!

The swedish society really is rotten to the core when it comes to the truth!

So everybody threatening our democracy should be dealt with very decisevely and harschly! Thats not done! we have a very weak prime minister (Reinfeldt) och the rest of the society follow suit.

These threats is a stake in our heart, so our government is letting us down! Sweden has no tradition of fighting for democracy. We bent for the nazis during WW2 and we´re bending for the islamists today!