Ministers Carl Bildt and Tobias Billström in Bagdad - WikiLeaks cables disclosed that the Swedish government is using phony "honour-killings epidemics" as reason for mass-deportation of refugees. Amnesty, UNHCR and EU Human-Rights Court concerned about the deportations

To Sweden's shameful historical record of secret mass-deportations - thousand of Russians, Finnish and Baltic refugees condemned to perish in the Gulag after Sweden’s agreement with Stalin - the Bildt & Reinfeldt regime adds the mass-deportations of Iraqi refugees in Sweden after an agreement signed with the Iraqi regime - a country under a military occupation supported by Sweden. In Baghdad, Foreign Minister Carl Bildt announced "honour-killings" and "public opinion" as reason for stopping the refugees and to which  repatriations – including forced deportation - ensued. However, honour-killings as "epidemics" have never existed in Sweden. In fact, Muslims are statistically significantly underrepresented in cases of family-related violence with women resulting in a fatal outcome in Sweden. Amnesty, United Nations UNHCR and EU Court of Human Rights (see interview down below) have reacted against the Swedish mass-deportation of Iraqi political refugees. The real, secret position of the Swedish government on Muslim migration issues is actually no different than that of Sweden democrats. 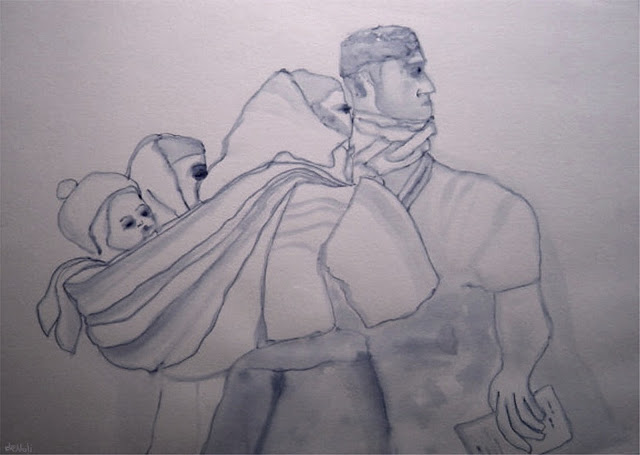 Ferrada de Noli, ''The Rejection - Refugees at the border checkpoint''. 2004

“The recent leaked documents by WikiLeaks continue being problematic both for Sweden and U.S.” Tv4 Journalist Andres Pihlblad
I

The active participation of "neutral" Sweden in the occupation war of Iraq on behalf of the U.S. forces is well known. The Swedish Bofors the solid and the uncritical support provided to the U.S. propaganda operation in Europe by Sweden's State-owned broadcasting media and MSM on the fabrication arguments justifying the occupation of Iraq (Busch's falsified "weapons of mass-destruction" argument); etc., etc. Nevertheless a war resulting in 109,032 Iraq deaths, including 66,081 civilians, according to the Iraq War Logs by WikiLeaks. Sweden also received thousands of Iraqi refugees on the basis they proved being at risk for politically hostile behaviour to or persecuted by Saddam Hussein regime during and after the Gulf War.

This illustration would summ up the above: On the 12th of May 1996, U.S. Foreign Minister Madeleine Albright, while advocating for the economic blockade against Iraq previously decided by the UN, got a question in the program 60 Minutes where Lesley Stahl asked her "We have heard that half a million children have died. I mean, that's more children than died in Hiroshima. And, you know, is the price worth it?" Albright replied, "We think the price is worth it.” Sweden had warmly supported the sanctions against Iraq, and against this backdrop, Al Burke ("From Neutrality to NATO") refers the following as said by Albright’s Swedish counterpart, Foreign minister Anna Lindh:
“The people of Iraq are not suffering from the sanctions,” asserts Lindh. “They are suffering from a political elite that is benefiting itself.” She blames the widespread “misunderstanding” of the situation on “critics of the United States in Sweden and other countries”, quotes Burke's document. [1]
More recently, in the design of making the monarchy of Sweden a “super power” in the international arena ("stor makt", disclosed 27 February 2012 by SvT using WikiLeaks sources, the Global Intelligence Files),  Minister of Foreign Affairs Carl Bildt announced around 2007 Sweden’s plans to open anew an embassy in Baghdad.

At the time, many Iraqis had fled the military occupied Iraq for political asylum in Sweden -- but once they could managed their way to Sweden, many of them found their request for asylum turn down by the Swedish pro U.S. authorities. They were the "wrong" Iraqi refugees, not those fleeing Saddam Hussein. To get rid of these refugees, Bildt put forward the following ultimatum to Iraq Foreign Minister Hoshyar Zebariin during the "diplomatic negotiations": as a condition for Sweden re-opening of the embassy in Baghdad, the Iraqi government should sign a "repatriation agreement" stating that Iraq would be handling the Iraqi refugees deported back from Sweden -- including those under "forced deportation" (repatriation under captivity, and against the will of the political refugee in question). This is disclosed in the WikiLeaks cable:

C O N F I D E N T I A L STOCKHOLM 000136 SIPDIS E.O. 12958: DECL: 02/20/2018, “Following the signing of a repatriation agreement with Iraq, Sweden has agreed to open an Embassy in Baghdad. . . .On February 18, 2008, Sweden signed an agreement with Iraq to improve coordination and cooperation in facilitating the return of Iraqis living in Sweden. Iraqi Foreign Minister Hoshyar Zebari and Swedish Ambassador Niclas Trouve (resident in Jordan) signed the accord which calls for Iraq to welcome back Iraqis whose asylum applications have been rejected in Sweden. Sweden still planned to send most Iraqis back on a voluntary basis, but the agreement does allow for Stockholm to deport Iraqis against their will.

Sweden and the pro U.S. authorities in the military occupied Iraq - after a time of hard negotiations and pressures from Sweden finally signed the repatriation/deportation agreement in Baghdad.  According to a cable, Iraqi Foreign Minister Hoshyar Zebari and the Swedish Ambassador Niclas Trouve (resident in Jordan) signed the agreement. [2] 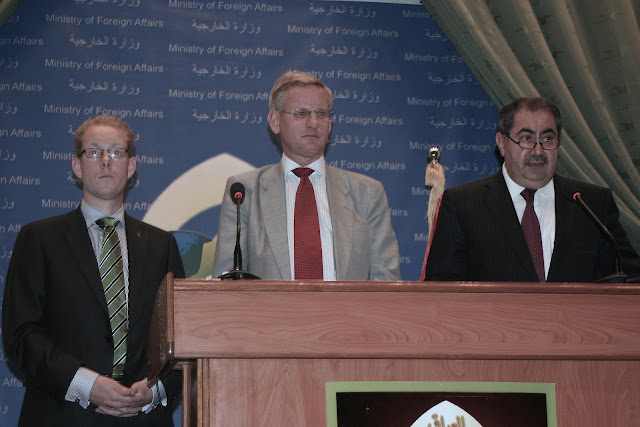 The very first deportations affected 400 refugees, but according to a SvD report (“Sweden signed agreement on Iraqi refugees”) the figure could rise to 11,000 people. [3] Concomitantly, we witnessed in Sweden at that time the radicalization of a markedly xenophobic campaign against Muslims, particularly refugees from Iraq. A main ingredient in this campaign was the agitating by government agencies, the State-owned media and MSM, of the issue Muslim "honour-killings", giving the popular impression the media referred to as an endemic phenomenon. [4]
The exact number of deportations of Iraqis that ensued is not known. What is known, however, is that Sweden had refused 28 per cent of the applications for asylum by Iraqis refugees in Sweden in 2007 [the figure according to the U.S. report in the WikiLeaks cable; [2] the official figures admitted by Sweden is 26 per cent].  As the Swedish Migration Board had reported 18,599 such asylum requests regarding Iraqi refugees, the estimated number of refugees eligible for repatriation or forced deportation for only that year 2007 could have been over five thousand.


Minister Tobias Billström admitted in an interview with SvD 21 January 2011 that already 800 Iraqi political refuges have been transported under force by Sweden [skickats med tvång] back to Iraq, back to the regimen they had fled. [5]


Several international Human Rights organizations have criticized the Swedish forced mass-deportation of Iraqi refugees. For instance, observations have been put forward by the Council of the European Union, Amnesty International, and the United Nations High Commissioner forRefugees (UNHCR); these organizations expressed concern for the security of the refugees whose repatriation have been enforced by Sweden. [6] In November 2010, a deportation schedule of 800 refugees was stopped after an intervention of the European Court of Human Rights; however the deportations were resumed shortly after on the 15th of December 2010. [7]
The organization  Asylum Movement in Sweden reported 19 October 2010 that Sweden had refused to comply with  The European Court of Human Rights (ECHR) communication sent to Sweden, Holland and England "asking these countries to give inhibition (temporary stay) to all Iraqis who applied for it while ECHR made an investigation on the security conditions in Iraq. Holland immediately gave a general inhibition to all Iraqis in the country, but Sweden did not even inform the asylumseekers or their lawyers for weeks about the possibility to apply according to this interims, or emergency rule, Rule 39." [8] The European Council on Refugees and Exiles, ECRE, interviewed on 2 December 2010 Thorbjørn Jagland, Secretary General of the Council of Europe on the question of Sweden’s deportation flights. Jagland replied, “The decision to return a person to a country where he/she faces a real risk of being subjected to torture or to inhuman or degrading treatment or punishment may give rise to an issue under Article 3 of the Convention. My position on this is that Member States should take their obligations under the European Convention on Human Rights into consideration when returning foreigners to their countries.” [9] 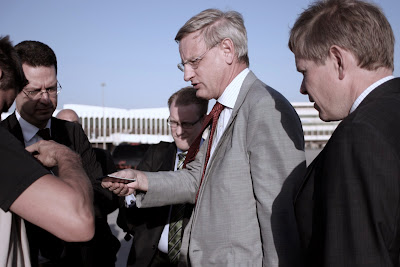 This is reported in the WikiLeaks cable: [11]

Bildt observed that without a mechanism for returning illegal aliens, the immigration problem would spiral out of control in a country of only nine million inhabitants. Both the FM and Immigration Minister Tobias Billstrom said recent
arrivals were more difficult to assimilate because they often arrive destitute (Billstrom estimated travel expenses alone exceed USD 20,000), poorly educated, and without professional or language skills. Bildt and Billstrom also mentioned
several high profile honor killings as prompting more calls for stronger immigration policies from the Swedish public.

According to several media reports in Sweden - using the WikiLeaks source above - the Swedish ministers Carl Bildt and Tobias Billström took up the issue of Iraqi refugees to Sweden focusing on the "problem" of honour-related killings.
For instance, the leading paper SvD published,
"American Embassy personnel reported in a new WikiLeaks document that Ministers Carl Bildt and Tobias Billström referred to honour-related killings and to opinion for limiting the number of Iraqis in Sweden" [See image below] [12] 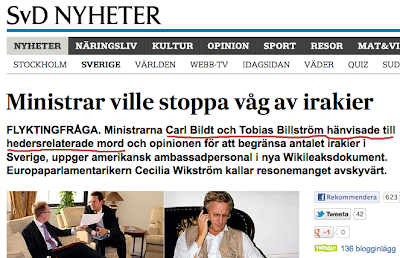 
And how to "limit the number of Iraqis in Sweden"? Here is when agitating about false epidemics on Muslim honour-killings comes in handy, to legitimatize among the public the repatriation and forced deportation of Iraqi political refugees. But these deportation measures had quite another explanation, a one more "State secret" which we the people could learn about thanks to the work of WikiLeaks.

The facts on Honour-killings in Sweden

This is instead the found prevalence on Muslim honour-killings in Sweden, according to an investigation I performed in answering The Ethics Research Committee in Uppsala:

The Observed/Expected Ratio = 0.2 indicated a clear underrepresentation of the Muslim cases among Family-related violence with women resulting in FATAL outcome in Sweden during the period 1990-2004. Chi squared distribution: Chi squared equals 10.095 with 1 degrees of freedom. The two-tailed P value equals 0.0015 (χ2= 10.095, d.f.= 1, p= 0.0015). Conclusion: Muslims found to have statistically significant underrepresentation in cases of family-related violence with women resulting in a fatal outcome in Sweden. [13] 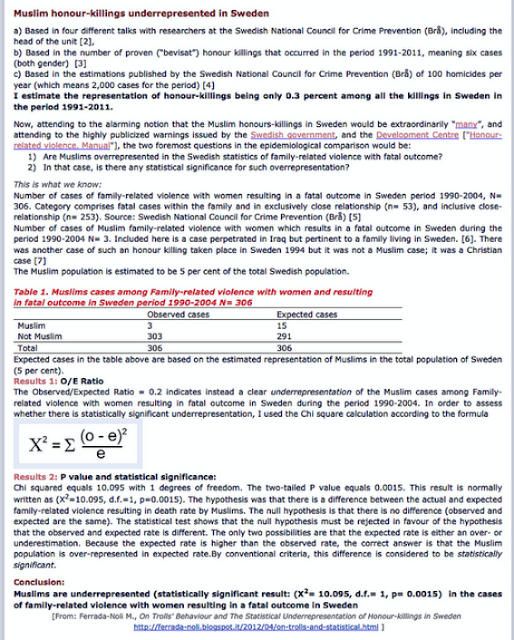 Sweden has the obligation under international law to see that the treating of ethnic minorities, as a group, should be as fair as its treatment of the ethnic majority, or any other cultural minority, with the same rights and human respect.

Honour-related violence is a horrible thing; as horrible as any family-related violence, regardless if it is perpetrated by Swedes, Muslims or other minorities. Yet, an "epidemics" of Muslim honour-related killings have never been demonstrated in Sweden. More over, our investigations - done in the line of my years-long research subject Cross-cultural Fatal Injury Research at the Karolinska Institutet - shows an underrepresentation rate.


What is actually a problem in Sweden is that the State and media sensationalize cases of honour-related violence and killing but have failed in real terms on multiple occasions to protect victims of either ethnic Swedish or immigrant background from domestic violence-even when these same victims have sought help. The issue at hand should be how to improve advocacy and protection services of victims of domestic violence, not how to most effectively whip up Islam-phobia for the benefit of political platforms, populism, and “buddy-relationships” with foreign States.