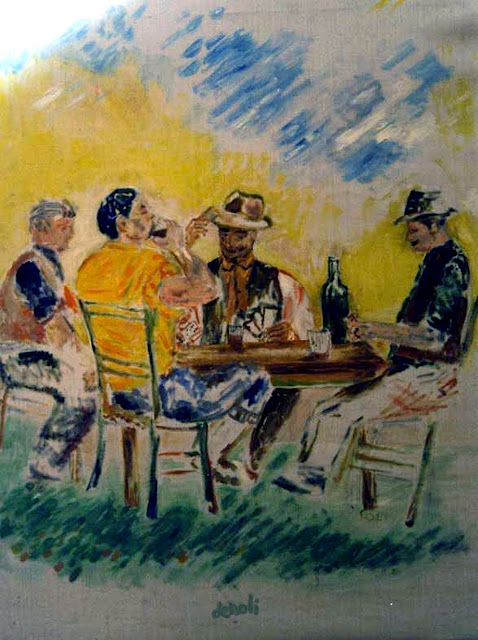 Ferrada de Noli, Giocco di carte in campagne, 1983
In March 2012 a polemic did arise between WikiLeaks and the Swedish newspaper Expressen around accusations of a purported campaign of WikiLeaks versus Sweden.  Against this backdrop Traci Birge published in Professors blogg a piece comparing international awards bestowed to Expressen, respectively WikiLeaks / Julian Assange. In her present comment she gives an update around that subject. Traci is a PhD candidate with a solid research background with, among other merits, peer-reviewed and expert scientific publications. Following Traci's text, a Note by Professors blogg.
Submitted contribution
by Traci Birge
Back in March, and during a controversy stirred up by Expressen that WikiLeaks was to embark on a "campaign against Sweden", I reported in Professors blogg on Expressen's extensive emphasis on their paper as "an award winning daily". Expressen’s reporting on their awards came amidst the paper being challenged for a series of unsubstantiated claims they made against Wikileaks - mainly the referred "campaign" against Sweden. The award narrative was repeated both in their articles and on Twitter by Expressen's editor Thomas Mattsson during the time when critics demanded Expressen either prove the allegations they were making or withdraw their libel and apologise to Wikileaks and readers.
Mattsson never disclosed that the awards he was referring to had nothing to do with journalism and that they were not independent. In fact, the awards were for marketing. Further, Expressen or its owner, Bonnier, had its own people on the boards of the organisations or panels handing out the awards. These facts seriously call into question the independence of these awards.
It is said there “is nothing new under the sun”. Expressen has just won at the INMA marketing awards again, and they are very proud of it. On May 10, Editor Mattson wrote, "We won an Oscar last night" He is most proud of the "2nd best in show" for the "Expressen Bus" which was a real hit with the jury because "...it has become a brand engine to connect readers with Expressen's employees - a clear symbol of active journalism that has strengthened the brand.."
Conveniently, Expressen is represented on the Board of Directors of INMA  by Bengt Ottosson, President/CEO of Expressen.
Perhaps an "Oscar" is an accurate description when the awards entail throwing a party for yourselves and handing out awards to each other in Los Angeles.
Based on the awards received, Expressen has increased its success in marketing and has been recognised for those achievements. There are two important points to understand in Expressen’s awards narrative, however. The first is that Expressen’s CEO is on the Board of Directors of the organisation that handed out the INMA awards and this calls into question the independence of the awards. The second is that Expressen’s success in marketing should not be used to obfuscate the fact that their reporting of such issues as Wikileaks and the case of Julian Assange in Sweden has been sensationalist and biased at best. There are strong concerns over the motivations behind the unsubstantiated claims the paper made in their last series about Wikileaks. Expressen never produced evidence of a “Wikileaks campaign against Sweden”, nor did it retract their statements of one.
It will be great if Editor Mattsson or someone else takes Expressen in the direction of becoming an (independent) award-winning newspaper for journalism. So far, however, its successes are primarily in the field of marketing.

Expressen’s Editor-in-Chief Thomas Mattsson has – to the best of my knowledge - never claimed that the referred awards were for journalism. On the other hand, several Expressen’s journalists have been bestowed major Swedish journalist prizes, among others Micke Ölander, Cecilia Hagen, Mats Olsson, Peter Kadhammar, and legend Sigge Ågren. Besides, the eventual role of Expressen's CEO in the awarding process as such is not signalled, and in fact there is a strict Swedish ethic praxis: if a member of a committee or Board of Directors would face the reviewing of a work representing any conflict of interests (recusing), he would have to abstain participation in such deliberation. Finally, Mattsson has himself declared that the paper is owned by Bonniers and Expressen’s bourgeoisie ideological profile is not occult behind a “leftist” pose -- as prevalent in other Swedish papers while in the main defending the same status quo. I mean, ideological affiliation is not the issue, but the facts in analyzing journalism endeavours is./ M Ferrada-Noli

Thanks, Professor Marcello de Noli, for your comment at the end of my post. I have a few additions to make in response.
Firstly, thank you for pointing out that there are good journalists at Expressen. It has not been my intention to give any other impression. I hope that the good journalists at Expressen are able to lead the way in improving the quality of the journalism at the newspaper as a whole. Unfortunately, a few good articles or journalists cannot by themselves undo the damage of bias endemic to some of Expressen’s reporting, including on Wikileaks/Julian Assange. It requires real structural change and implementation of stronger journalistic standards at the newspaper.
Secondly, I bring your attention to the ample evidence via social media (Twitter in this case) that Expressen actively sought to deflect public demands to produce evidence of the so-called “Wikileaks internal memo” by insisting that they were above reproach as a reputable news organisation. The awards narrative was a part of this strategy. The misleading way in which the “award winning newspaper” narrative was constructed and presented (especially to the international audience) is evident in these examples:


https://twitter.com/#!/Expressen/status/173545588921602048
https://twitter.com/#!/Expressen/status/174380180087902208
https://twitter.com/#!/Expressen/status/173131006549831680
For more examples, take a look at @expressen for late February-early March 2012. More Tweets on the Wikileaks topic are found for the same period on @ThomasMattsson.
Thirdly, I draw your attention to the recent comments by Editor Mattsson on his Twitter account. It is easy have a look at his account but I will give one example he Tweeted today in which he promotes a photo of the awards ceremony in which Expressen CEO Bengt Ottosson et al receive their INMA awards http://lockerz.com/s/207579135 . What he fails to mention is that Bengt Ottosson is also on the Board of Directors of INMA. Many people would see this as a clear conflict of interest. At the very least, full disclosure of such connections (however awkward) should be made.
Media organisations shape public opinion and awards are part of what forms people’s opinions about the legitimacy of organisations. All awards are not equal in quality. That Expressen failed to disclose these potential conflicts-of-interest and presented the “International Awards” as awards for political coverage indicates to my mind that it has a long road to trod towards transparency, fairness and accuracy.
In contrast, the awards Wikileaks and Julian Assange have received are from independent and highly respected media and human rights NGOs. A list of those awards is illustrated here https://twitpic.com/9jb1pl .

Anonymous said...
This comment has been removed by a blog administrator.
5:10 pm