The NATO factor. Extradition process initiated in Sweden against the WikiLeaks founder is to the uppermost extent POLITICAL

All across this process, the facts have indicated that the case against the WikiLeaks founder has been politically motivated, politically orchestrated, and politically profited.

x
Statement with reference to the equivocal, fact-against notion "the process in Sweden against the WikiLeaks founder Julian Assange is not political"
by Marcello Ferrada-Noli

In a widest perspective, these are the beneficiaries of the process initiated in Sweden against the WikiLeaks founder:

Video above from NATO Channel:
"Sweden is an active provider trough contributions with NATO-led operations"
a) The political sectors in the Swedish government seeking even a more favourable status in NATO, mainly on behalf of Sweden’s corporative interests. Sweden, which recently achieved an export record of$1.95B in military sales, is also quoted being "the third largest exporter of military materials to the US".  The political character of these endeavours were further placed in evidence by the interferences in the "legal" process  by Sweden's Prime Minister Fredrik Reinfelt 2011 and 2012. In recent developments:

Whilst i) the kingdom's political leadership through the Swedish defence minister writes in the Swedish media [SvD 15/1 2012] about his office's great pride and satisfaction for Sweden’s military collaboration with NATO and also advocates the need of a further deepening in such political and military commitments with the US, ii) Prime Minister Fredrik Reinfeldt interferes about the case Assange with declarations in the State Radio Broadcasting [Swedish Radio, SR, 25/1 2012] with similar appeals on national pride. Reinfeldt implies for instance, that the international criticism in this case conveys also an attempt to discredit or minimalize matters of national political development, such as our, quote: (Swedish) good rape legislation in this case. 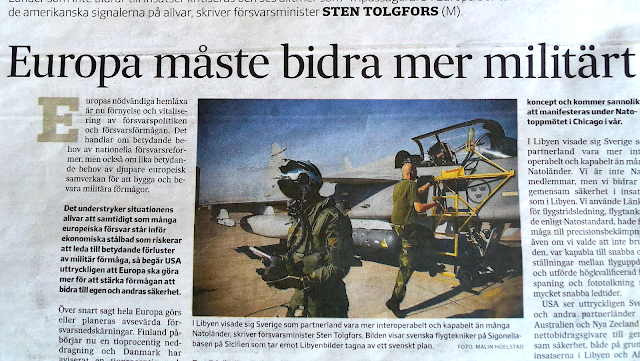 Article authored by Swedish Defence Minister Sten Tolgfors in Svenska Dagbladet 15 Jan 2012. Tolgfors states "As (NATO) partner country, Sweden demonstrated in Libya being more inter-operative and capable than many NATO countries"
b) A sector among fundamentalist Swedish feminists,  politically lobbying towards obtaining in the Parliament a broaden enhancement of the rape legislations, including further positions of privilege in the courts of justice not from an equality standpoint but from a supremacist-feminist perspective. This, mainly a right-wing radical-feminist cohort, includes notorious former gender-ombudsman Claes Borgström and several other politicians from the Social democratic party such as one of the Assange accusers, at the time the Political Secretary of the social democratic “Brotherhood” – as well as from State-feminists.

This so called "radical" feminist campaign - which hardly represents the progressive, pro Human-Rights Swedish feminism -  has declared openly and publicly that the case Assange is a symbol in such struggle.

c) Some political opportunists, bureaucrat officials, and journalists pursuing career advances in the premises of political correctness, and – despicably – by using spurious methods to position a chauvinist, pseudo-nationalist psychosocial campaign. That has been the case, for instance, of the smear-campaigns devised to blame WikiLeaks Julian Assange for the drop down of Sweden’s international prestige.

d)  Exactly as it was in the political extradition case of dictator Augusto Pinochet during the proceedings in London (Pinochet’s lawyer being the very same Ms C. Montgomery, chosen by the Swedish government to defend their interests upon the very same courts): Finally the decision is taken at the political, executive level. Is ultimately the Swedish government, –which in a highly political decision – shall rule the extradition fate, and life, of Julian Assange.

The neglecting or denial of the facts above indicates either simply naivety, or  simply opportunism. 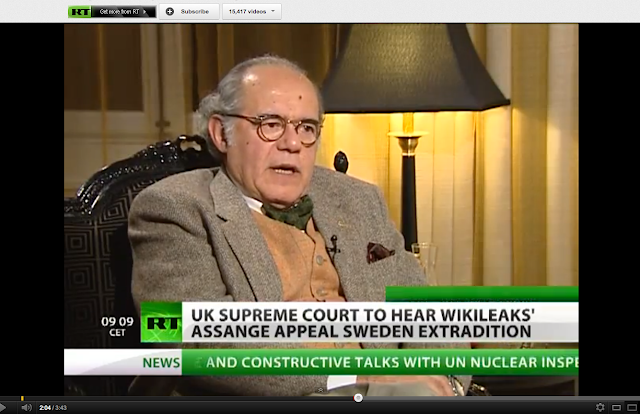 Above, in “Will Sweden extradite Julian Assange to the US?”: “Surely Sweden's famed neutrality would prevent such a thing?" Reply: “Sweden has a very clear-cut proximity and collaboration, even in military operations such as campaigns initiated by NATO...a clear-cut pro-NATO policy on the part of Sweden and that is not neutrality!”

Excerpts of the video above, quoted from a full transcription in “Sweden unbiased? Assange appeals extradition”:

"[[Others have gone beyond legal arguments, saying that the storm raised by Julian Assange through WikiLeaks has made him a target for political interference. It is a charge which has met with anger from senior figures in Sweden's legal establishment.
“Political reasons are ridiculous,” said Sven-Erik Alhem, a former Swedish prosecutor. “I am very, very tired of hearing anything about that, because so many statements have been made in London and elsewhere about political reasons and that is ridiculous, nothing less than ridiculous.”

However others point to wider trends, trends as wide as those washed over by the WikiLeaks flood itself. Across the Atlantic, US authorities enraged at having their secret documents exposed, might seek to have Assange extradited there to stand trial.
Surely Sweden's famed neutrality would prevent such a thing?

“I would disagree as to whether Sweden is a neutral country,” Stockholm University professor Marcello Vittorio Ferrada de Noli told RT. “Sweden has a very clear-cut proximity and collaboration, even in military operations such as campaigns initiated by NATO. You have, for instance, the Swedish presence in Afghanistan.

“You have a clear-cut pro-NATO policy on the part of Sweden and that is not neutrality,” Professor Noli added.]]"