Professors blogg introduces to the Swedish audience a new article by notable feminist and writer Naomi Wolf, and that she published in The Huffington Post .
Naomi Wolf is world-wide known as a leading spokesperson of the Third wave of the feminist movement. Although the remarkable censorship exercised in circles of the Swedish media-apparatus against her article  Karl Rove, Sweden, and the Eight Major Aberrations in the Police Sex Crime Reporting Process in the Assange Case , thousands of interested readers could find the way to her publication in these pages, mainly trough twittering by friendly sites all over.
xxx
Sweden used to enjoy a selective, well cultivated journalist body. Yet, at the shadow of the scandalous treatment in the main press and the State-controlled networks against Julian Assange and his project WikiLeaks, it has become fashionable that journalists would compete in giving the impression to ignore, wishing to ignore, or pretending taking no notice about this real assault against freedom of expression which currently take place in Sweden. For is not only the Assange case which characterizes the period in current Sweden, for many also serving as a dense covering smoke.
It is the time also in which the government does secret pacts, hidden to the Swedish Parliament, to sell information of Swedish citizens to foreign powers. It is the time under which notorious collaborators in the state-implicated violations of humans-rights, goes unpunished, and laugh cynically from their safety residences in the USA. Those making possible the CIA intervention in Swedish soil - such as top politicians in the former social democratic government - aimed to implement extraordinary renditions of political prisoners from Sweden. An euphemism which in fact means exactly - for the real life of many - to be transported like chained beasts  in a ride to be end in brutal torture by the shameless cruelty of yet other docile regimes. It is also the time in which foreign embassies provide orders to local officials to do home-searching, looting and pillaging, after the design and profit interests of corporative-entertainment Inc.
And for the most part,  Swedish journalists do not utter a single word
The creepy and accomplice silence of the media is devouring the soul of a country  otherwise dignified by its beauty, its ethics, and its peace.
That is why I believe that every word in Naomi’s article - starting with the title - may serve as a reminding to every Swedish journalist that has turned their backs on their own professional call. "Cojones" means, according to Google, "särskilt, särskilt manligt". Guts, in other words.
A message to the coward and the opportunist. Those obeying a power deprived of authority;
Those abstaining to report, disclose or do further analyses of the secret wrong doings - and further lying – on behalf of a corrupted system: A political establishment determined to make prevalent infringements of Swedes’ personal integrity and its selling to foreign powers in exchange of miserable subservient positions of pseudo influence or illusions of command.
A system supported on the ideological behaviour of invertebrate politicians, media people and bloggers of a variety of colours, from blue and violet to reddish and light-green. All which have profited on their pretended advocacy for liberty of expression, free communication, "liberal" values, and "integrity", and when it comes the moment to fight for real they go and hide behind a ”Swedish consensus" - the politically correct synonymous for sheered chauvinism.
And a message to all of those miserable columnists which have misused these historic, hyper dramatic disclosures by Wikileaks on the brutal atrocities against civilians and journalists in Afghanistan or Iraq, etc,  just to move forward their fanatic, obscurantist, pseudo-feminist political and ideological agenda.
In agreement with the author I link to the original version./Prof. Marcello Ferrada-Noli. 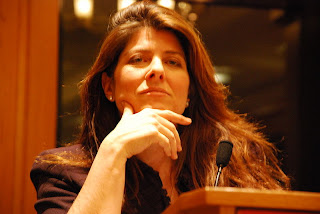 "WikiLeaks, Revolution, and the Lost Cojones of American Journalism"
By Naomi Wolf:
"Now that the WikiLeaks releases about Tunisian corruption have directly sparked a peoples' uprising in Tunisia; now that Egypt is in the throes of pro-democracy protest driven in large measure by WikiLeaks' revelation in the Palestine Papers about US manipulation of Palestine, surely one would expect key U.S. news organizations and journalists to rally prominently to the defense of the right to publish that that site represents." Read further