At Supreme Court Hearing, A Silent Protest from ProfessorsBlogg


"All rise" - Not Professorsblogg
I remained seated in protest of the Pinochet-like political verdict on Assange’s extradition as the seven Supreme Court judges rise to left the courtroom. I rise only after they turn to leave

After the Supreme Court judgment of the 30th of May in London I talked with a prominent British QC with first-hand insight in the Swedish case against Assange. The lawyer told me, “You see, this is Pinochet extradition-case revisited”. Indeed; I had already stated that in the Newsmill article Professor: Case Assange shows that Marx was right,

“Predictably, the London courts ruled no-extradition in favour of mass murderer Augusto Pinochet while assisted by his lawyer Clare Montgomery. The USA friendly dictator could return to Chile where he remained free and unpunished. Predictably again, the same courts rules the opposite - yes to extradition - in the case of [Human Rights] publisher and USA enemy Number One Julian Assange, after the request from Sweden which is represented by the very same Pinochet's attorney, Clare Montgomery.”

Hence my protest at the Supreme Court the 30th of May 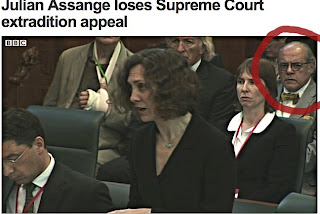 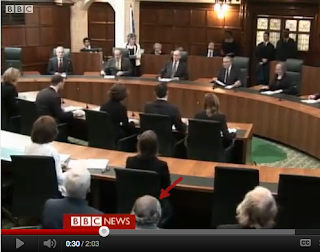 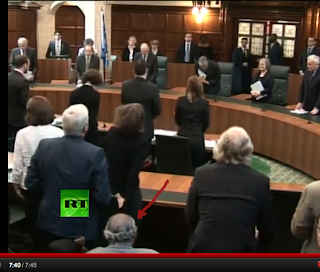 Posted by Marcello Ferrada de Noli (Italy) at 10:58 am