Illiteracy or else? On Guardian’s Dazing Incorrectness Describing The Case Sweden VS Assange

Introduction
When Ecuador announced - while studying Julian Assange's political-asylum situation - that it has giving diplomatic shelter to the WikiLeaks founder at it's Embassy in London, UK and Swedish mainstream were left in a kind of panic-state of "emotional" or creative numbness -- this judging from respective articles on both sides of the North Sea.
Is this a sign of awareness that their anti-WikiLeaks media-war will be soon finish in anti-climax collapse? Or because they were not be able at the end to publish front-pages portraying - as announced - a Julian Assange "taken prisoner in London by Swedish police and transported to Sweden in time for the Midsummer's day celebration"? That arrogant-chauvinist, triumphalist fashion (typical for Bonnier's journalists) – is found in a Dagens Nyheter article  published  after the Supreme Court extradition verdict.
On the 23th of June it was about Guardian insisting and insisting on that Julian Assange is actually charged or “might be charged” “or will be charged” for “rape” in Sweden. Those notions are so exceedingly fact-wrong, and so reiterated, that "pathetic" has come to replace "falsehood" in describing Guardian's stance against Assange. 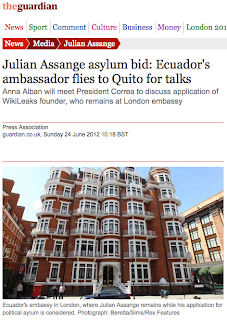 Peter Galbraith article in Guardian Assange's asylum bid and Washington's WikiLeaks response: matching hysteria on the 24th of June, gives further deceitful information. The Guardian's article takes up, among other, issues of:
In all the said issues the Guardian's article demonstrates either poor fact-knowledge on the subject -- the author has not checked facts to sustain the referred statements, or simply the Guardian is again only exhibiting new evidence of its hostile anti-Assange stance .


I
Sweden’s treatment of refugees and deserters
First, about "harbouring American draft dodgers and deserters": Dagens Nyheter (DN) published 29 June 2012 the article "U.S. Military in Stockholm to get deserters home (to stand trial)", which states explicitly that those that are NOT SWEDISH CITIZENS can theoretically be rendered ["lämnas ut"] to the U.S.. Note that the article does not formulate "could be rendered", but "can be rendering to". 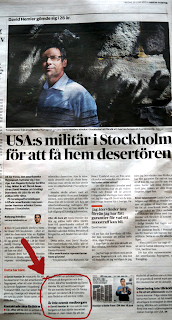 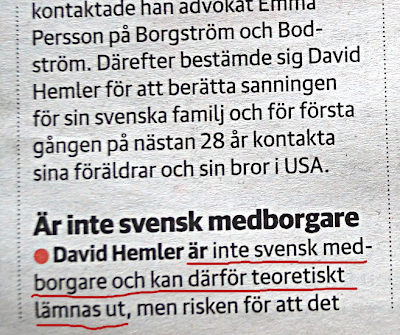 The episodes of "harbouring dodges and deserters", meaning when vapen-vägrare arrived in Sweden, it occurred in only a segment of Swede's history, and that was during the Vietnam War about 40 years ago -- when Sweden’s PM was Olof Palme. Sweden is nowadays, to the highest degree, an aligned country with NATO. Does really this journalist imply that Sweden would harbour refugees combatants deserting a war in which Sweden is participating under U.S. command, like in Afghanistan for example?
The real tradition of Sweden regarding deserting soldiers seeking political asylum
Looking back into history in the record of Sweden with regard to political extraditions or political deportations, we find unfortunate, nasty illustrations. We might find Russians forced to deportation to the former Soviet Union during the Stalin era. We might find political refugees deported with Swedish police escort to their countries of origin to stand torture and death. And we might find asylum seekers delivered in secrecy at Stockholm airports to the US intelligence services for being transported to torture elsewhere that in the USA.
What I mean is that Sweden has been capable - for political reasons of own national interest (I do not accuse Swedes of bad or "diabolic" intentions) to crucify their own juridical principles when it comes the moment of international political transactions that are judged critical. The history of Finland is a living proof of that. And the reference to the deals with Germany during the 40's, which I recently took in my article Sweden, NATO and Assange, should also be considered in the context of Sweden's realpolitik when it has come to decide matters of political extradition or deportation in the context of international governmental pressure.
Further facts on the issue of Sweden mercilessly deporting deserting combatants in the Section "A wider political background on the Sweden's extradition precedents regarding political prisoners" in my analysis In the history of Swedish extradition of political prisoners to foreign powers
II
Sweden’s “neutrality”
Galbraight describes Sweden as “a neutral country with a long tradition of harbouring American draft dodgers and deserters“. What? Sweden 2012 "neutral"?
In fact, "Neutrality" is a political stance Sweden has officially and openly abandoned since several years ago. Many would even argue Sweden was never neutral. This is one of the serious flaws in the article, and which also constitutes a premise (false premise) in the further analysis of the author. Is not only that Swedish troops even form part of the NATO expedition forces in Afghanistan. As I reported previously (The NATO factor. Extradition process initiated in Sweden against the WikiLeaks founder is to the uppermost extent POLITICAL), Sweden has even taken the role of political proxy in the advocating for stronger commitments towards NATO in countries of Europe.

It would have been enough for the author to check the article "Europe should contribute more militarily" published on behalf on NATO in leading papaer SvD, by the Swedish Minister of Defence. There the Defence Minister states, among other, "As NATO-partner country, Sweden demonstrated in Libya being more inter-operative and capable than many NATO countries"
I refer the reader to these two analyses, fact-based, on the issue Sweden's "neutrality", a) Sweden, NATO and Assange, and b) NATO medals to Sweden. Can Sweden US-aligned stand guarantee fair extradition process?
III
Sweden’s praxis on extradition cases to the U.S.
The truth Guardian do not know, or do not believe, or do not want to say
The facts: Regarding the open extradition requests from the USA since 2000, Sweden has granted such extradition in the TOTAL OF CASES in which the prisoner was in Swedish territory. This is based in statistics according to Sweden's Justice Ministry.
As I have previously treated this issue in detail, I refer the reader to, for instance, chapter "The myth on that Assange’s extradition from Sweden to the US is not likely" in Sweden's political decision on the extradition of Assange to the U.S.


IV
Political asylum practices in Latin America
The Guardian's article also stated: “For much of the continent's history, coup or revolution was the usual path for political change. New rulers preserved their future exit options by allowing safe passage into exile for any ousted leader who made it to a brotherly South American embassy.”
Guardian cannot be more wrong. Thousands of political refugees forced to leave countries in Latin America, for instance after military takeovers instigated or supported by the USA, have been received in European countries. There were for instance more political refugees from Pinochet’s Chile in Europe and North America, than they were in South America countries. Were does the Guardian take its statistic from to sustain their Anti-Assange hysteria?
At this stage, when Assange’s lawyers or supporters have corrected this smear attempts so many times described from time to time in Guardian articles, there is NO excuse for such publicist, journalistic or ethical, “flaws” from the Guardian.
Posted by Marcello Ferrada de Noli (Italy) at 10:42 am