A question for suicide research 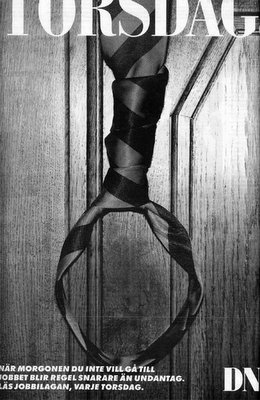 Appealing herald of a hanging tie. A new case of the Werther effect?
- Not, we hope.

Would the white-collar suicide incidence for the period March - April 2006 increase in Sweden (in comparison to previous period-prevalence & trend)?

The picture at the left, which may suggest the impression of a tie as a "hanging rope", is a full-page sized advertisement in today’s edition of the main Swedish newspaper Dagens Nyheter. The published picture is in colours and the legend reads:

The newspaper is marketing their own supplement (to appear later in the week) on advertised job opportunities. But, with a raising unemployment rate and a high competitive labour market, what are the options suggested to the one who can not change job or has been unable to get a new job, or a job at all?

In fact, the scientific literature has since very many years informs from time to time on the risks of suicide-oriented clues by the media (even if not produced with that intent, as it surely is the case of Dagens Nyheter), or of information on suicidal behaviour related subjects in the media, done by "non-professional" people.
Some of the latest of these empirical based publications appeared in the journal Academic Psychiatry, in Social Science and Medicine, and in Archives of Suicide Research. Here below are the abstracts of the articles with the corresponding reference. 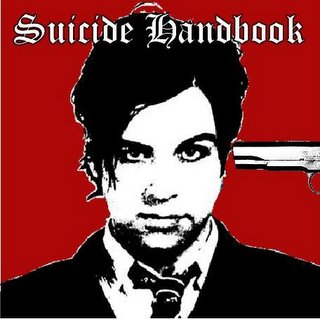 The media and suicide.
By Sudak HS, Sudak DM. Department of Psychiatry, University of Pennsylvania School of Medicine, USA. hsudak@afsp.org
OBJECTIVE: The authors aim to inform readers of the theory that when newspapers, film, and television describe suicidal deaths, additional suicides may result by virtue of contagion or copy-cat effects; to review data that support and refute this theory; to present some promising and recommended ways to prevent copy-cat suicide; and to cite news-media examples of both particularly bad and good reporting. METHODS: A review of the literature on media-related suicide was conducted, which included reviewing materials published in scientific journals and data published by the U.S. Public Health Service, Centers for Disease Control, and materials from private, not-for-profit agencies. RESULTS: Data support an increased number of suicides resulting from media accounts of suicide that romanticize or dramatize the description of suicidal deaths. Specific guidelines for the media that may be able to decrease these additional deaths have been devised. CONCLUSION: Psychiatrists should be familiar with the harm that may result from improper reporting of suicide in the media since they may be called upon by reporters or family members following the suicide of one of their patients or following the suicide of a newsworthy person. Following the media guidelines available may prevent such contagion effects from occurring. 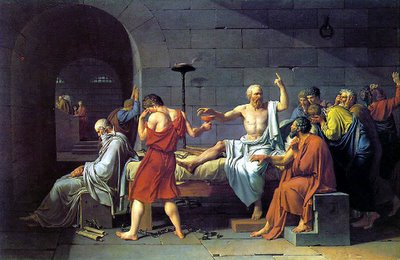 This study aimed to determine whether media items about suicide were associated with differential increases in actual suicides. Data were available on 4635 suicide-related items appearing in Australian newspapers and on radio and television news and current affairs shows between March 2000 and February 2001. These data were combined with national data on completed suicides occurring during the same period, by a process that involved identifying the date and geographical reach of the media items and determining the number of suicides occurring in the same location in selected weeks pre- and post-item. Regression analyses were conducted to determine whether the likelihood of an increase in post-item suicides could be explained by particular item characteristics. We found that 39% of media items were followed by an increase in male suicides, and 31% by an increase in female suicides. Media items were more likely to be associated with increases in both male and female suicides if they occurred in the context of multiple other reports on suicide (versus occurring in isolation), if they were broadcast on television (versus other media), and if they were about completed suicide (versus attempted suicide or suicidal ideation). Different item content appeared to be influential for males and females, with an increase in male suicides being associated with items about an individual's experience of suicide and opinion pieces, and an increase in female suicides being associated with items about mass- or murder-suicide. Item prominence and quality were not differentially associated with increases in male or female suicides. Further research on this topic is required, but in the meantime there is a need to remain vigilant about how suicide news is reported. Mental health professionals and suicide experts should collaborate with media professionals to try to balance 'public interest' against the risk of harm. 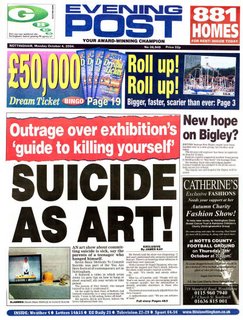 etzersdorfer@fbkh.org
Although the Werther effect is well known, up to now a correlation between the differential distribution of particular media reports and subsequent imitational suicides could not be found. This study investigates a celebrity suicide by gun in Austria, which led to extensive reports in the largest Austrian newspaper, whose distribution shows substantial regional differences. The numbers of suicides by firearm in the 3 weeks after the reporting showed an increase over the 3 weeks prior. Regional analysis revealed a strong correlation of suicides by firearm and distribution of the newspaper (log odds ratios; r(9) = .62; p = .04, one-tailed). This dose-response effect explains 40% of the variability of changes. These results underline the influence of media reports on suicidal behavior.
Posted by Marcello Ferrada-Noli (Sweden) at 9:04 am