Open Letter To The Prosecutor-General Of Sweden

To the Prosecutor-General of Sweden
Mr Anders Perklev

Amidst these battered times for Sweden’s judicial reputation, few things would have been more revitalizing than a statement by the Attorney-General, setting the record straight on the international criticism concerning the mismanagement of the Julian Assange case.

However, your comment on the public stance of the Liberal Party's judicial spokesperson Johan Pehrson MP, gravely risks the prestige of the Swedish legal system.
You stated:  "It is remarkable that a parliamentarian openly criticises individual cases like this. It goes against the separation of power between legislators and the judiciary". 1

There have been many instances of political interference in this case by the Swedish government. For instance, the statements by Prime Minister Fredrik Reinfeldt and the Foreign Minister Carl Bildt. Is it that you consider that the Montesquieu principle, 2 that you have used as your main argument, contains an exception regarding the governmental interference in an ongoing case?

On 11 February 2011, Prime Minister Fredrik Reinfeldt stated in the DN and Aftonbladet newspapers, that Julian Assange had been indicted. He then went on to take a position that was biased in favour of the complainants in the case.  Not only was this political interference in an ongoing case, but also it was based on untruths; Julian Assange has not been charged. The statement by the Prime Minister was:

“We have an independent judiciary which also in this case acted according to Swedish law. One has even public-indicted Julian Assange on allegations of rape”. And, “I can only regret that the rights and position of women weigh so lightly when it comes to this type of questions compared to other types of theories brought forward.” 3

On 15 August 2012, Göran Haglund, Swedish Minister of Social Affairs, told the Expressen newspaper: “Assange is a very coward person that does not dare to confront the charges against him”.  And he added, “If he did the things he is accused of, I think one can call him a lowlife. He seems to be a miserable wretch." 4

Considering your comments to Johan Pehrson MP, it is peculiar that the General Prosecutor Office did not issue a statement defending the “independence of the judiciary” from executive power? This type of selective behaviour creates a perception that the Swedish judiciary is not independent.
The principle of the separation of powers precludes the interference by the Legislative of the Judiciary, and vice versa. Is it appropriate, as Sweden's Attorney-General, to publicly criticise Johan Pehrson MP for exactly the same behaviour that you exhibited? Why would a representative of the Judiciary try to inhibit an initiative by a member of the Legislature, which seeks to find a solution to this deadlocked case, that has become a serious political burden both domestically and internationally?

It is known that both the Ecuadorean government and Julian Assange would welcome the questioning of Julian Assange in London, which is standard Swedish praxis. Julian Assange has never refused to be questioned. However, he has stated that he feels there is a risk of being further extradited to the U.S.

Julian Assange’s concern is based on the fact that, in circumstances where someone has been sought for extradition by the U.S. government, and they were on Swedish soil, Sweden has granted every request.

The international community is well aware of this deadlock and the role Sweden is playing in blocking the resolution of the case. Please correct me if I'm wrong:

A. The Swedish prosecutor has refused to question Julian Assange in London and instead, for no apparent reason, requires him to come to Sweden, where he will be immediately held incommunicado. A state that would prevent normal contact with his lawyer.
B. Julian Assange, in an assessment that has been shared by the Ecuadorean government, has legitimate concerns regarding an onwards extradition from Sweden to the U.S. You must be aware that, according to well known Swedish praxis, 5 this step - if it takes the form of an extraordinary rendition - does not need to be cleared by the Judiciary.

C. This situation could be immediately solved if the Swedish government extends a guarantee that Julian Assange will not be deported.  If this were to happen, Julian Assange would be willing to be questioned in Sweden.

D. However, the government, for no tenable reason, refuses to extend these guarantees and ultimately these extradition decisions are the privilege of the government, not the Judiciary.

Against this backdrop, why would you consider it “strange” that Johan Pehrson MP, a member of the Justice Committee of the Swedish Parliament, is trying to find a solution to the current stalemate?

Many outside Sweden are concerned by the Swedish prosecutor's refusal to question Julian Assange in London and the government's refusal to issue a non-deportation guarantees, both of which are delaying the resolution of this case.

I believe this is either caused by political factors, or because the prosecutor does not have a legitimate case against Julian Assange. Either way, it is your responsibility to end this remarkable situation as soon as possible. 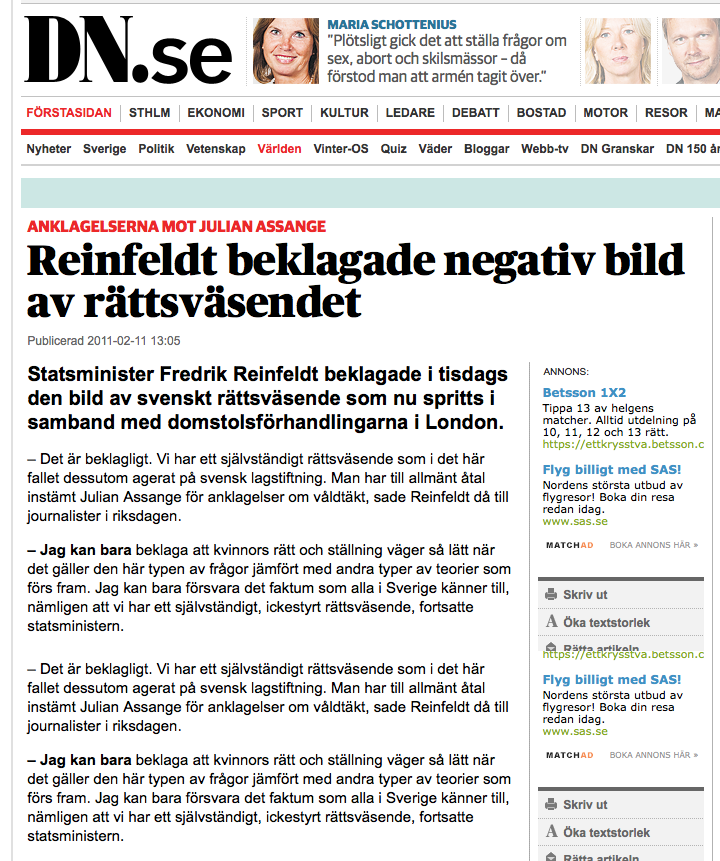