To the General Secretary of the Swedish Bar Association, Ms. Anne Ramberg

A Note to the readers of Professors blogg:

I have been absent from the forum mainly due to a) I have been working in a epidemiological investigation around a significant increasing of suicide deaths among immigrants and refugees in Sweden, which I discovered in October this year in statistical materials I had requested to the Swedish National Institute of Health; the manuscript is now under review by the Swedish Medical Journal [Läkartidningen]; b) I had to finish my manuscript for the book “Rebeldes Con Causa – Mi vida con Miguel Enríquez, el MIR, y los Derechos Humanos”; a text I plan to make available here on the 1st of January 2014 – year of the 40th anniversary of the death in combat with Pinochet’s forces, of the revolutionary leader Miguel Enríquez Espinosa.

I reassume my publications in Professors blogg with the publication of a noteworthy letter to the Chair of the Swedish Bar Association by John Goss, Rafik Saley, and Okoth Osewe. It contains a complaint against the lawyer of one of the two nominal accusers in “the case of Sweden VS. Assange” – issue that has been characterized in these columns as an scandalous or phony “legal case”; a case which in true represents mainly a political action by proxy, from the part of the US government, against WikiLeaks as organization and liberationist concept.

Among other issues, the letter point out the falsely criticism ad hominem on Mr Julian Assange, exhibited at the site of the lawyer in question, Ms Elizabeth Fritz.

I was invited to be a signatory of the letter. Ensuing, and intending to contribute by enhancing argumentation in the draft sent to me, I studied the following Swedish documents: a) Yttrandefrihetsgrundlagen ("Freedom of speech", in constitutional law); b) Tryckfrihetsförordningen (Freedom of informaltion law, also a part of the constitution), and c) Regler för advokatverksamhet (Rules in the activities of lawyers) - a document at the Swedish Bar Association. My summarized conclusion after studying those documents was that, although the items in the letter may be correctly stated, in Sweden lawyers are not subjected to investigation/sanctions for the type information activities pointed out in the letter.

On reflection, I decided not signing this letter to the Swedish bar authorities. The gist is that Swedish legal procedures do not suggest this is a viable way for non-parties to obtain reprisal for unfairness. Also, authorities could launch bogus reprisals against attorneys undertaking admirable but unpopular causes.

For my part, I intend to continue to blog aggressively for the cause of justice and human rights of the WikiLeaks founder. My next analysis to be soon published in Professors blog is dealing with "Swedish legal system's biased management of accusations regarding purported sexual misconduct on Swedish women". 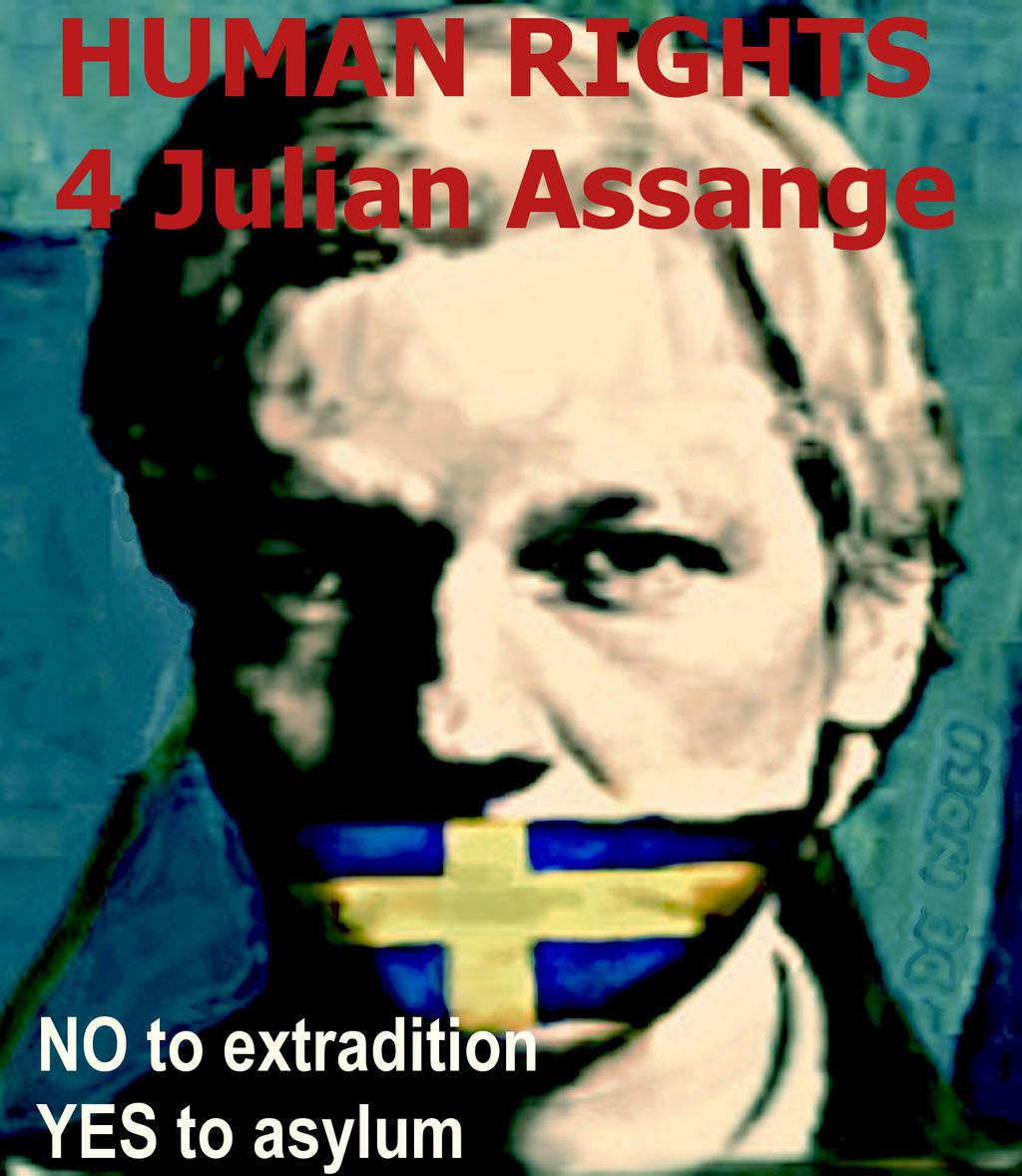 To the General Secretary of the Swedish Bar Association, Ms. Anne Ramberg

We the undersigned are lodging a formal complaint against lawyer Ms. Elisabeth Mazzi Fritz to the Swedish Bar Association. It concerns her dealings with the press in the Julian Assange case. Elizabeth Massi Fritz represents the complainant Sofia Wilen. Ms. Massi Fritz has made two conflicting statements one to the international press and one to the Swedish press which are outlined in the last link contained in this email.

An article published on her official company website seeks to blacken the character of Julian Assange and it contains potentially libellous and certainly incorrect statements made by James Ball, a former and disgruntled employee of Wikileaks. Despite contesting that her motives, and those of the prosecution service, are not political, Ms. Massi Fritz published a false political statement on her company´s website to the detriment of Julian Assange under the heading “Fallet Julian Assange”.
http://www.advokatfritz.com/?page_id=684
We find it objectionable at the very least that a professional versed in legal matters can try to influence public opinion against someone who has not been charged with any crime. We query whether such behaviour is legal in Sweden and whether it adheres to the ethical stipulations of the Swedish Bar Association. The following link brings up the article by Mr. Ball which she includes on her website.
http://www.thedailybeast.com/articles/2013/05/30/exclusive-former-wikileaks-employee-james-ball-describes-working-with-julian-assange.html
There are glaring errors in the article which are prejudicial to Mr Assange. Mr Ball stresses that during a John Humphrey’s interview Julian Assange initiated an assault on the characters of the two accusers, when in actual fact Assange said quite the opposite:

“It’s a matter of public record as far as the courts are concerned but I’m not going to be exposing other people’s lives or my own more than is absolutely necessary. That is not what a gentleman does. We don’t know precisely what pressures they [the women] have been under, exactly. There are powerful interests that have incentives to promote these smears. That does not mean that they got in there at the very beginning and fabricated them.”

“Q: So you’re not suggesting that this was a honey-trap? That you were
somehow set up by the Americans, by the CIA? You don’t buy into that idea
because your lawyer’s suggested that that’s the case.

JA: He says that he was misquoted. I have never said that this is a
honey-trap.

Q: You don’t believe it?

JA: I have never said that this is not a honey-trap. I’m not accusing
anyone until I have proof.”

The interview in full is available in two parts here. The second part contains the above misquote starting at around 1 minute 15 seconds.
https://www.youtube.com/watch?v=TFAAIsk9t90 (Förhandsgranska)

Ms. Massi Fritz has also issued two separate statements, one to the domestic and one to the international press. There are tangible differences in these separate press releases and they contradict information released to Mr. Assange´s defence team in the available police protocol.

Contained in this link are the press statements from the office of Elizabeth Massi Fritz:
http://rixstep.com/1/20130614,01.shtml
The first released statement is the one to the right, containing the information that Sofia Wilen herself reported a rape. The statement to the left is released later (June 4th) is ante-dated to May 21st and no longer claims that Sofia Wilen herself reported rape to the police.

We suspect political motives because, firstly, the government of Ecuador has repeatedly offered the use of its embassy premises in London for the Swedish prosecutor or prosecution officials to question Mr. Assange. Secondly, it is internationally known there are no known obstacles in Swedish legal procedures to prohibit questioning of a suspect abroad, because there are precedents. In April, the senior Swedish Supreme Court judge, Stefan Lindskog, delivered a public lecture at Adelaide university – Australia. He made it perfectly clear that pending legal obstacles any final decision on an extradition request by the United States government rests with the Swedish government. He also made it clear that there is absolutely no hindrance to questioning Mr. Assange in London. The Swedish prosecutor has refused to go to England to question Assange, despite the issue of questioning being the only objective of the European Arrest Warrant.

Lastly, in exclusively blaming the government of Ecuador for the legal stalemate that has arisen Ms. Massi Fritz has been unfair to Ms Wilen, as well as Mr. Assange, through deliberately protracting the case. She has published two separate statements using her position as a legal representative on behalf of her client, the named accuser mentioned above. Because she is fully aware – as well as any other informed person – that the deadlock could be broken if the Swedish prosecution service were to interview Julian Assange in London, as outlined above, or to guarantee that Mr. Assange would not be extradited to the United States. Her refusal to take either of these initiatives demonstrates that there are political motives, rather than legal representation, underlying her actions.

We respect the integrity of your office and call upon you to investigate the professional behaviour of lawyer Elisabeth Massi Fritz regarding the human rights of Mr. Julian Assange to see whether discliplinary action is appropriate under the Swedish Bar Association´s regulations.