Julian Assange on Rand and Ron Paul & Libertarians in US electoral politics. By @treisiroon

“I can see how [these positions] come from the same underlying Libertarian principle. I think the world is often more complex and by taking a principled, but sometimes simplistic position, you can end up undermining the principle.” Julian Assange 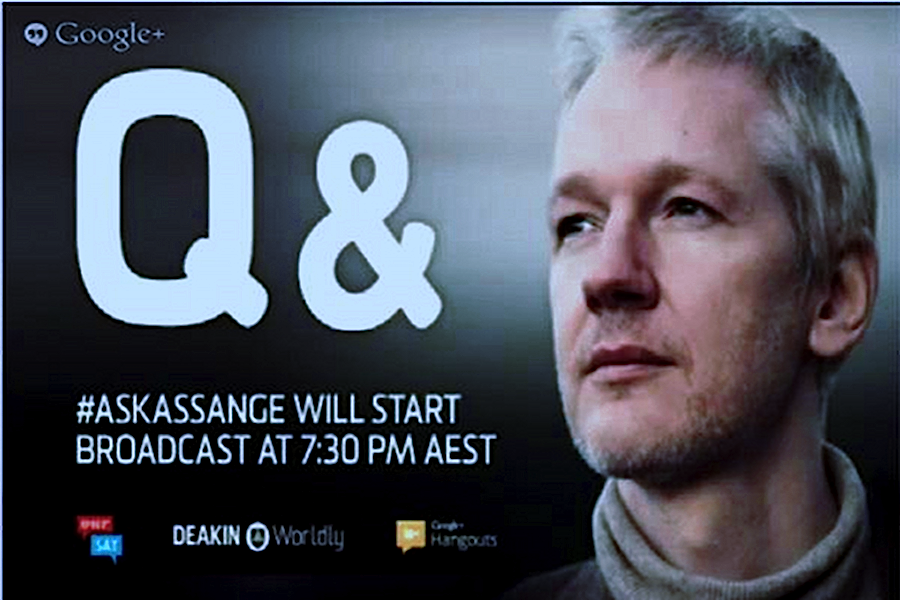 At a Google Hangout hosted by Our Say and Deakin University, Julian Assange presented his thoughts on a number of issues. Among other things, he was asked what he thought about politician Rand Paul in the United States. His response is being misrepresented in social media and articles. Here's what actually happened:

Julian Assange declared himself an admirer of Rand and Ron Paul for their principled position on defending Wikileaks and himself to Congress, opposing drones and coming from a Libertarian tradition of non-violence. He stated that the position of non-violence produces interesting results, including "don't go invade a foreign country", "don't make people join the military", "don't extort taxes from people", and "similarly other aspects of non-violence in relation to abortion-that they hold".

Some people are choosing to interpret Assange's comments as blanket approval of all of Ron and Rand Paul's positions. Note What Assange actually said in the end of his comment:

Also note that Julian Assange did not declare his own position on abortion. He described Rand Paul's position in the context or as an outcome of the non-violence value of the Libertarian tradition.

Julian Assange's actual quote regarding "Libertarian Party as the only hope"

[youtube http://www.youtube.com/watch?v=Kt8yjNrokUI?feature=player_detailpage&w=640&h=360]
(24:50-26:58)
24:50 Assange receives question on: How do you interpret swell in support for Libertarians in US- how does it pertain to our future?

Assange: "Nearly every Democrat in Congress has been co-opted by the Obama administration or DC social networks. The economically successful part of the Republican Party is often in bed with the war industry- completely in bed. So, there's now an extreme centre in the United States where the Democratic administration and a large chunk of the Republican Party have come together and are pushing forward very fast in a dangerous direction that compromises the future of US democracy. That is not a conservative movement.

Posted by Marcello Ferrada de Noli (Italy) at 12:04 am