In the context of a Nobel Peace Prize nomination, “whistleblowers are not interesting as persons; the essential issue is what they have achieved on behalf of an open democracy”

On article/interview in the Swedish newspaper Ystadsallehanda, by journalist Urban Nilmander, 19 July 2013

An article in the Swedish newspaper Ystadsallehanda, by journalist Urban Nilmander [click on image below for full text on-line), reports on the rationale of my triple nomination for the Nobel Peace Prize of Mr Julian Assange, Mr Edward Snowden, and US Army Private First Class Bradley Manning.

After noting that the said nominations are about personalities I consider "important for world democracy", the article quotes the following from the interview I had with the newspaper:

In the context of a Nobel Peace Prize nomination, “whistleblowers are not interesting as persons; the essential issue is what they have achieved on behalf of an open democracy”

“Those in power need to be challenged”

The newspaper recognizes that I am fully entitled based on my qualifications to nominate persons or organizations for the Nobel Peace Prize, but the question is, why this particular tripel nomination?


“I am deep engaged in the issue of citizens’ relationship with those in power, and I think that what (the nominated) whistleblowers have achieved is exceptionally significant”, quotes the article.

Referring to the high information-value of the disclosures of whistleblowers, I said that their reporting can be as important as investigations or articles produced by “normal journalists”. However, “I call for more investigative reporting by newspapers in the MSM. Those in power need to be challenged”

Beyond the alleged case of Sweden vs. Assange

The Swedish newspaper Ystadsallehanda also reports on my appeal of asylum for Edward Snowden, and explained in the article excerpts of my statement Why Sweden should consider asylum to Edward Snowden:

A positive statement by the Swedish authorities on that Sweden would consider asylum for Mr Snowden, will help the world to better understand the real libertarian and independent spirit of the Swedish people – an aspect that has been sadly obscured in most recent years due to the abandonment by Swedish authorities of the traditional non-alignment stance of the nation. Also, it will help stimulate anew dialogue to resolve the issues at stake and that have thrown a shadow over our sovereignty, such as the management of the case against Mr Assange:

Beyond the alleged case of Sweden vs. Assange, or the alleged irregularities of the case, the issue for Sweden is ultimately the question of self-government. And the issue of whether Sweden can reassume – as many of us dearly wish – the world podium of No. 1 country in fairness and justice, in political beauty and respect for human rights to all. 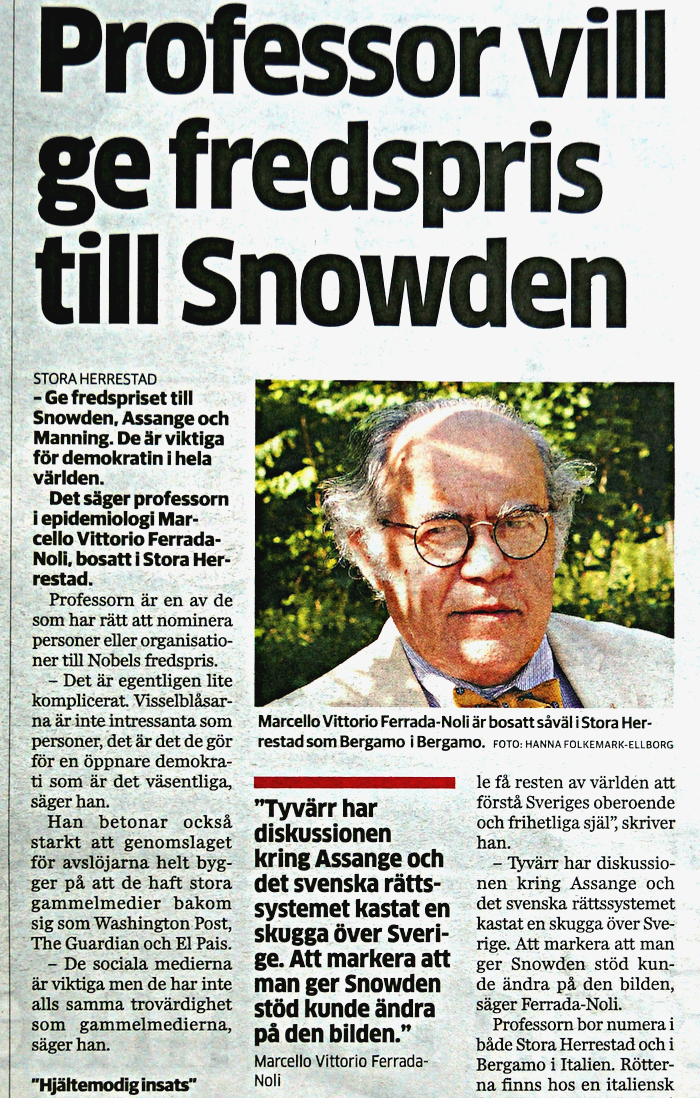 Well done.
Did you see that another Swedish professor, Stefan Svallfors, nominated Snowden for the peace price?
https://twitter.com/StefanSvallfors/status/356005221878616064/photo/1
Svallfors has also written to Cecilia Malmström, EU Commissioner, demanding European protection for Snowden.
https://twitter.com/StefanSvallfors/status/358154224355401728/photo/1
You are on the same line, I think. Nominations are important, even when they are not successful.