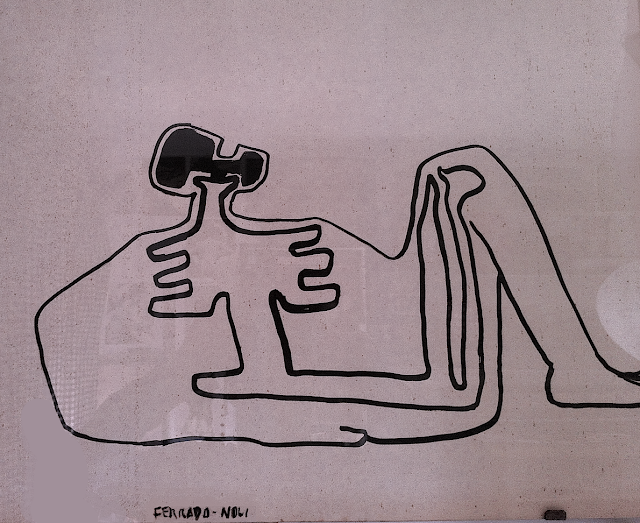 In The Future Life of Glauco Marino. Second Part.  Ferrada de Noli.
Ink on metal-coated paper. Rome 1974
Traci Birge is an American scholar, nowadays living in Finland. She advocates transparency and evidence-based journalism. Among other things, Traci has worked in Sweden as a researcher and in Kenya as a consultant for the United Nations Environment Programme. She is currently completing her Ph.D. at Åbo Akademi, Finland.
Expressen’s “Press Awards”
Text submitted
by Traci Birge
Expressen has been on a strong offensive in attacking Wikileaks.  In its English language attack on Wikileaks on Tuesday, 6 March 2012, Expressen tried to bolster its credibility by making sure to mention its wide circulation and that it has received two press awards recently.  The article stated the following:
“The material to which Expressen, awarded "Editorial Team of the Year" in 2011 by the Swedish Newspapers Association, and 1st Prize Winner in the international INMA Awards for its coverage of the latest Swedish general elections, has become privy shows that the finances and private lives of the Swedish journalists have been reviewed.”
Let us examine these “press awards”
INMA. Expressen makes it sound like the INMA award was for covering the elections –in other words, journalism. According to INMA’s own web page, the awards are for marketing, and Expressen was awarded it for their “voting kiosks it erected in connection with the 2010 national elections in Sweden”.  Bonnier released this information about the INMA awards:
“At the INMA Awards in New York, Dagens Nyheter and Expressen won prizes yesterday…  Expressen won for the voting kiosks it erected in connection with the 2010 national elections in Sweden.”
Bonnier’s page goes on to say that Thomas Mattsson, editor-in-chief for Expressen, has also blogged about the awards (in Swedish). However, on 7 March, 2012, the page was dead (no longer existed), so it was not possible to follow up on what Editor Mattsson had to say about the award.
Editorial Team of the Year
Expressen was awarded “Editorial Team of the Year” for 2011 by the Swedish Newspaper Association, but that may sound a bit more impressive than it actually is. Why? Because the jury who gave this award to Expressen was hardly impartial. In fact, it included Christina Jutterström , former CEO and chief editor of Bonnier-owned media, including Expressen.
Here is the from Swedish Newpapers Association’s own description of the award.  and “Google translation” below:
Editorial Team of the Year" Expressen
“Justification: In 43 days the door open for the readers. Editorial listened, learned, reported and made direct contact between citizens and power in an innovative way in which all media channels were used. The editors have also done a magnificent new work. It proves several important scoop that all the world's media quoted and followed up.”
Jury:
Christina Jutterström, journalist, former CEO of SVT and chief editor of Dagens Nyheter and Expressen (new)
Kerstin Brunnberg, journalist, former CEO of Swedish Radio
Anders Gerdin, consultant, former editor in chief of Aftonbladet
Ulrica Ambjörn, consultant
These “awards” can be compared to Wikileaks’ awards during the past few years
These include (but are not limited to):
Australia’s Walkely for Outstanding contribution to Journalism (2011)
Sam Adams Associates for Integrity in Intelligence (2010)
Amnesty International’s media award 2009,
Economist’s Freedom of Expression Award (2008)


The awards to Julian Assange and Wikileaks are from fully independent organisations and are far more substantial than awards for marketing or an in-club patting themselves on the back.
It is clear that Expressen has once again put its spin on its “news” to put itself in a better light. Expression should be ashamed, but the above examples indicate that this tabloid has no shame. Expressen, we’re not impressed.

Posted by Marcello Ferrada de Noli (Italy) at 12:29 am