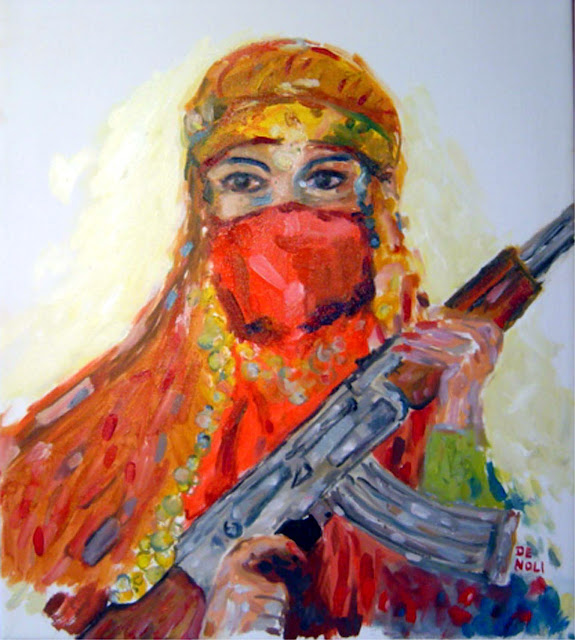 While I was quoting here declarations of the former Press Secretary of Swedish Royal House, I remembered this portrait I have done 2002 inspired in the Swedish Queen's interesting eyes. The portrait was shown during my Art exhibition at the Chilean Embassy in Stockholm, April 2004


As a new belligerent attacks in the Swedish mainstream media were fired today from Stockholm against WikiLeaks founder and editor Julian Assange, Professors blog debated with Expressen’s editor-in-chief Thomas Mattsson in the  program “Online” at RadioEtt. Also participating in such panel was Donald Boström – a known Swedish filmmaker and author of a documentary on Julian Assange. The program was recorded today 29 February, to be aired first this Saturday.
By Marcelo Ferrada-Noli
Thomas Mattsson and Donald Boström were at the Radio1 show in Stockholm, while I made my intervention - a bid too near my way to Italy, from Skåne, through a telephone link. The recording session have had an involuntary one hour delay. I did not answer to direct questions by either Expressen’s Mattsson or Boström, but instead given space by the Program leader Gabriella Lahti to directly replicate some of Thomas Mattsson’s notions as expressed in the program after I received the call.  In other words, as the show was not  sending live, I never had the possibility to listen what Mattsson and Boström would have said before I was linked to the studio, if so was the case. The show “Online” is aired every Saturday and Sunday at 2300-2400 on radio ett 101,9FM. (It is possible to stream the show directly from www.radio1.se)
I however recorded my interventions in video, which I partly transcript here below. (More transcripts to be published following suite, at arrival in Italy).
The program leader Gabriella Lahti presented me in the show as Professor of Public Health Sciences and publisher of Professors blogg.
I said among other :
I
“I wish to state that the information nowadays spread by the Swedish media – on that WikiLeaks has prepared a certain campaign against Sweden – is absolutely groundless. WikiLeaks has strongly denied this; (further), this was even said directly by Julian Assange in London to one of Expressen’s journalists: that the story was totally made-up by Expressen”.
“The one and only campaign here is -  unquestionably – the one the Swedish media have initiated these days against WikiLeaks and particularly against the person of Julian Assange."
"And the question is Why (Is this why?); and I think that such campaign has mainly to do with a manipulation of the Swedish people’s opinion with regard to the extradition issue of Julian Assange to the USA”. [1]
I also developed on the timing for such anti-Assange campaign by Expressen and the other media that followed suite. And that this is implemented as we hear the news, published also by Expressen today, on that an indictment has been secretly prepared in the US against Julian Assange. This, beyond doubt, I said, means US will seek the extradition of Assange from Sweden. And if the Swedish government grant such petitions it will most certain a very unpopular decision: the Swedish media is preparing the public opinion for that contingency. I said also that Profesor Blogg have anticipated on such events already in November 2011 ( Shall Sweden grant to US the extradition of Julian Assange? ).
II
About the issue of the “sources” Expressen maintains they have, regarding the “inside information on WL plans against Sweden”: I stated, that source (from inside WL) simply does not exist, and I challenged Editor-in-Chief Thomas Mattsson to show details of the alleged (kind of) source, PM, or document they are referring to.
I also said that I was not alone in this mistrust about the issue of Expressen’s “sources” and reminded in the panel of the following declarations of Elisabeth Tarras-Wahlberg – the former press secretary to the Swedish Royal House – “which I read yesterday in the Local” (I mean I read yesterday in Twitter, where those declaration were referred to The Local article of Dec 2005): [2]
“The newspaper has incorporated sensation and scandal into its system as a way of earning money.”
“It is more the rule than the exception that they rely on so-called reliable sources. Sources that sometimes only exist in the reporter’s head, or that when they maybe do exist, are obviously unreliable”. [2]
III
Then comes a series of meaning exchange about different concepts. Thomas Mattsson developed on his thesis about WL supporters being largely conspiracy-minded. I had another view of ”conspiracy” than Mattsson manifested. I meant “conspiracy” is also related to the agreements than in secret those in power exercised against the interest of the people. I was referring to suche ”conspiracies” that have been precisely the target of Wikileaks.
With the above I had concretely the following in mind (although I had not the opportunity for referring to it in the panel):

IV
Expressen’s chef Thomas Mattsson intended to draw support from my reasoning about the role of Expressen and the Swedish media following them in this anti-WL campaign, to demonstrate how “conspiracy” minded WL supporter’s’ writings are, implying that is not like fact-based, etc. as in the media.
I referred to that in my final rebuttal and said, rhetorically, referring to Expressen's WL/Assange series,
“Just in one article, just in one only analysis published in Professors blog, are referred more facts than in all five articles together published by Expressen in these last days”.
Notes:
[1] Först vill jag hävda at uppgifterna som cirkulerar nu i den svenska media, om att WL har förberett en viss kampanj mot Sverige, är helt grundlösa. WL har dementerat detta i mest absoluta termer. Det sade Assange själv till en av Expressens journalister häromdagen vid en presskonferens i London: att storyn är helt fabricerat.
Den enda kampanj här är uppenbarligen den som den svenska media har inledd i dagarna gentemot WL och i synnerhet Julian Assange som person. Och frågan är varför, och jag tycker att den kampanjen mest har göra med en bearbetning gentemot den svenska opinionen avseende överlämningen av Assange till USA.
[2] The whole passage quoted from The Local (23 Dec 2005) reads:
“Elisabeth Tarras-Wahlberg, the former press secretary to the king, and now in charge of the households of the young prince and princesses, wrote in Dagens Nyheter on Friday that the faults in Persbrandt’s case were not just a one-off for Expressen, as Sjöberg [from Expressen] had said,
- The newspaper [Expressen] has incorporated sensation and scandal into its system as a way of earning money.”
-  It is more the rule than the exception that they rely on so-called reliable sources. Sources that sometimes only exist in the reporter’s head, or that when they maybe do exist, are obviously unreliable,” the royal retainer claimed.”
This is what I quoted in the program Radio1 On-Line:
"Det är mer regel än undantag Expressen uppges vara beroende av så kallade tillförlitliga källor. Källor som ibland bara finns i reporterns huvud, eller att när de kanske existerar, är naturligtvis otillförlitliga".
Update 4 March: Here it is 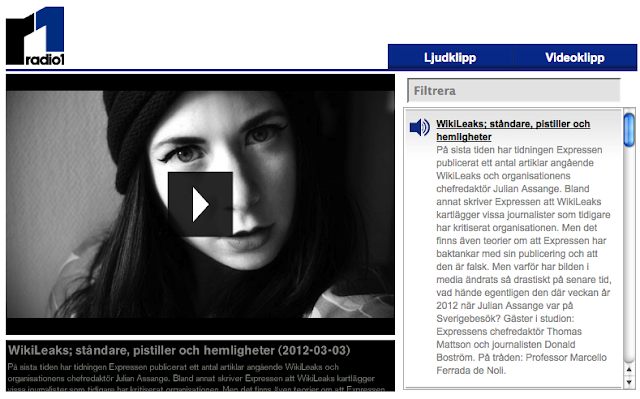