I start here the series on the historical and political background of Sweden in the context of the extradition of Julian Assange nominally petitioned by this country. In fact this event is only one piece, although vital, in the offensive to destroy Wikileaks. The series continue with the analysis "Facts contradict falsehoods in the Guardian and in Swedish media after extradition verdict".

At the contrary of common belief, or what uninformed journalists have reported, Sweden is not a “neutral” country, geopolitically or militarily. Neither is the Swedish mainstream media, which is assigned to protect Swedish international interests. This is central to keep in mind about coming events in Sweden for Julian Assange.

Analysis
by Marcello Ferrada-Noli, from Stockholm
Although the reasons explaining the international offensive aimed at the destruction of Wikileaks are, if not obvious, easy to understand (enough with analysing the vast impact of Wikileaks in the uprisings in Northern Africa, the metropolitan Occupy-actions, or as catalysis of the new emergent multicultural anti-war movement), the strategy of such contra offensive is complex and multidimensional. A variety of governments had to synchronise their resources to ultimately obtain the silence of Wikileaks. The smear campaign against Assange is one, but a vital piece in such strategy.
The protracted character [2] of the “legal” process initiated in Sweden against the Wikileaks founder - which is till is deprived of any charge – has served both as “attrition war” against Wikileaks as organization, and it had given time to prepare the legal case against Bradley Manning, now in the eve of a pretrial hearing.
Sweden, a devoted NATO vassal-country (is not "officially" in the alliance) is only one of the factors intervening in this operation.  And analysing the elements intervening inside Sweden, we find again a complex variety of forces.  The official stand of the government (in the context of its international policy and alliances) is only one of those elements. The powerful radical-feminist movement, with its own agenda, is another. This movement has openly declared they are using the Assange case as a “symbol” [3] for the political advancing of their own ideological positions. Namely, the further radicalization of the rape-legislation.
The mainstream media, and its own reasons to react against the potent competitive publishing/journalistic role of Wikileaks is yet another factor. In this last case, aggravated by the acute concentration of ownership that characterizes the media in Sweden.
In refuting erroneous stream media dispatches insisting in Sweden’s “only legal” stand in the Assange issue – I will prove anew that Sweden’s position in the case Assange is both politically motivated and politically implemented, particularly in the international domain.
The myth of Sweden’s neutrality 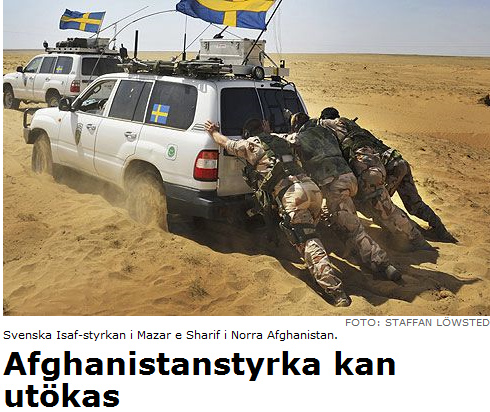 Picture above: Swedish troops in the NATO-commanded military occupation of Afghanistan already in 2005. The legend (in Swedish) says, "Swedish forces in Afghanistan can increase". And they certainly did! The troops still are there.

In the possible upcoming of a trial of Assange in Sweden, the world will again focus on Sweden and its juridical institutions, international alliances and allegiances. This is why mainstream journalists are already assigned to cover according to the “Swedish view”. It is a well-known fact that Swedish media traditionally covers Swedish international disputes by plainly repeating the official line without further question it.
Because of political reasons I have already explained (for instance, in "This is Why"), official Sweden has declared Assange and Wikileaks a national enemy.
One main argument used by some Anglo-Saxon journalists focused on Sweden’s campaign against Assange and Wikileaks is the notion of a pacific Sweden who is modern and above all neutral. An independent and neutral country such us Sweden would never run cases on behalf of superpower USA, it is suggested. For instance, Clarie Harvey article on the case Assange in the Daily Telegraph bases that assumption in that that Sweden is a “proudly independent nation that remained neutral even during World War II”.
Using also some material of my previous analyses published in these columns [4] [5], I examine here anew the facts about Swedish neutrality in World War II and in current times: 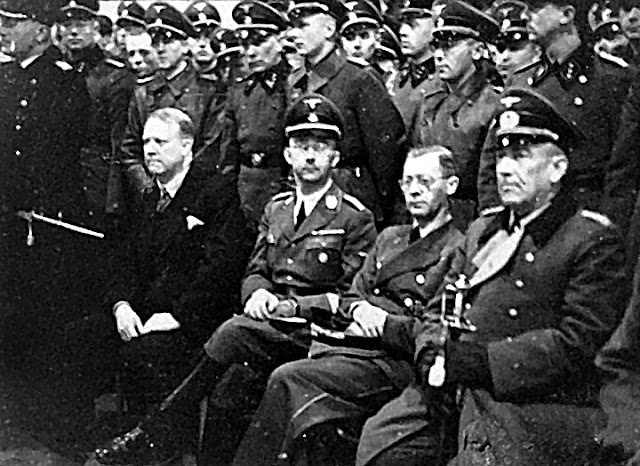 Himmler in Oslo
The World War II issue
Sweden was NOT that neutral during World War II. In actual fact, Sweden had a secret agreement with Nazi Germany which permitted all along the transit of German troops through Sweden in their way to occupied Norway.
Prominent members of the Swedish establishment were Nazi or pro-Nazi.  Sweden sold to Germany the iron that held the weaponry manufacture in Nazi Germany on-going.
The discussion around a Swedish involvement with the Nazis or their ideology is like never ending. One day could be on the solid racist research conducted by that time in Uppsala University, another  on the compulsory sterilization (see "tvångssterilisering") that prevailed in Sweden until recent decades. Today is about Swedish politicians and doctors stand on euthanasia. In these very days the Swedish media has been reporting alleged commercial doings of the current Swedish queen's father, "Walter Sommerlath, a German Nazi Party member" who  "made a fortune from a factory seized from Jewish owners in Nazi Germany". 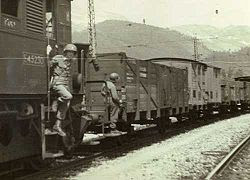 http://www.forsvarsmakten.se/sv/Internationella-insatser/Medaljer/
"NATO MEDALJER. Nato-stadgans artikel 5 är kärnan i försvarsalliansen Nato. Den innebär ömsesidiga försvarsförpliktelser för medlemsländerna i Nato.
Insatserna i Kosovo (Kfor) och i Afghanistan (Isaf) är så kallade ”non article 5” insatser (icke-artikel-5-operation). Det vill säga det är Nato-ledda operationer under ett FN-mandat.
När man som svensk soldat tjänstgjort minst 30 dagar i en icke-artikel-5-operation i Natos regi så får man en särskild medalj för det."
2. “Operation Deferment”
"The attrition war posed by the long lasting “legal process” initiated by Sweden against Wikileaks front-figure Julian Assange, have contributed with seemingly “artificial delays” to the tactical aim of exhausting Wikileaks in resources and manpower. For one thing is to acknowledge that legal appeal procedures do take their due time. But another is to explain why so different dates or delays, have been consecutively announced for such verdicts, or why, from the part of Sweden, it has been neglected a sooner interrogation of Assange (in London or by other means). This “Operation Procrastination” would also explain why the technical possibilities for the interrogation of Assange while he was in Sweden’s soil were not explored in fully by the local prosecutors. Could this apparently synchronized strategy of procrastinating several steps in the "legal" procedures against Julian Assange (further appeals are expected) aimed ultimately to strangle Wikileaks also economically and organization wise? And vice versa, to which extent the weakening or designed abating of Wikileaks through decimation of material resources was meant to the waning of Julian Assange international support? To this add the highly belligerent front 'Trial by the media' exercised in Sweden ad hominem against the Wikileals founder." From M Ferrada-Noli "Bildt och Clinton i konferens inför beslut om Assanges utlämning".  Published in Second-Opinion, 1 November 2011
3. M Ferrada-Noli, "Julian Assange declared symbolic issue by Swedish radical-feminists", Professors blogg, 30 September 2011
4. M Ferrada-Noli, "Does Sweden Inflict Trial by Media against Assange?", Professors blogg, 20 February 2010
5. M Ferrada-Noli, "Sweden’s phony prosecution against Assange is POLITICAL and IDEOLOGICAL", Professors blogg, 20 December 2010