Reflecting on the political extraditions of history libertarian-heroes


To tell the truth about government makes persons "activists" in the eyes of the authority. To bring the truth to the streets of the nation makes the activist "dangerous". But to disclose the secrets of governments about the deception to their people in front the whole world, makes the honest fighter a "criminal", by edict of the exposed ones.

“It is dangerous to be right in matters
on which those in government are mistaken” - Voltaire
(François-Marie Arouet Voltaire was subject to extradition trial
in the Free City of Frankfurt, as requested by the Prussian
authority instigated by two “offended” militant Christian women,
Madame de Pompadour and Empress Marie Therese). [1]

Very many among such people's heroes shared also the libertarian philosophy of agnostic atheism, such as Voltaire [left painting], Abraham Lincoln, Galileo Galilei, Giordano Bruno, Che, Emma Goldman, Bertrand Russell, or Miguel Enríquez.  Many of them were also executed while taking arms against ruthless dictatorships, while ethically obeying the natural duty to rebellion against tyrannical rule.

Many of them were also heavily tortured – physically and psychologically - before to hear the sentence from docile courts. Guido Fawkes, after the London verdict of London in 1606, died to avoid a macabre after-execution by jumping from the gallows while being taken up the ladder to the execution rope, and jumping him self to death on the pavement of the Old Palace Yard at Westminster.

Who among the public ever mentions in these days the name of the judges that read the sentence, or the attorney that asked his “genitals would be cut off and burnt before their eyes, and bowels and hearts removed . . . then be decapitated, and the dismembered parts (of his body) displayed so that they might become prey for the fowls of the air”? [2] Who would ever remember the name of Guido “Guy” Fawkes’ appointed hangman? How many can instantaneously remember the name of the English monarch that ruled Fawkes fate?

Guido Fawkes is celebrated around the 5th of November. He had a strong anti-church sentiment, which would partly explain the characteristic pagan elements survived in the festivities from earlier medieval times. Some traditions have made afterwards Fawkes a symbol for the "Protestants" vs. "Catholics" issue. This in my opinion could very well be mistaken, as that notion does not take into account the reality-context in which Fawkes and many other anti-authoritarian fighters of the epoch operated, the people's mentalities they had to deal with, or the ideological tactics they gad to use. Their struggle against political despotic rule had to began with the harsh questioning of "divine" transference of absolutist power-fashion as administrated away by the Pope. This is why the protest is known in the main, as anti-Pope stand when in fact was an anti-sovereign stand. Religions issues were secondary. Sadly, it would not be the first example that this kind of distortions have been well carried away by institutionalized Church.


For instance, Siddhartha Gautama - most known as the wisdom man, or Buddha -  was not a "modest" person from the ranks. He was a Prince, and belonged to the noble family Sakyas. He rebelled against the theocracy in India, and he was absolutely atheist. However, after his death and as result of his immense popularity, he started to be worshiped by his followers, as he himself was a God. He is considered the "founder" of Hinduism. In fact, Hinduism is the compromise faith resulted from the rebellious teachings of "Buddha" and the remnants of Brahmanism, the religion which Siddhartha had managed to pretty much destroy under his life-time. Also, "Brahmanism" is not the religion of a "God" as such. The name comes from the high priests forming the cupola of the theocratic government, the Brahmans, which dictated catechism according to their absolute political interests. Beyond any doubt, Siddhartha was a political revolucionario, not a religious figure.

And I would apply the same to the legendary Guido Fawkes.

And who remembers the name of the foreign ministers that handled the extraditions of  Voltaire at the Free City of Frankfurt after he had left Postdam, assumed with the knowledge of  Great Fredrik police, which never stopped him there?

In each of those “qualitative jumps” as the orthodox historical materialists would put it in explaining the different epochs in society, the cultural heirs (we, the public of nowadays) can easily identify the anti-establishment heroes, the antiheroes of mankind. Those who made history not only advance but to progress, in humanity-meaning.

Libertarians remember as well that to each oppressive government of the past corresponded a “spiritual” superstructure of greedy priests, corrupted popes, professional Temple-merchants, which indulged unreservedly in mass-alienating the people with their deceiving people's opium. It was the retribution to pay to the political rulers in order to keep their own ecclesiastic privileges. The symbiosis of power which gave origin to the increasing concentration of power and wealth for the selected - as in nowadays - it was never between soul and flesh, or heaven's and secular thrones, as religion proclaim. It was just between dirty privileges in one part and even dirtier in the other one, and vice versa. There we have the dialectical spiral.

The Church encyclical and solemn-delivered manipulations gave the political oppressed the notion of Hell in connection to rebellion. The word sin associated with joy, particularly the joy of freedom, particularly the freedom of thinking and manifesting those thoughts.

No one will remember tyrannies' judges or rendition executioners. Only heroes will be remembered 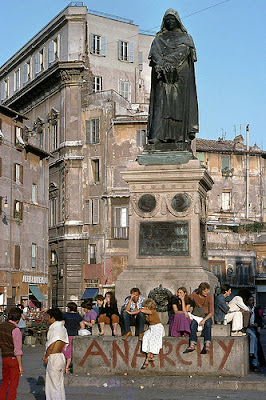 Every epoch in history essays it own model for survival. From the old theocratic rule based in slavery, Feudalism gave resurrection to the one-God inspired absolute monarchy and the despotic aristocrats’ law, which ended elsewhere in colonialism.  Medieval political doctrines of civil oppression derived its right from God, and the omnipotent notion of God from the infinite dogma that they say to rule over a tiny limited geocentric system.

The iconoclasts of the time, such as Giordano Bruno, or Galileo Galiei or Copernicus, focused accordingly in questioning the authority concepts of infinitum respective geocentric astronomy.

Giordano Bruno burned to death by edict of the Inquisition tribunals in 1600. There, in the very same spot of the pyre, there is a huge statue for him in Campo dei Fiori. During the 68’s and early 70’s movement we use to honour some small guerrilla victories to his memory, pouring over our wounds the gratifying tales of past struggles. Nobody reflected about the name of the judges, or of the president of the Inquisition tribunal. Hardly on the pope himself, considering that we were after all in Rome.

Feudal rule of oppression, not for asphyxiating civil liberties but fundamentally because opposing free-enterprise economic development  (read, voracious capitalism), gave birth in bloody delivery to the modern independent capitalist states, that also become the heirs of Ultramar colonies and their new profiteers.

That struggle gave us Lincoln, and later Malatesta. And humanity will remember Lincoln, who said “"The Bible is not my book nor Christianity my profession. I could never give assent to the long, complicated statements of Christian dogma." 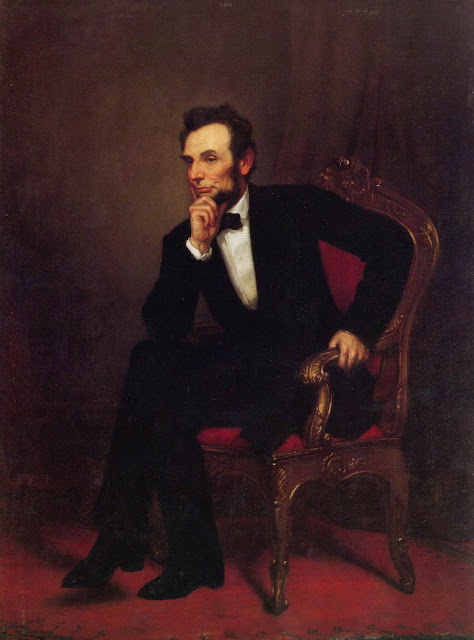 Human history is long. Halloween eve is brief. I state my point:

When modern times “democratic” oppression consists in the deception towards the citizens that have elected them, for instance in their lying about the real causes of war.

When in these pecuniary-greed based economies, the banks – like for instance all Swedish banks – become richer and richer, and our government try to convince that the "financial crisis" is because our politically incorrect savings, shopping or investments habits. Another horrible fraud.

When wars of usurpation take away the bread and the dream for a life without misery, and cluster bombs take  the mothers and fathers from their children, or take their children away; and take the oil from the underdeveloped soil to lubricate the (wrong) developing of wealthy nations.  When the street populations of Africa or the Middle East are forced to spill their blood for the chimer of a new order. When politicians and rulers, and popes, and the journalists that cover them up, and all of that fascist cohort of intellectual serves or "order-enforcing" lackeys guard only the aggressors order, protect  the macabre orgy in which the hyper-rich trade the destiny of those hyper-miserable for a bunch of stockholders in Stockholm, London or Wall Street.

When such human-made plagues smashes the face of each decent person in this world, then it has come the time for the new antiheroes. Just for this epoch of mass deceiving, the answer for this epoch is transparency.


To tell the truth about government makes persons "activists" in the eyes of the authority. To bring the truth to the streets of the nation makes the activist "dangerous". But to disclose the secrets of governments about the deception to their people in front the whole world, makes the honest fighter a "criminal", by edict of the exposed ones.

Voltaire put it masterly, "It is indeed dangerous to be right in such matters those in power are wrong". He was himself persecuted with arresting orders and extradition warrants. Journalists of the epoch took also the side of the oppressor.  Voltaire showed the road: The juridical extraditions that are politically motivated must to be fought with political means.

Christopher L. Blaskesley , author of "The Practice of Extradition from Antiquity to Modern France and the United States: A Brief History", tell us in his very scholarly conclusions what is behind such extraditions:

"The law of extradition evolved from the need or the desire to obtain custody over individuals deemed dangerous to the social cell. This could follow from the perception that an affront to the gods or to the leader's authority had to be avenged. Such a perception arose when the leader was challenged in his authority, as in a directly "political" offense, or when the leader's authority was undermined because of some' 'wrong"committed within the scope of his "sovereignty." [1] 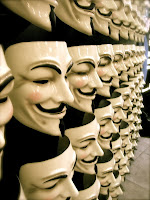 Very many decent souls are thinking these days in the “pagan”, politically incorrect heroes.  Those that dared to oppose the Gods, starting with Prometheus, followed by dearest philosopher Diogenes and so many others that give them company in “Hares”.

I will be proud to joint them.


[1] Christopher L. Blaskesley,  The Practice of Extradition from Antiquity to Modern France and the United States: A Brief History. Boston College International and Comparative Law Review, Vol 4, Issue I, Article 3. ("Conclusions I" in page 56)
m
[2] Antonia Fraser, Faith and Treason. The Story of the Gunpowder Plot. Anchor Books, NY, 1996. (This quote in page 195)

m
m
m
Other articles in the Professors blogg on the Swedish case against Wikileaks founder Julian Assange:
o

A list with 150 analyses and articles in the Professsors blogg on the Swedish case against Assange:

·     11 June 2012. The Media, The Man & The Misinformation: Swedish Media War Against Assange Intensifies
9June 2012. At Supreme Court Hearing, A Silent Protest from ProfessorsBlogg

Thanks for a great read.

The way I see it.

If you are the elite, the government or similar you are immune to the law, you can murder(assassinate), commit war crimes (maybe in Apache helicopters), and torture (enhanced interrogation) anybody you please - this includes genocide depending on how you chose to count the deaths, if you chose to count them at all.

If you a normal person you can be arrested for peaceful protest (occupy movement), killed (with no fair trial, e.g. Anwar al-Awlaki) or suffer undue and harsh punishment, including torture-esque practices (Bradley Manning)

And if you are trying to make the world better and empower the common folk (Wikileaks, Assange) then you are totally stuffed.