By Prof. Marcello Ferrada-Noli
“To rig means 1. arrange the outcome of by means of deceit
2. manipulate in a fraudulent manner”
CONTENTS:
Part I
Introduction: A. Who is really the one causing the discredit of the Swedish state and the Swedish legal-system? B. Background hypotheses, C. Aims, D. Ethical  issues. Going through the documentary’s political agenda. The Dirty tricks: a) “Assange is the cause”: Manipulating Jan Gillou’s statement, b) What international research has ever concluded that the Swedish system of justice is “the best and fairest in the world”?, c) “Assange is a skilful manipulator”. Translating equivocally to make the passage fit with the documentary thesis: Manipulating Daniel Domscheit-Berg’s statement, d) The blunt lie about Julian Assange leaving Sweden right after the accusations, e) Deceitful omissions: The case of Naomi Wolf. APPENDIX A.


Part II “Men that hate women”: a) That women in Sweden are discriminated and even scorned by men in the “data branch”: But only male immigrants are shown, b) A psycho-social rationale for the populist chauvinist card.

Part III "Men are animals": a) A few words on the genesis of Swedish state-feminism. b) The gender war. c) That women in Sweden are scorned in the Internet for being women. The hidden agenda of the Pirate Party d) That the Swedish women - "such as AA & SW" - that "have been victim of rape" are harassed and discredited by men in the Internet. “Victim” Claes Borgström. Part IV a) That Swedish women responded spontaneously with a grass root movement, a “mass-movement” prata om det (talk about). Part V Tales of Swedish unfairness: a) Where is Björn Hurtig? b) Where is Jennifer Robinson? c)  Where is the truth? Conclusion: The Swedish Television documentary that got the world’s opinion to question Sweden cultural-health status.

Part II “Men that hate women”
Also embedded in the anti-Assange campaign, this documentary is a manifestation of the notorious Swedish theme about "men who hate women". However, in contrast to the Swedish film with the same name, based on the book by Stieg Larsson, the documentary makers present the theme spiked with unmistakably racist and populist ingredients.
In order to establish the tenet of a male sexual hostility towards women generated by rape suspect Julian Assange (so have the accusers been referred elsewhere by their lawyer, the fundamentalist feminist Claes Borgström) the documentary develops specifically in the following general directions, most of them plain lies, however presented as if 'factual': that Swedish women a) are discriminated against and even scorned by men in the "IT industry"; b) are scorned on the Internet for being women; c) who are "victims" of rape, such as those accusing Assange, are harassed and discredited by men on the Internet; and d) then responded spontaneously with a "grassroots"movement - a "mass movement" even - called "prata om det" (talk about it). I will examine item by item.
a) Swedish women are discriminated and even scorned by men in the IT industry - but only male immigrants are shown
To support this first claim, the documentary makers cite the opinion of Peter Sunde, former spokesperson of the well known The Pirate Bay. He is used in the documentary to speak on gender issues in the Swedish IT industry. Sunde affirms that women are not at all welcome by men in the media industry and says that's "unpleasant". And he repeats the same statement over and over. He also offers a few negative comments
on subject of Assange as an "idol", apparently a requirement in every comment by Swedish males on Assange in a "gender perspective".
However, the documentary makers sustain Sunde's repeated message of women unpleasantly discriminated by men in the IT industry by accompanying it with a single film clip of dark-skinned "Muslim" immigrants gathered in what it looks as a public  computer room or lab. 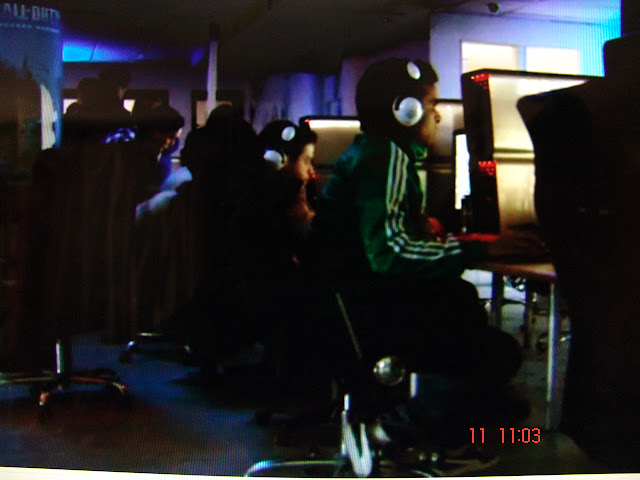 This is sheer racism and further aggravates by ascribing to immigrants a presumptive hate towards Swedish women. How will Swedish organizations for immigrants and political refugees react? Are those SvT documentary makers unaware that they're offending and abusing a demographic of the population representing over one million residents or 11 percent of the total population of Sweden? Have the fundamentalist feminists at SvT never heard of the Swedish law prohibiting "incitement to hatred"?
A psycho-social rationale for the populist chauvinist card
Sweden is indeed under heavy criticism for what they have done in this process and the way they treated both the legal aspects of the case and Assange as a person, with regard to his human rights in Sweden. In this regard, the documentary does not at all mention that the Ambassador of Australia to Sweden had conveyed a letter about his government's concern for the human-rights of Australian citizen Julian
Assange.
Let's return to the explicit goal of the documentary, what is mentioned in the SVT ad, in the documentary's introduction, and further in the development and comments of the interviewers statements:
A. "How could WikiLeaks founder Julian Assange get the world to question Sweden's credibility"?
B. "Who would have thought this man would manipulate world opinion to question Sweden and the Swedish system of justice?"
C. "And even Sweden's heroic fame as the world's fairest and most judicially safe country has been dealt a blow."
The goals are unequivocal: Julian Assange must take the blame for the wrongdoings of the Swedish system and the fascist excesses of Swedish fundamentalist feminism.
As I have already written on this, allow me a brief summary on this point:
The system is cracking away, Made in Sweden severely questioned, big business in jeopardy. Ensuing, the strategists of the Swedish Psychological Warfare command are forced to issue a new social-psychological trick: The blame of the entire international
prestige-losses of Sweden are to be put on Julian Assange. And just to maximize effectiveness with one shot; it should state "the founder of WikiLeaks Julian Assange", so supreme strategic mentor USA will also get a bit of what they have asked for to their marionette Swedish politicians and journalists: the destruction of WikiLeaks.
According to the book, the social-psychological methodology must first conduct an inventory of the available political resources. Political resources in terms of psychological warfare are not foremost the political parties and their members but the collective constituencies a country is able to mobilize at a given critical moment. Here the message is formulated in nationalistic terms. The point of departure is the study of political opinions, not mere quantitatively as conducted in traditional political analyses such as poll estimations and the like. The point is not to assess how many supporters this or that party has. The point is instead to assess the tendency in the development of ideological attitudes of the population with reference to the national interest that are mobilized in a particular crisis.
In Sweden an obvious tendency is to assess the increasing anti-immigrant sentiment by means of the quantitative advances of the new emergent Sweden Democratic Party (Sverigedemokraterna, SD). The phenomenon might be a product of mainly the following aspects, a) partly the social impoverishment of the Swedish population as a whole as a result of the financial crisis that produces a sentiment of caution about an uncertain future (a classical variable), b) the political development of the other organizations which, in trying to increase or regain supporters, also present a "competitive" populist agenda in immigrant-related issues, and c) the problem is also rooted in a highly debated immigration-policy sustained in Sweden in the last decades, and whose results did not correspond to the "spirit" of such legislation, originally aimed to provide shelter to veritable political refugees.

With this said, a notion to prevail in those circles is that new immigrant waves might have grown in such volume which  social instruments of the Swedish society cannot adequately cope with. In fact, this aspect should be also treated with a discussion on the notably diminishing  of the social-welfare  capabilities traditionally implemented in Sweden. This last phenomenon simply correspond to the drastic right-wing turn of the important Social Democratic Party during the Göran Person era, and its replacement in government by the frank right-wing coalition currently in power.
The playing of the immigrant card by Swedish institutions, like here in which the Swedish National Television attempts to establish an association between enemies of the Swedish State / Swedish system of justice and foreign-born immigrants has been, in merit of the above, a recurring and "expected" trend in Swedish governments and their political parties in the post-Palme era.
But what was not expected were the cynical, fraudulent, and ungrounded associations that the state-owned Swedish National Television - which certainly well analyzed the documentary before approving its release - allow the documentary makers to create between "men who hate women" (Anna Troberg) or "men who discriminate against women" (Peter Sunde)" and foreign-born immigrants with darker skin. The association is made through the presentation of a supportive graphic material whose composition, theme, human characteristics, settings, etc.  have been  selected by the documentary 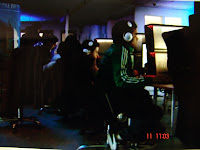 makers among hundreds others materials available, or they have photographed it themselves. The fact is that they did chose as the one and only graphic material in sustaining Sunde's opinion on men discriminating Swedish women just the depicting of a dark-skinned man in the front plane and others of similar look in the surround.
This is very aggravating behaviour on the part of SvT, and it will further embarrass the international reputation of Sweden. And this is an extremely flawed strategy by the country's opportunistic fundamentalist feminists and the politicians who support them. They believe we're still in the unsophisticated 'Le Pen era' of stirring chauvinist sentiments through bigotry. They have missed the Obama phenomenon, they have not considered the current massive revolutions in the Arab world and the successes of the true feminists there. They still believe that a couple of quasi-subliminal or subconscious tricks with racist content can do work. They are so mistaken.

If the Swedish National Television and the fundamentalist-feminist politicians that prevail in programs like the documentary here commented wishes to discuss the "immigrant-problem",  fine! But do it in the open, not hidden behind cheap, social-psychological dirty-trick techniques.

Part III "Men are animals": a) A few words on the genesis of Swedish state-feminism. b) The gender war. c) That women in Sweden are scorned in the Internet for being women. The hidden agenda of the Pirate Party d) That the Swedish women - "such as AA & SW" - that "have been victim of rape" are harassed and discredited by men in the Internet. “Victim” Claes Borgström.
Here to Part III

Other articles in Professors blogg on the Swedish case against Assange
·