The Pirate Party should stand for their values. They should struggle for Assange and Wikileaks

The Pirate Party should stand for their values. They should struggle for Assange and Wikileaks:

Transparency in international politics is what the WikiLeaks project is all about: An international mega-weapon to secure transparency and arm peace soldiers for the noble combat aimed to decimate the belligerent, profit-avid corporative power behind the bloodiest conflicts of this world. It is highly the time that the Swedish Pirate Party, self-portrayed as a Transparency advocate, take stand on the issue of Swedish foreign policy and publicly manifest its political opposition to the arrest without charges of world's main spokesman of such transparency.

I found today in my box a new and very enticing reflection about the Swedish Pirate Party (PP, for brevity) sent to me by reader Thomas Tvivlaren. He had a new comment related to my old post Piratpartiet och Don Quixote. I have here a further reflection on Thomas Tvivlaren’s formulation. I also - further in the post - argue on the level of understanding demonstrated by PP about the Swedish case against Julian Assange and the organization associated with him, WikiLeaks.
Effects do have causes
Among other, Thomas Tvivlaren tells in his comment that Swedish Pirate Party ranks encounter almost invariably this replication in the Swedish political forum, whenever they take up their PP’s core issues (e.g. free knowledge, integrity, etc):

The core of the matter, what the Swedish Pirate Party (PP) seems not to have fully realized, is that in real life, in the real political phenomenon, “I” or “K” variables are determined precisely by the “X” factors about which PP is apparently not interested in having a position, or in case they would have such position, not interested in manifest such standpoints publicly.
And, the most important, as a consequence of not having an stance on the issue “X”, much less would PP have a concrete policy of action in order to have an influence in the political course of factor “X” which is the one primarily causing the negative phenomena in “I” or “K” (PP’s core ideological query). 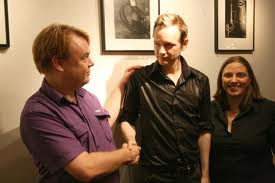 Old days, when Julian Assange was popular in Sweden


Of course that the above would rise, in the long run, questions as to how “seriously” the POLITICAL presence of the Pirate Party can be argued.
For one thing is to be a political party and another thing is to be an OPINION movement (or an agitating organization); which at the end is what the Pirate Party would be known in Sweden unless decides to change its appraisal of the situation.

At the end, the political survival of a political organization can be reduced to the same principles regulating the coping strategies in humans, animals, even in vegetables or microorganisms. Either we somehow get insight of the reality posed to us as problem, and try to change that reality, or after getting an adequate insight of our real capabilities try to adapt.
My idea is that PP should essay both.
For a Swedish neutrality to prevail
The above model of X determines I it was just an illustration. But it is not at all an abstract-abstract illustration. It refers also to a principal political issue that PP has to deal with, and soon:
As long as PP does not promote actively, fights actively, and distinctly takes a position for NEUTRALITY in the Swedish foreign policy, PP can be held of doing NOTHING to get rid of the CAUSE of one of the main problems which its narrow agenda – even if composed by such important issues – is currently dealing with.
A sovereign and independent Sweden would never indulge in secret agreements with a foreign power to “sale” sensitive data on their citizens.
Besides, the advocating for neutrality in international policy would fit perfectly with the internationalist character of the PP’s message, at least as many of us have understood, or wish to understand it is all about.
I wish to make clear that the question here is hardly the failure of a PP chairman in meeting the constructive libertarian ideas I wished to convey.
The question is the potential failure of PP in seizing the gold opportunity that  might still have; the possibility of leading and understanding an emergent force represented by the most modern and valiant cohort among the dissent Swedish youth.
They are technologically advanced, and thus updated observers of the political-reality’s full puzzle, not only of the one or two pieces, of the one or two issues separated from its context. They know better.
Like amphibious born to win, they can travel from virtual seas to a solid reality and come back vice versa to process, design, and execute.
In sum, they already know that that society’s political problems – the “issues” - cannot possibly be understood separated from each other, and thus neither can the solution for those problems be found in a filtering of selected core queries.
Not to mention that in this “globalizated” era all main political problems have a strong international phenomenology; they should be addressed internationally and its causes attacked sans frontiers. To have and stand on international affairs and foreign policy is an absolute and self evident must.
And precisely, international politics is what the WikiLeaks project is all about: An international mega-weapon to secure transparency and arm peace soldiers for the noble combat aimed to decimate the belligerent, profit-avid corporative power behind the bloodiest conflicts of this world.
The Swedish Pirate Party has to soon engage their selves in the understanding as to how becoming an INFLUENT member of the POLITICAL constellation of Swedish parties, and internationally.
Their poor engagement about the Swedish case Assange and WikiLeaks has to be corrected, not only because is unfair to the ideological principles announced by PP themselves, but also because it would wrongly send the picture of a political opportunism, of a PP trying the easy way of “Swedish consensus” together with bigger and more influential political parties.
I wrote recently on the hypocrite dichotomy that some political columns or bloggers, or even some political leaders do in Sweden between “the man” and “the project”, “the legal case” and the “ideological case”?
I wish to direct this message straight to the appraisal of PP women and men, and particularly PP’s creative youth:
“What ultimately it is behind the flagrant injustice in the case against Assange IS ideology. It is the ideology of power abuse, of those governing by the rule of neglecting the integrity of their citizens, seizing their human right to free will and transparent democracy. It is the revenge of the state against the libertarian judging THEIR wrong-doing.”
Assange IS Wikileaks
Assange IS Wikileaks not by his personal decision but by edict of the powers which wants to destroy the one and only successful struggle for democratic transparency of the last decades. They have designed that by discrediting Julian Assange they will finally discredit the entirely WikiLeaks project which was founded by him.
For every single person in the world that have ever heard of Wikileaks associates it with Assange and every single person in the world that have heard of Assange associates him with Wikileaks. I repeat this in purpose, as the truth of this statement does not seem to pass through the understanding of some consensus-pro leaders at the Swedish Pirate Party.
The potential of PP, its remarkable unique political value, is instead in the opposite: The prospective to be a firm and radical opponent of precisely that opportunistic tradition, to show a new way in the political corridors, but above all, all along in the ample and beautiful avenues of the Swedish cities.
It is the time to take the mobilization from the computer to the demonstration square, the time to populate the streets with this loud, hard-hitting flying message:
FREE ASSANGE NOW!
Marcello Ferrada-Noli

Very nice post Marcello! I especially like the problem analysis regarding the need of PP encompassing the entire issues.

The problem with WikiLeaks actually being Assange has to do with the event that Assange is found guilty.

I agree, from what has so far surfaced regarding the potential guilt of Assange, it would surprise me if he was found guilty. Never the less, would that occur the important function of WikiLeaks in establishing better transparency in this world, could be seriously hindered.

Having said that, it is a bloody shame that news media in Sweden has not reported a single thing about the cables regarding PP and how it seems that diplomatic pressure - no matter how subtle - has been placed on our Swedish democratic representatives. Imagine if any of the established parties would have been the topic of discussion at this level of political affairs?

Enabling Reinfeldt to get away with "we don't comment on WikiLeaks related issues" is also a sad state of affairs and in so many words show the lack of integrity news media is having even in Sweden.

Almost forgotten by now is the lack of reaction from the bigger news establishments on the issues of how WikiLeaks have been treated by US interests. It is truly a disgrace and a true sign of a democracy in an appalling state.

To round it up, WikiLeaks and the democratic principles under attack in relation to WikiLeaks needs support but I would prefer to separate the issues of Assange until the eventual court case is over and done.