Brita Sundberg-Weitman is an Associate Professor in Sweden and a former Judge. It is Sundberg-Weitman's professional and academic experience, her expertise-knowledge on the Swedish judiciary, what  makes her witnessing valuable about   Marianne Ny's doings as prosecutor in the public Assange case: In judging to which extent are those public doings - as prosecutor or commenter - congruent with acceptable Swedish judiciary praxis. Whether Sundberg-Weitman is personally acquainted with Ny or personally with the case itself is downright irrelevant. And the fact that she is NOT can hardly speak against her testimony.

A Washington Post article by Anthony Faiola and Karla Adam ("Assange attorneys cast doubt on accusations at extradition hearing in London", 8/2, 2011), reports the testimony in court of Brita Sunberg-Weitman which put in serious doubt the objectivity of Marianne Ny.  The Washington Post article refers prosecutor Ny been portrayed  "as an overzealous women's rights crusader with a bias against men". Expectedly, "Crown prosecutors representing their Swedish peers rejected the assertions". On which grounds?

The notable point that the prosecutor for the Swedish side, Clare Montgomery,  did try to make it was that witness Brita Sundberg-Weitman would not have an own personal knowledge of Ny's conducting the case nor personally would have met Marianne Ny. That it was. The Guardian (7/2) resumes in the subheader of the article of Esther Addley "Julian Assange 'would face bias in Sweden', retired judge says":


"Sundberg-Weitman accuses Swedish prosecutor of being 'malicious', but admits she has no personal knowledge of her"

Brita Sundberg-Weitman is an Associated Professor at Stockholm University and a former Appeal-Court judge (lagman) with vast experience, and she has also been president of the nation-wide human-rights organization Medborgarrättsrörelsen. 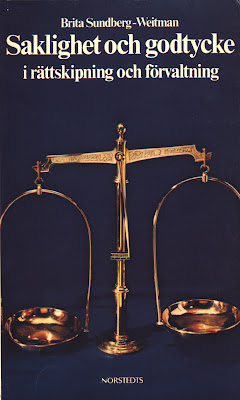 Assange’s lawyers could instead  well argue that the issue of this witness value (in the context of whether the accusations AND procedures put forward by Swedish prosecutor Marianne Ny's are tenable in the Assange case) has primarily to with how well Associate Professor Sundberg-Weitman  would know the judiciary system in Sweden, and she certainly does, particularly on the issue at stake.

Ergo, it is solely her professional and academic experience as such the valuable parameter for judging whether prosecutor Marianne Ny’s registered doings as public-prosecutor or commenter are or not in consistence with acceptable Swedish judiciary praxis. Other issues for instance that witness Sundberg-Witman stated in London "she had no personal acquaintance with Ny" (The Christian Science Monitor, 8/2) are in the context  wholly irrelevant.

Furthermore, if the witness would have had a personal or desk-professional acquaintance with Ny, then her witness report should be scrutinized from the view as to what that relationship would signify for her statements.