Emotive moments and warms applauds at Genoa Serra-Riccó during the public ceremony celebrating the 550 anniversary of the Cape Verde discoveries by Genoese navigator Antonio de Noli, the first European Governor in Sub-Saharan Africa. 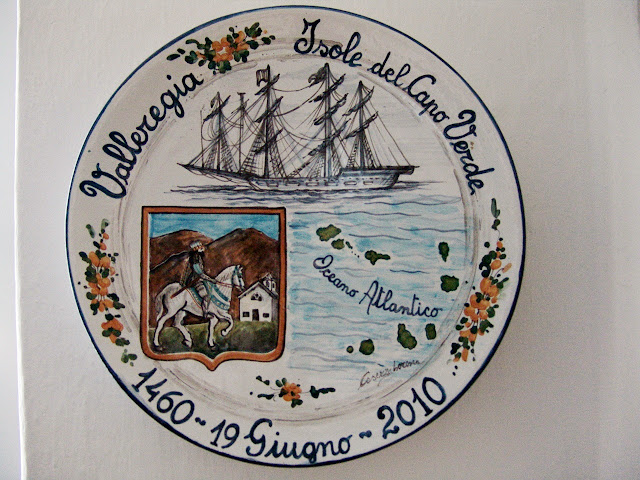 Above: Handcrafted Art-Plate donated to the author by the descendants of the De Noli family in Valleregia. Other recipients of the honour were Cape Verde Ambassador Jose Edo. Barbosa and the Major of Genoa - Serra Riccò Dott. Andrea Torre 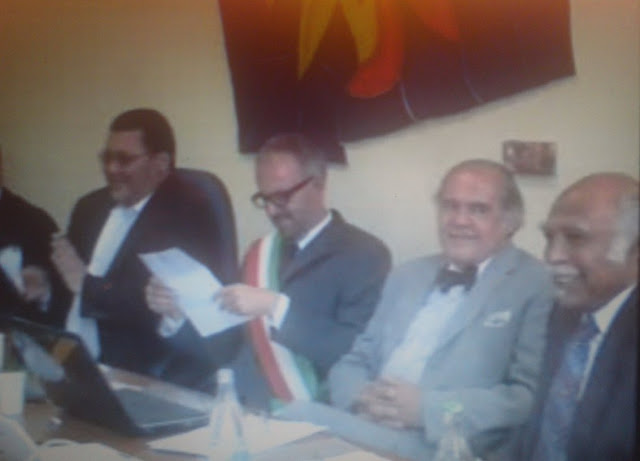 The happy podium at Genoa Serra-Riccò Town Hall: Dott. Jose Edo. Barbosa (CV Ambassador to Italy), Dott. Andrea Torre (Major of Genoa Serra-Riccò), Prof. Marcello Ferrada-Noli, and Dott. Marcel Balla (President, respectively Vice-Chairman of The Antonio de Noli Academic Society).
The video below from a documentary/program by the Italian TV-chanel Primo Canale on the event in Genoa - Serra Riccò of June 19th and showed June the 25th. It contains footages done in Cape Verde and interviews in Italy with the Major of Genoa - Serra Riccò Dott. Andrea Torre and with the President of the Antonio de Noli Academic Society Prof. Marcello Ferrada-Noli. Youtube posting by Luciano Marmi, Genoa [Click on image below to view the video] 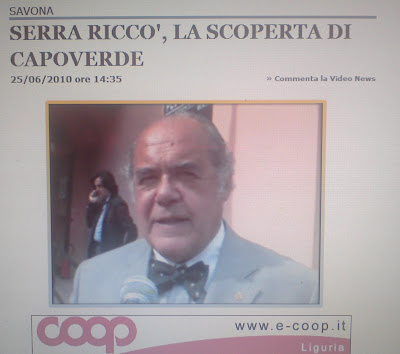 The Cape Verde Ambassador Jose Eduardo Barbosa was very much applauded when he said significant meanings on the origins of Capeverdeans. This, as follows, is my version of his message (not exactly the Ambassador's words), and as I recall it to the best of my knowledge.


Cape Verde had not "aborigin habitants" like in the rest of African countries colonized by the Europeans. Instead, Capeverdians started to exist as such after the deserted islands were discovered by Antonio de Noli and subsequently populated by this unique cultural constellation of Genoese, West Africans, and Lusitanians.

Cape Verde would be the only country in Africa deprived by Nature of its traditional resources such as oil, large forests, etc. "But we, the Capeverdians, we are instead that natural resource". Ourselves, our people, our families, our optimism, our creativity and enterprise-spirit, the friendship towards the visitor, our advocacy for peace.
The Major of Genoa - Serra Riccò manifested also valuable reflections. He said on the research findings on family migrations and the historical link between the De Noli descendants in Genoa - Serra Riccò and the discoveries of Cape Verde: 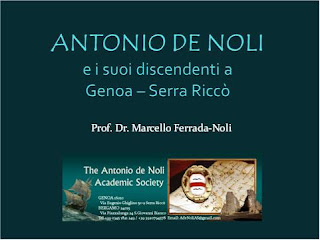 [Full text in English here. For the slides of the presentation go to AdeNoliAS Cultural Bulletin].
Marcel Balla, the Vice Chairman of the Board of  Antonio de Noli Academic Society said: 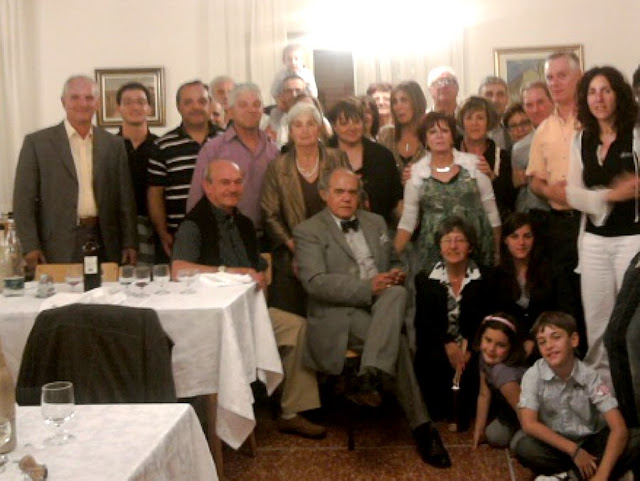 Beautiful moments and warms applauds also - and excellent Italian gastronomic art - at the dinner offered by the De Noli descendants and the municipality of Serra Riccó to the Ligurian authorities, the members of the diplomatic corps represented at the event, the Church, and to the members of the board of the A de Noli Academic Society. A pictorial will follow in a future updating or new post. There were many speeches, among other by monsignor here below. 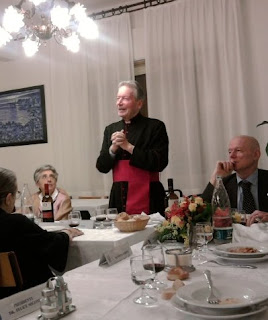 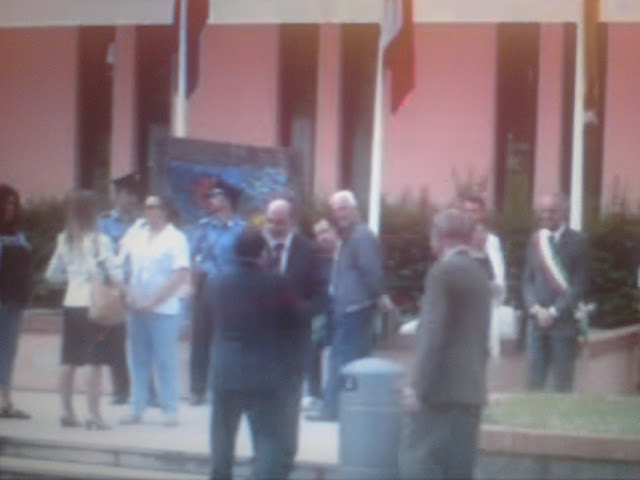 Update 7/7. More pictures sent by Luciano Marmi on the 19/6 event  in Genoa - Serra Riccó.  The pictures are taken from sequences of the TELENORD TV-news program (video to be posted later in Youtube). 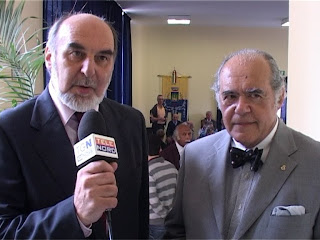 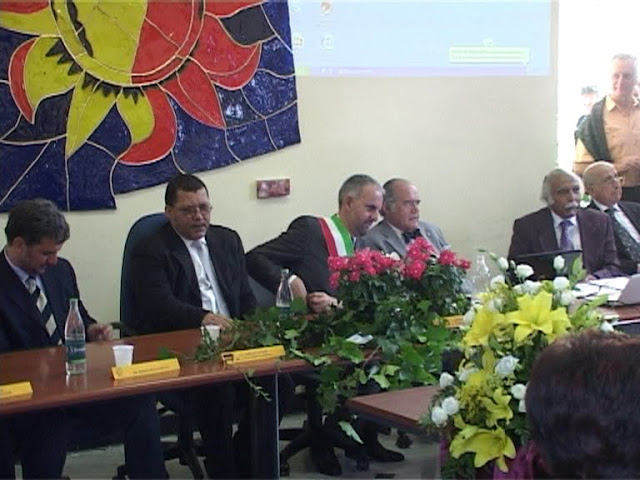 The podium, as described before. Also, at the picture's far right the Consul of Ucrania. Standing, Luciano Marmi 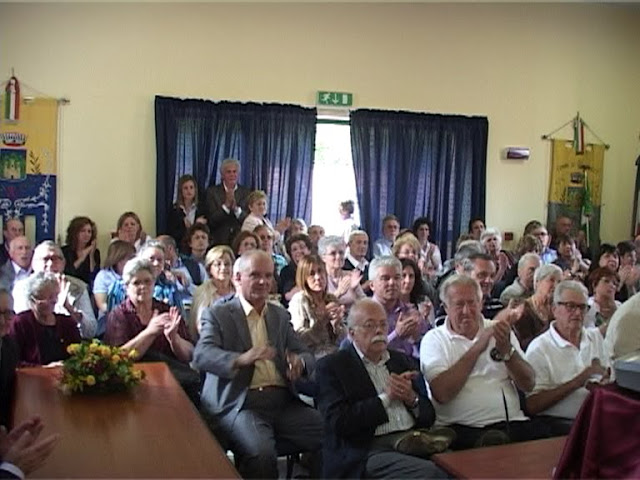 The public at the left wing of the auditorium 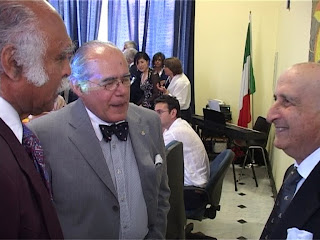 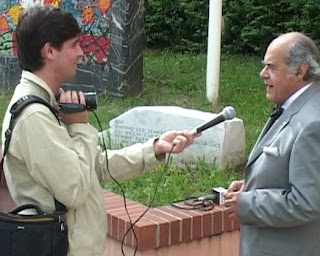 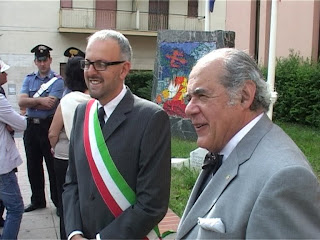