The political panorama in Sweden has been in the last weeks to a great extent dominated by a debate on issues of civil liberties in conjunction to a remarkable wirettaping law recently approved by the Swedish Parliament. The law (FRA lag) is considered by growing sectors of the population to compromise fundamental democratic rights, such as rigth to privacy in telephone and postal communications, email, internet sites connectivity, etc.

According to BBC, "the country's intelligence bureau will be able to scan international calls, faxes and e-mails" and "will no longer need a court order to begin surveillance, unlike the police". USA today refers the "sweeping powers" Swedish officials would have obtained for the purposes of eavesdropping. Political reactions towards the new law have also been reported by Le Monde.

On the other side, the right-win government and the political parties supporting it, still maintain a staunch position in favour of the law, which, as it has been nowadays revealed, would have been the initiative of senior administrative officials in and around the defence establishment. Government officials put forward that the new law only aims to the modernization of state intelligence-gathering and in no fashion it aims to target democratic rights of the individual or their intimacy. It is also paramount in this law, they affirm, the commitments of Sweden regarding other countries’ intelligence gathering. The law is due to be enforced from January the 1st 2009. Some statements from the supporters of the FRA-law in this dispatch from AFP.

Nevertheless, the new law would give a main intelligence agency of the Swedish Defence (Sweden’s National Defence Radio Establishment, Försvarets Radioanstalt) - an institution primarily set to spy and detect signals from abroad that may pose risks to the country’s security - the possibility to scan all kind of electronic traffic passing Sweden from abroad and out. Also, the possibility of passing selected information to intelligence services of other countries. Not even dictatorships would be excluded from this exchange of information with Swedish intelligence services [The Local], althought this exchange-task would not have been directly, or necessarily, conducted by FRA, as it has been lately explained in main Swedish newspapers [DN, DN2, DN3, Sydsvenskan, SvD] (later news also reported on a intelligence-exchange agreement that would have been signed between Sweden and Saudi under the previous social democratic government).

However, whether it will be FRA, directly, or other Swedish intelligence agency, or any ministerial channel the one which eventually will pass that information to the intelligence services of another country (including dictatorships) appears totally irrelevant in the context of this debate. For the main issue FRA-law opponents have raised in this regard has to do with the gathering of such information which it will be conducted by FRA amid procedures that would infringi basic human rights.
..
Secondly. While politicians of the left have with some exceptions kept a rather low profile in this dispute (opposition leader Ms. Mona Sahlin have announced the derogation of such law in the event the Social Democratic Party would win the next elecctions), several members from the coalition of parties supporting the government have increasingly taking positions against the FRA lagen, among them six Parliament members of the Folkpartiet, a party officially self-described as liberal. Besides, the Social democratic party as well as the Environmental party and the Left Party (formerly the Swedish Euro communists) voted against the law in the parliament by June this year.

One remarkably aspect with the FRA-debate is that it has successively appeared being the top of an iceberg which never ends, no matter how much it comes to the surface. Always a new issue apparently detrimental for the citizens' basic civil rights. The last of these findings relating private actors in the surveillance business. With all, the voices most heard in this debate – none the least widely quoted by the traditional media - have been those of the Swedish blogosphere. The blog production has been undoubtedly in the increase on the issue.
"Bloggbävning". Found in a post of Blogge Bloggelito 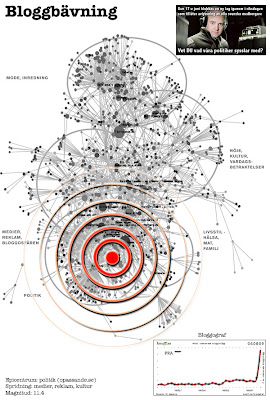 In my opinion, the effectiveness of the bloggers’ output is not to be regarded solely as a phenomena of an increasing role of the bloggers as source of information in the general public.

The popularity of the civil-liberties blogs also derives, partly, of their novelty. Blogs are indeed an emerging qualitative phenomenon in the Swedish media and political arena, and quality blogs are taken more and more into consideration by the traditional media, news papers and TV channels.

Most of the blogs on this issue of debating the wiretapping legislation reproduce information and news and multiply links posted by other bloggers, and so on. This have resulted in an enormous quantitative network that have demonstrated vitality and readiness the Internet public. I would characterize these blogs as "Agi-Pro", of a mainly agitation-like contribution.

Some others blogs have shown an analytical capacity of scholarly level and remarkably originality. Another, also relatively small group of bloggers, have contributed with new informations and perspectives of clear journalistic value. This was more noticeable during the summer vacation period which naturally included many politicians as well as journalists. But not many bloggers. They "kept the flame alive".

A site called wirettapingsweden.com has now relased a video in English, Wirettaping Sweden, intended to explain the reactions of the blogosphere and others in regard to the FRA-lag. Among these bloggers - some of them often quoted as having high impact index (as measured by linking-frequency), and others equally interesting - are found Blogge Blogelito, Oscar Swartz, Ema (Opassande), Rick Falkvinge , Christian Engström, Mark Klamberg, Henrik Alexandersson, Anna Troberg, Scaber_Nestor, Erik Laakso, Pär Ström, Isobel Hadley-Kamptz, Christopher Kulllenberg, Copyriot, and several others. You may find here and there some texts in English (or Chinese!) and some useful links on the FRA issue. There is also a blog of Impecho, in English, quite informative from the side of FRA-law critics. For Swedish news in English you may also wish to visit The Local.

I personally do not agree with a variety of theses or perspectives put forward by the above mentioned debaters. Well, that is the point with blogging too! However, and generally speaking, some texts carry the spirit of old good left liberalism. I would mean this in view of the theoretical reference underneath their contingent analyses, their stand in the issues of state institutions and its relationships with civil liberties and independence, and also, why not, for the means used in the debate. A sincere appealing to oppose reasoning against belief and prejudice, trying to put together logics and history, intellectualism and social reality, and exploring the synthesis of humanism, responsible individualism and social solidarity. Of course this is not all what progressive liberalism is about, but part of it.

I hope to soon elaborate on the possible relationships to be found between the rationale for a FRA-law and significant changes adopted in the Swedish foreign policy during the late years. A process implicating also the previous government, under the Social democratic party.