My "Mourning sea" became poster at the University of Wales 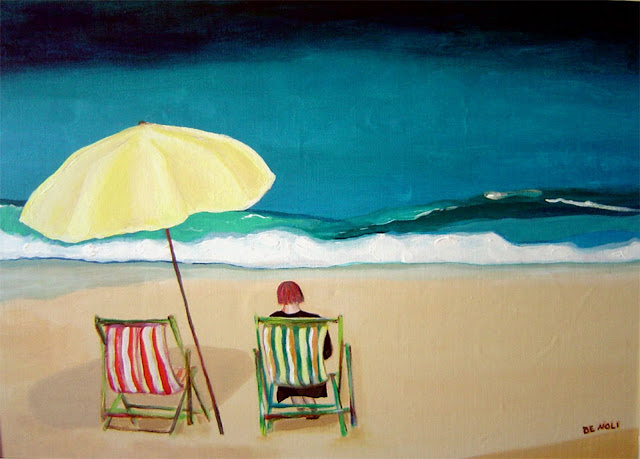 It now became a poster for the Conference on Widowhood in History, Culture and Society, at the University of Wales Swansea 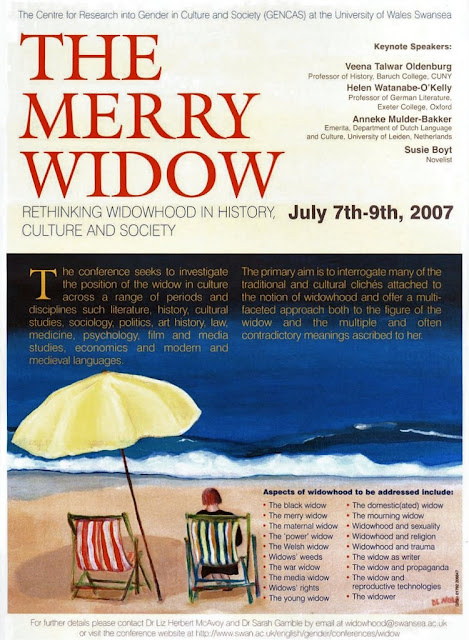 click to enlarge
Posted by Marcello Ferrada-Noli (Sweden) at 8:34 pm No comments:

New unsubstantiated alarm on pathological burnout (utbrändhet) in Sweden. Where is the proof?

Hearing problems risk leading to pathological burn-out ("hörselskador riskerar leda till utbrändhet"), it is now reported. The "scientific discovery” appeared as the chief headline-news in the front page of the main Swedish newspaper Dagens Nyheter 24/12 2006. But, where is the proof? 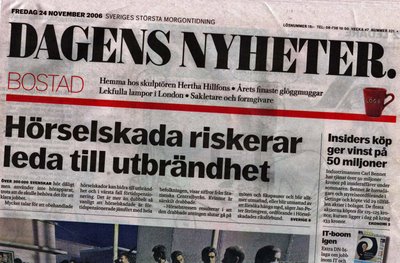 There are whatsoever no news-value in reporting that problems in hearing adequately can lead to irritating and stressful statuses in both the one with the hearing problem and his or her interlocutor/interlocutors. Neither can it be found any controversy in stating that a given fraction among the individuals with that partial or minor hearing handicap is in fact not aware of their disabling. Being the last category identified in the article as “hidden hearing-problem” (individuals with “dolda hörselskador”).

But to infer from the above statements, that “hidden" or unknown hearing problems is a cause of pathological burn-out / utbrändhet (a Swedish "diagnostic category" which in its turn can easily makes the individual eligible for long lasting sick leave and subsequently retirement - beyond medical verifiable proof), it is logically untenable and unscientific. And most sensitive, it leads to unfounded alarm among the public, and to increasing missconceptions.

The “facts” sustaining the alarming report

When we look into the article’s text we do not find whatsoever any conclusive scientific proof, no epidemiological evidence, for the main statements in the headings. The ONLY thing there offered is: 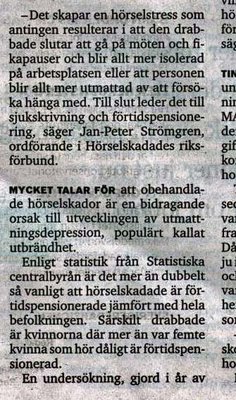 And what is that “Very much”, or what is the source for that clinical conclusion which can be epidemiologically bound to pathological burnout?

Well, that the chairman of the interest-association of individuals with hearings problems has said to the journalist that some teachers eventually feel isolated and tired in their efforts to follow (hänga med) the conversations in the coffee break!

All the rest of statistical-filling in the article have absolutely no bearing for the stated conclusions. For instance information on the percentage-estimations among women teachers with hearing problems which do not use technical aids, etc. Or that nearly the half among the women (why not men?) that early retired from their teaching jobs reporting to have a hearing problem.

At the very same time, puzzling enough, the article reports that two thirds among those teachers above have never being to a doctor specialist in hearing problems!

Is it stress or environmental noise what causes the hearing-impairment? 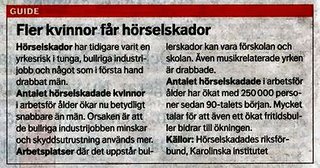 Further, what is the evidence - as the article implies (see the "Guide" box inserted in the article) - for that the noise at pre schools or schools in Sweden is significantly worse now than it was during the free and indulging seventies or eighties, during the "laisse faire" pedagogic era (the "let-them-behave-as-they-feel" educational rule)?

Or that since the "beginning of the nineties” music it is played at significantly higher volume in comparison with the seventies or eighties?

These alarming – most often unproven and unsubstantiated – media reports, do seriously contribute to the false notion among the public that they may suffer of such pathological stress that it makes them difficult or impossible to perform socially, with their families, or to fulfill even partially their jobs. 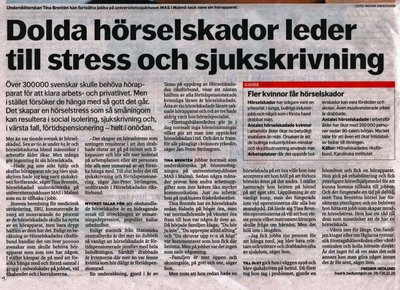 The question is also why Dagens Nyheter, otherwise a serious and well reputed major newspaper in Sweden, has seemingly indulged this pro-utbrändhet campaign?

Just how many articles or reports which are critical, or even offer factual and scientific proof against the utbrändhet-thesis, are given space in the newspaper?

Posted by Marcello Ferrada-Noli (Sweden) at 12:42 pm No comments: