Does really OVER THE HALF of Sweden’s young women suffer of burnout? More alarming figures in the Swedish Radio

The Public Service / Swedish Radio programme The Scientific Radio announces today’s - in its main news - the circulation anew of Dr. Aleksander Perski’s book Ur balans "that comes out in a new edition today”.

Psychologist and Associate Professor Aleksander Perski, who according to the broadcasting "is also the chief of the stress clinic (Stressmotagningen) that operates in cooperation with the Karolinska Institutet", states himself in the Scientific Radio:

The journalist of Scientific Radio:

"He (Aleksander Perski) has done himself the investigation contained in the book that comes out in a new edition today. Two hundred students of second year at three high schools in Stockholm had answered a questionnaire about life-style and selfconfidence. And over the half of all the girls complained about symptoms of exhaustion such as problems in concentration and sleeping problems" ["Han (Perski) har själv gjort studien som finns med i boken som kommer i ny upplaga i dag. Två hundra elever i årskurs två i tre gymnasieskolor i Stockholm fick svara en enkät om livstil och självkänsla, och över hälften av alla tjejer klagade på symtom på utmattning som koncentrationssvårigheter och sömnproblem"].

The author finally warns in the broadcasting on the perils of the vulnerability that this (stress-related) problem among Swedish young women represents, towards a worsening of their health as adults. Several adult women - as patients at Stressmottagningen, says Perski - have rooted their problem to their school years.

Provided that the measurements are correct (as surely they are),

I assume that a problem of such epidemiological magnitude as the reported now by Vetenskapsradion among Swedish girls ("over the half” of all girls suffering of symptoms of exhaustion) would have determinant consequences in the scholarly performance.

However, just recently - in fact during the last week - the news reported that Swedish girls have a better school performance than Swedish boys have.

Would this mean - paradoxically - that boys are even more represented in the statistic of exhaustion symptoms than girls are?

As a matter of illustration, allow me to remind that also today (16/10 2006), the same Swedish Radio reported a notably increasing in the number of young women - i comparison with their male counterparts - being selected for admission to (the hard competitive) medical schools. The trend further shows than more women doctors than men will be soon the reality in Sweden. Would the findings commented here indicate instead a panorama deterioration in the expected academic future of young women decimated by pathological stress or exhaustion-depression symptoms?

So, what is what?

Alarming figures on increasing stress, emotional exhaustion and burnout among sectors of the Swedish population - from the part of stress researchers or companies with professional interests in current rehabilitation programmes - are of course no surprises here. It is in fact just natural, or understandable, that those professionals would try promoting the results of a research which is close associated with the declared aims of such enterprises. But this is not my main objection here. The main question here is instead:

Why the Public Service media gets over and over tuned in this repeated wave of broadcasting "stress" alarm among the Swedish public?

At the same time, at the same public service media of for instance Swedish Radio, while politically correct stress researchers are called one after the other to exhibit their unopposed parade of alarming - and to certain extent dangerous - statements, no equivalent space is given for scientific analyses that may question the official epidemiological deception - in the sense of genuine massive epidemy - of the phenomenon called utbrändhet.

Less than a year ago had Aleksander Perski in a long interview done by the same Channel 1 at the Swedish Radio bluntly broadcasted to the Swedish people - with no direct reaction from the part of the interviewing journalist- the following arbitrarian figures (with regard to how many among the Swedish people would at the time have poor health, meaning "feeling bad due to stress"):

The figures given by Perski means nonthing less than THREE MILLIONS of Swedes having this problem upon their mental health. A problem for which the best treatment, or "rehabilitation", according to Perski himself, would be found at Stressmottagningen.

All above it remind us of

a time back in the history of the Swedish burnout epidemiological deception, where we find the following headline in the front page of the evening paper Aftonbladet - also after an interview with Aleksander Perski (and Jovan Rajs) 2000:

"SWEDES ARE DYING OF STRESS"

I have no evidence that Aleksander Perski himself had publicly concluded the desvatating statement above, published in an Aftonbladets' frontpage, and I do not believe he has done that off the record either. But the media has its own so called dramaturgia and uses research results - or the opinions of researchers - in their own bussiness of magnifying the presentation of a problem. 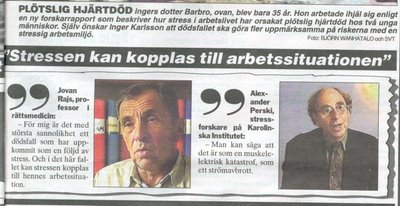 Anyhow, the statement was also a clear exaggeration. Such epidemy did not exist then and never existed later either. As I could soon later established in an article which I published in the Swedish Medical Journal (Läkartidningen, 97, 50, 2000). Among women in working age, less than two women per year died of "sudden death", respectively less than six men. And above that fact, the year trend in such deaths was actually decreasing during the "stress years" of the nineties.

When will Swedish serious journalists and editors - in this case from Swedish Radio - understand that an important segment among the worries ("oro") affecting the mind of the public are those based, or contributory-caused, by the often alarming reports on "increasing (pathological) stress" broadcasted / published acritically by the Swedish media?

As for Dr. Aleksander Perski, he is just doing his job.

Posted by Marcello Ferrada-Noli (Sweden) at 12:47 pm No comments: