Is it really ''stress'' what causes the main problem among Swedish students? 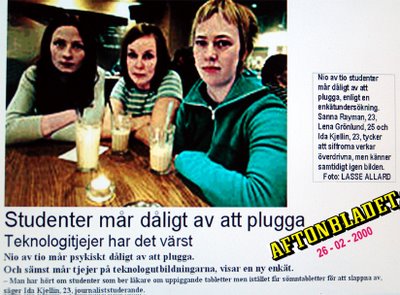 The fact is that women and men (particularly women) with higher education and social status are significantly more prone to declare that it is stress and psychogenic reasons those behind their problem in their working places.

And the fact is that copy-cut blaming of "stress" is not new among Swedish students. Actually, comparing old reports(2000) with new ones (2006) the "problem" has notably diminished. (The photo is from Aftonbladet 26/2, 2000)

These are my theses in this presentation: 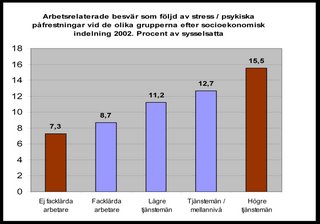 The newspaper Expressen ran recently an article referring to a supposed growing stress among Swedish university students. This stress, according the paper, would be that aggravating or detrimental, that it is actually “decimating” the students.

Much of the article refers to the Student Union own study “Stoppa pressarna”, an investigation conducted on the mental devised to characterize the health status among the Swedish students. The study have concluded that mental health problems deteriorates increasingly, being reason for a serious concern.

I have examined this study and found that in its turn it is much based in another investigation, the TRIA-Rapport, conducted by the company REWIND, under assignment of the employees and students unions HTF, SKTF and ST.

As typical in this sort of assignments, the main question in the Tria report was not to find out whether the student experiences stress or not, but “up to which level they experience stress” (“I vilken utsträckning känner du dig stressad?”).

No wonder that their results were “that stress is a very common problem among the students”, and 52% agree with the formulation (Rewind’s formulation) that to a great or very much extent they feel them selves stressed”. Also predictably, the vast majority (61 %) of the respondents were women.

Please do note in this context that the main issue in the debate in which this population study is used, is the "increasing poor health, particularly mental health, among the Swedish university students".

So, publicly manifesting the "problem" of high levels of stress is a means of implying the students' poor health. But what is not tell explicitly is what is really what we are measuring in those studies when we refer to stress, and how established and reliable the findings can be from a clinical or an epidemiological standpoint.

First, trying to identify pathological or negative stress, we have that the questions in these sort of studies (now I refer to one study SFS in its turn praise in their cited document) are such confounding and unprofessional. For instance, they embed the item "stress", together with "worries" (oro) and feelings of "sort of anxiety" (which is not the same than proper anxiety).

Meaning the one who in a given moment has felt "oro" (and who does not that naturally from time to time) is categorized as having stress. And not only "stress". The interpretation goes for it is a "negative" stress, unhealthy stress, etc. All which in its turn would explain the need for, or the current existence of, a widespread sick leaves among the students.

So, to have "the feeling", or having the "idea" of being ill due to stress, can be sufficient according the Swedish general interpretation, for granting a sick leave to the stressed students? 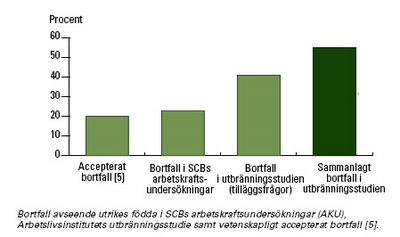 As a professor in public health sciences, especially Epidemiology, I have to frankly state that the results of the Tria investigation doubtfully meet the scientific standard for reliable conclusions on the main aspects investigated. Why?

Apart of the above, the main flaw being the remarkable low response rate (33%) they achieved in their investigation, all which means the investigation had a dropout of 67 per cent! In effect, they have asked 4 500 students and they got only responses from 1 303.

As it can viewed in the diagram on the box (from an article I published in the Journal of the Swedish Medical Association, Läkartidningen), the accepted dropout for such studies (to be eligible for review or publication) in scientific journals is only five per cent (see the all article here). I will develop later a comment on the Tria-rapport in reference to socio-economic indicators characterizing the university students' situation.

Even worst, was the account of the results (contained in the above investiagtion) made by the study Stoppa pressarna (SFS). Here the authors did not even bothered to mention that the dropout responses in the Tria-Rapport conducted by Rewind were as high as 67 per cent, knowing that the hidding of this methodological fact absolutely alters a true interpretation of the results. The only thing mentioned was:

In searching for answers "about stress among university students", those who are certainly more engaged and eager to participate in such studies are those who either experience that "stress" or have been told that the problem they confront in their existence as students is "stress" and "burn-out" (utbrändhet) and not other problems. In this fashion, the results of the population study will NOT reflect - with minimal acceptable level of certainty- the situation of the Swedish university students as a whole, but of those who felt them selves "called" for participating in the study.

And this is why the scientific journal Evidence-Based Medicine (1995) has pointed out a minimum of 80 per cent responses-rate, and 80 per cent in follow-up rates in post-tests, for a study can qualify for reviewing and eventually publication in such scientific journal. (see Bowling A., Research methods in health.Philadelphia: Open University Press; 1999:163.). This is the methological principle that, to the best of my knowledge, is applied by every serious scientist (a few of them is not) at the Karolinska Institutet.

Nevertheless, talking about students' stress, one first question is to asses whether the 310 000 students organized by SFS are much different from the rest of the Swedish population, in terms of their vulnerability for “stress” and “burn-out”.

In this respect we have the fact that students, due to their both social and intellectual position, are as equipped, as any well educated people, to better understand psychological concepts such us stress and burn-out, and to express verbally accordingly those notions.

The fact is that women and men (particularly women) with higher education and social status are significantly more prone to declare that it is stress and psychogenic reasons those behing their problem in their working places. 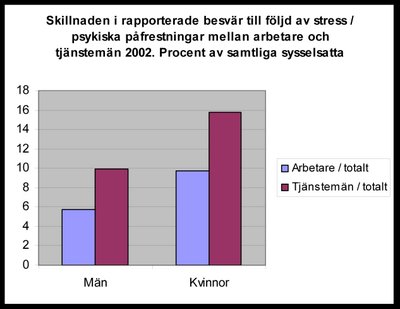 The above is the result of an investigation we conducted at the Karolinska Institute (Ferrada-Noli, Svanström) and which has been reported in an international conference in Hongkong. 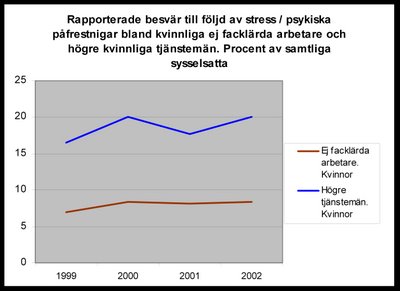 The diagrams are part of our presentation and should not be reproduced without permission. See abstract here: :(http://www.hig.se/~mnf/pages/Ferrada-Noli%20ABSTRACT%20NR%201.doc).

A second question is to clarify whether all student-branches (careers, programmes, etc) share such common situation as to refer to the Swedish university students as a whole. In this respect appears that only certain programmes, such the Law-studies programme, poses higher levels of psychological demands on the students. This is not related to the studies their selves, but to the hard requirements of highest marks in order to qualify for further positions in the juridical system of Sweden.

A third relevant question is whether this is a new situation among the students, as it is implied. Or even, as clearly manifested, if it is a situation that worsens more and more.

The problem is not new and the blaming of stress by the students started just coincidentally with the appealing to stress/utbrändhet which "stress researchers" made fashionable in näive Sweden in the begining of the 2000's. (see here my debate article in Dagens Nyheter) . In the article run by Aftonbladet 26/2 - 2000 about stress and health problems among the students it reads:

According to the Aftonbladet article six years ago, 86 per cent among the students asked by the newspaper Campus declared that their studies had a negative impact in their health.

Now, in 2006, the studies mentioned introductorily talks of 53 per cent of stress (Rewing study) among the students. The "stoppa pressarna" report mentions a wide range of less stress among students of different programmes. From the Humanities-faculties 8 %, from the Art programmes 39 %. Only the Law students show no change in comparison with the figures in Campus 2000.

Of course that none of the above studies emphasize that in fact it is about reports by the students of feelings of being stress, which is a totally other concept than the clinical established pathological, damaging negative stress. Not to mention the miserable figures on their responses-rate

As I concluded in a critical analysis - published in Läkartidningen - on the methodological blunders of another "utbrändhet" study authored by Arbetslivsinstitutet's Lennart Hallsten (also helping the authors of Stoppa pressarna):

Posted by Marcello Ferrada-Noli (Sweden) at 11:42 am No comments: